Growth stocks are in a bear market, plain and simple. As a result, Pinterest (NYSE:PINS) has been obliterated and PINS stock is now down more than 50% as a result.

As if the selloff in growth stocks wasn’t bad enough, social media stocks have been under pressure, as well.

Snap (NYSE:SNAP) and Twitter (NYSE:TWTR) are down about 40% from their respective highs. Meta Platforms (NASDAQ:FB) is down 19% from the highs.

The situation with social media stocks — and Pinterest stock specifically — is not great at the moment. Sentiment is in the toilet as the companies struggle with Apple’s (NASDAQ:AAPL) new privacy rules as growth stocks slump. In Pinterest’s case, the company also has user growth issues.

While the company saw a surge in users due to Covid-19, it’s now having trouble with user growth as the world continues its return to something closer to normal.

Despite the sluggish user growth, revenue growth and earnings have been pretty impressive. It’s like Pinterest is two businesses where one remains resilient and impressive (the top- and bottom-line) and the other business is now disappointing (user growth). Unfortunately, the latter means quite a bit when it comes to social media stocks.

Shares were down 20% as Pinterest went into its second-quarter earnings report in late July. Along with a top- and bottom-line beat, consensus revenue estimates among analysts actually went higher after the quarter.

Admittedly, revenue estimates eventually ticked lower (from $2.62 billion to $2.56 billion) after the most recent earnings report in November. However, by the time of the report, shares were already down 50% from the highs as investors began pricing in disappointment.

Currently, consensus estimates call for 51.1% revenue growth this year and 26.8% growth next year. Estimates for 2023 call for an acceleration back up to 31% growth, but it’s too early to know if that’s accurate. Still, judging by the stock price, you’d think there is little to no growth here, not 25%-plus annual growth.

The Company Is Also Profitable

In addition to its revenue growth, PINS stock trades at 31 times next year’s earnings estimates. While that’s not screamingly cheap, it’s important because it implies one key observation: Pinterest is profitable. The company earned 42 cents a share last year and is forecasted to earn $1.10 a share this year. In 2022, estimates sit at $1.35 per share.

That observation forces me to look at the margins, which are quite impressive. Pinterest is operating with gross margins of just below 80%, just shy of Meta Platform’s 80.8% gross margins. It’s far and above the results from Snap and Twitter.

When we flip to net margins, Meta Platform holds strong at 35.9%, while Pinterest is down at about 14.3%. However, that’s still far better than Snap and Twitter, which currently boast negative net margins.

These may not be screaming-buy observations and metrics, but there is clearly some value here in Pinterest. The company has 20% to 30% revenue growth estimates for the next several years and continues to grow its bottom line. Plus, its balance sheet is incredibly healthy, with $2.3 billion in cash and virtually no long-term debt.

As for its user growth struggle, it only makes sense that users surged during Covid lockdowns, then retreated a bit once lockdowns and restrictions lifted, and as summer was underway. 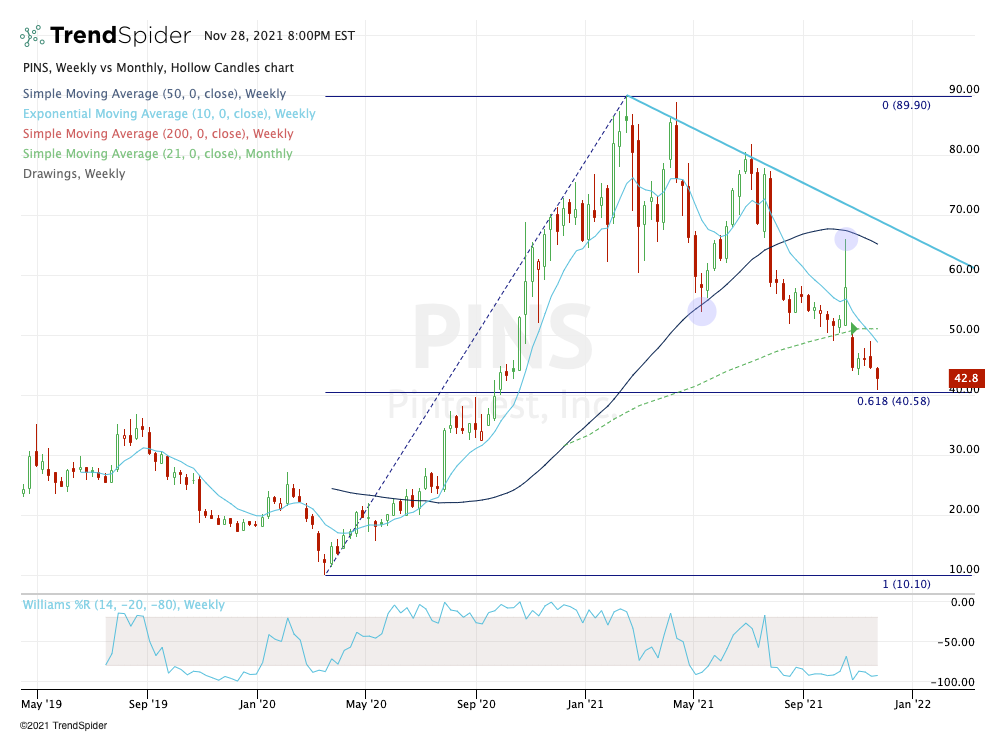 Last but not least, we have the charts. The technicals are not shouting out any sort of “must-buy now!” signals. In fact, PINS stock looks downright dreadful, as do many growth stocks.

Add in the Covid-related surge and retreat — remember, volatility works in both directions — and it makes it even more frustrating as a shareholder.

However, the simple fact is that growth stocks go through growing pains.

Apple, Amazon (NASDAQ:AMZN), and every other success story has gone through it. I even made a YouTube video about it, explaining why I like to start accumulating high-quality stocks that are down 40% or more from the highs.

When you look at the charts, there’s not a lot to love as PINS stock is below all of its major moving averages — daily, weekly or otherwise.

However, it’s bouncing off the 61.8% retracement. That’s not much to go on, but let’s see if we can pair it with some sort of reversal or rotation higher.

Either way, it seems like the stock is now discounting some of the longer-term catalysts that are, in my opinion, still in play.