Wall Street has been very excited lately about an old darling, Netflix (NFLX), thanks to its very successful series, Squid Game. Approximately 142 million member-households watched the show in just the first four weeks of its release.

That news drove the stock to an all-time high at just above $700 a share, rising about 23% over the past three months.

However, Netflix management realizes it is next to impossible to deliver hit after hit. That is why the streaming service is trying to boost its product offerings by adding video games.

The strategy makes sense, but Netflix is facing a major impediment to its plans in the form of Apple (AAPL) and its strict App Store policy regarding cloud gaming.

Can the strategy still succeed? Let’s take a closer look.

In the first week of November, Netflix launched five games through the Android Google Play Store, including two linked to its hit show, Stranger Things. Many of the show’s fans that cannot wait to dive in to “The Upside-Down,” the strange and terrifying alternate dimension depicted in the show.

The games are available to Netflix subscribers. And the nice thing is that there are no ads, additional fees, or in-app purchases.

The company had planned to extend its gaming reach to iPhones as part of its strategy to “build a library of games that offers something for everyone,” but Netflix ran into a major roadblock: Apple’s reluctance to provide cloud gaming services through the App Store.

That means—at least for now—it will not be possible to play the games through the Netflix app on the iPhone or iPad, according to a Bloomberg report.

This is not new for Apple. It has a ban on all-in-one services that would allow a game to be offered within an existing app. Last year, Apple stopped Microsoft from launching its xCloud gaming app through the App Store. It did approve Facebook Gaming, but only after Facebook agreed to strip down its library of playable games.

According to Bloomberg, Netflix will release all its games on the Apple App Store individually, like it has just done on Android. However, unlike with Android, it won’t be possible for Netflix to launch a cloud gaming service for iPhone and iPad users in the future, unless Apple changes its rules.

Of course, this whole space is in a state of flux, thanks to the legal challenge to Apple by Epic Games. The judge in that case did rule that developers should be able to add links to external payment options within their games. 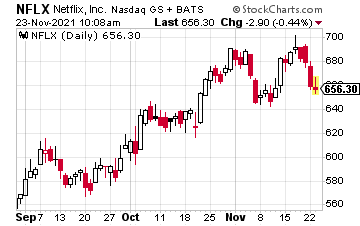 Netflix is hoping more changes are in the works.

That’s because Netflix really needs a boost, as its subscriber growth has been falling after the pandemic-aided surge in 2020.

In the last quarter, year-on-year membership grew just 9.4% to 214 million. At this time last year, the company enjoyed a 23.3% growth in membership. The good news, though, was that revenues were up 16.3% due to a 5% year-on-year rise in average revenue per member.

The reality is that even gaming will not add many new subscribers to Netflix’s base. However, gaming may keep its current base placated as the company gradually raises its monthly fees.

An entertainment industry research firm, MIDiA Research, found that mobile gaming is very popular with Netflix users already. Surveys by Midia show that 71% of mobile gamers subscribe to Netflix compared with just 43% of the wider population.

So—at worst—Netflix is defending its core business. And if its management plays it right, gaming could turn into a big business for Netflix and a profit center, as long as it can expand its gaming offerings to more than just a handful of games.

Until its gaming efforts gain steam, though, the company does have some macroeconomic tailwinds aiding it.

All of these metrics underscore both the highly fragmented nature of television viewing and the company’s opportunity for continued market share growth.

Netflix management expects to expand its market share at the expense of cable and satellite television rather than from its streaming competitors.

And the company is hoping video gaming will be another major positive factor in its effort to gain wider viewership.

We will have to see how well its gaming strategy works, but nevertheless, Netflix is a buy on any weakness down to the $660 to $670 area.