I’ve said this many times, but Warren Buffett is a personal hero of mine. His investing acumen is through the roof. He’s arguably the greatest investor of all time.

He’s racked up a 20% compound annual return going back decades. He built a $100 billion fortune – purely through investing. And that fortune would be at $200 billion if he didn’t already give away billions to charity.

Within his conglomerate, Berkshire Hathaway, he controls a common stock portfolio worth over $300 billion. And Buffett and his team recently added to one of their holdings in that portfolio.

Today, I want to tell you about the 4.6%-yielding dividend growth stock that Berkshire Hathaway just bought. Ready? Let’s dig in.

The stock that Berkshire Hathaway just added to is Chevron (CVX). 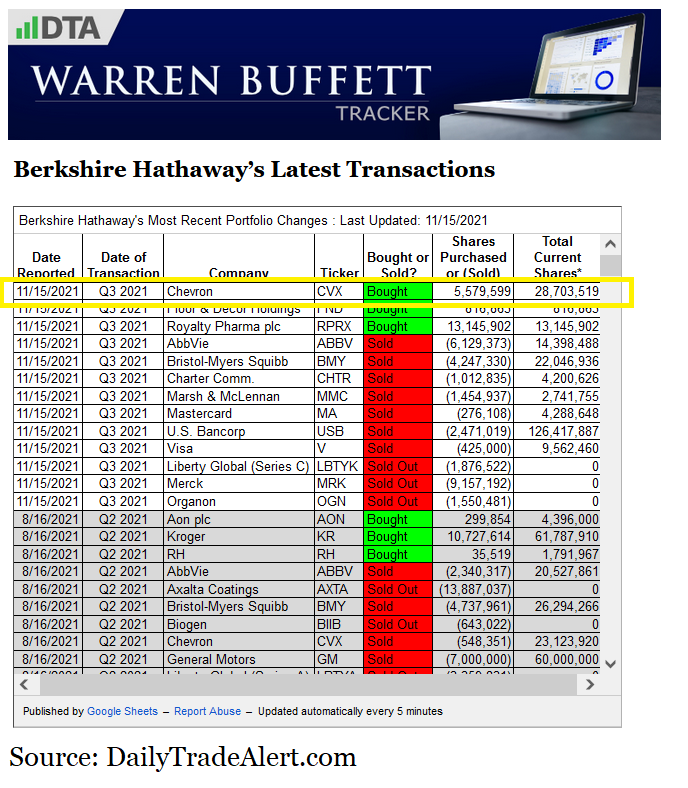 Chevron Corporation is a multinational energy company with a market cap of $225 billion.

Berkshire Hathaway scooped up more than 5.5 million shares in Q3. That 24.1% addition to their position brought the entire stake up to approximately 28.7 million shares worth more than $3.3 billion.

Let me point out one quick thing that’s a bit odd about this one.

Berkshire Hathaway initiated their position in Chevron in Q4 2020. They then sold off about half of it only one quarter later – in Q1 2021 – and followed up on that with another small reduction in Q2 2021. Here we are now, in Q3, and Berkshire Hathaway is doing an about-face and buying up the stock again.

It seems that Buffett is jumping back on the oil train. Choo-choo. All aboard!

WTI Crude is up about 60% this year. Chevron’s stock, which has some correlation to the price of oil, is up only 38% this year. Now, I’m not saying that Chevron will close that particular gap. It’s not really the right comparison. What I am saying is, Chevron has its fundamentals being supported by strong oil pricing.

We can see that show up in the company’s monster Q3 report.

Chevron’s third quarter was a thing of beauty. They beat the bottom-line consensus expectation by $3.8 billion, with revenue coming in 82.9% higher than a year ago. They also crushed the top line. Adjusted EPS increased by more than 15 times compared to Q3 2020. Yes. 15 times. 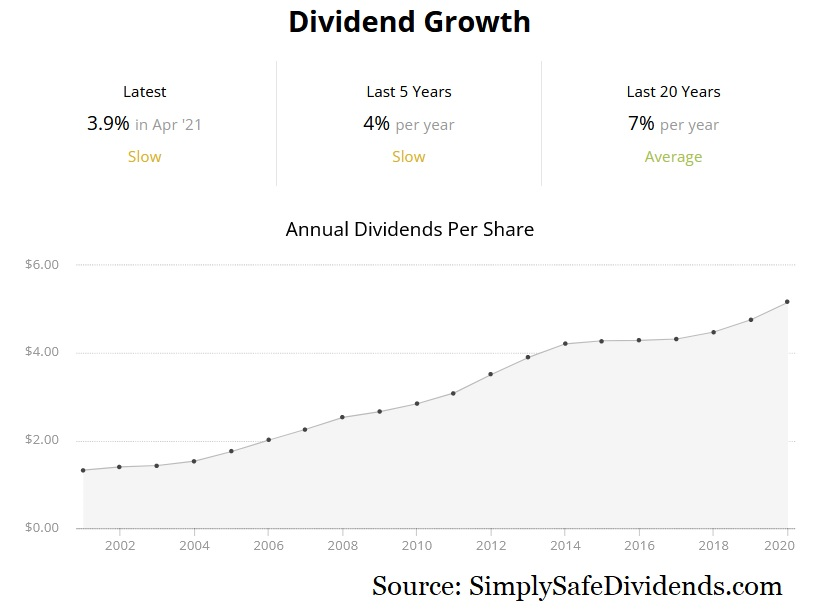 This Dividend Aristocrat has increased its dividend for 34 consecutive years. They didn’t cut the dividend during the pandemic, even when oil pricing went negative for the first time in history. That speaks volumes about the company’s commitment to the dividend. The 10-year dividend growth rate is 7.7%. Chevron increased the dividend by 3.9% earlier this year. And you know what they say – the safest dividend is the one that just got raised. While these growth rates are good, the yield is where Chevron really shines.

That’s a juicy dividend right there. That’s more than three times higher than what the S&P 500 yields. It’s also 30 basis points higher than the stock’s own five-year average yield. So while Chevron rakes in the cash, investors are able to lock in a yield that’s higher than usual. Buffett is known for his affinity for stocks that pay out big, growing dividends, so Chevron fits right in.

Buffett may not call himself a dividend growth investor, but he sure invests like one.

Many of the major long-term investments he’s made over his legendary career have been high-quality dividend growth stocks like the ones I consistently feature here at the channel and personally invest in. It’s very rare that Buffett buys a stock that doesn’t pay a growing dividend. With Chevron’s stock still not quite back to its pre-pandemic pricing, it’s not a surprise to see Berkshire Hathaway buying.

The stock is up 38% this year, but it’s not back to where it was before the pandemic hit. 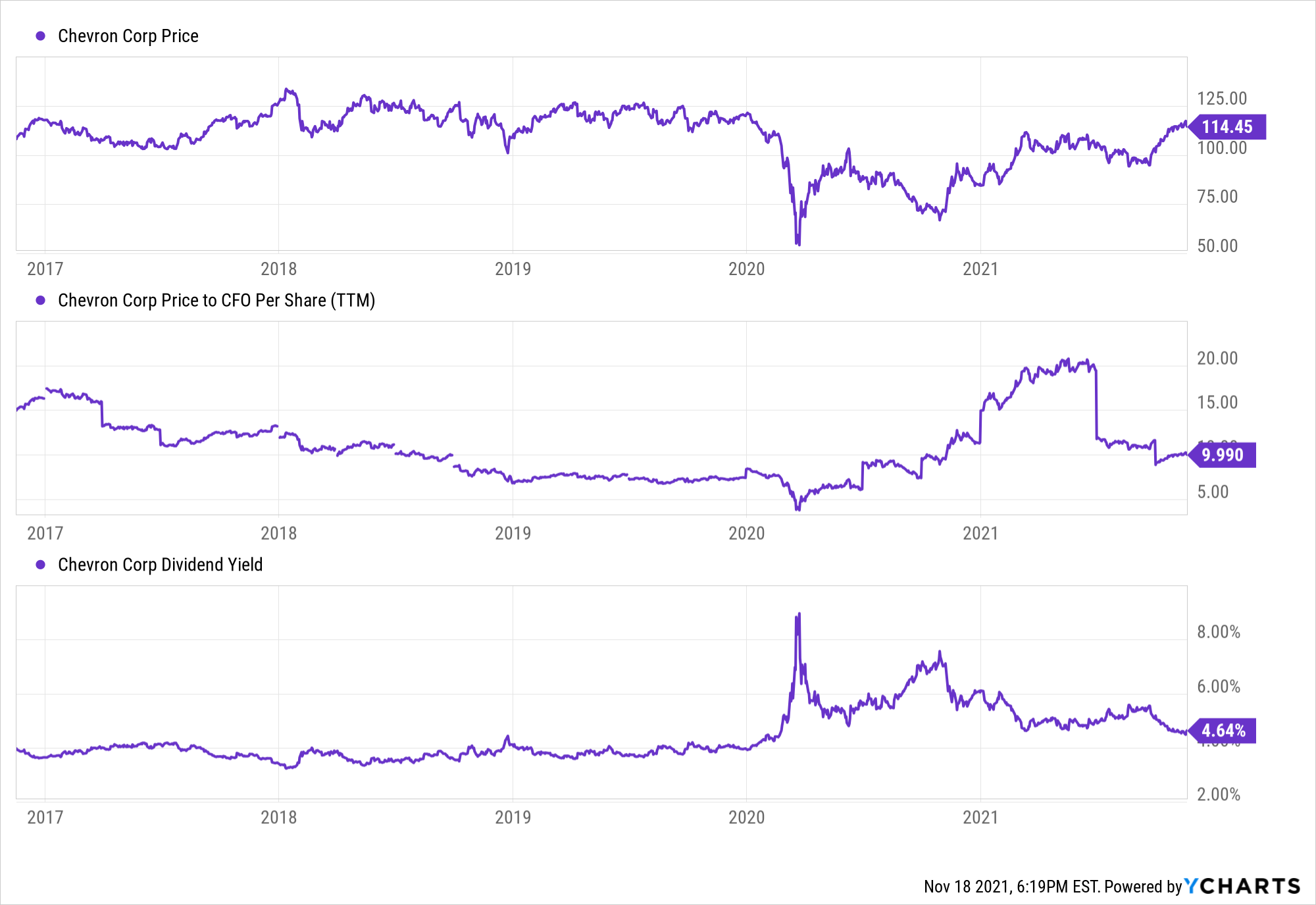 That’s right. This name was going for over $120/share in early 2020, right before things got a little crazy. The stock is now priced at less than $117/share. That’s despite WTI crude being significantly higher right now than it was in early 2020. Buffett is famous for his ability to spot a deal. Well, Berkshire Hathaway might be spotting something right here.

And I’ve got music for your ears.

Chevron CEO Mike Wirth, who is, in my opinion, one of the best CEOs out there, especially in Big Oil, has gone on the record to state that Chevron is changing its focus away from exploration and production and toward returning cash to shareholders through dividends and buybacks. Politics, institutional investors, and the flow of capital have combined to force his hand, which could work out perfectly for shareholders. Less supply meeting growing demand supports higher oil prices, all while Chevron returns much of its cash flow right back to shareholders.

Gone are the days of reckless spending on E&P. Instead, we get a cash cow that can be milked away.

Now, Chevron’s revenue and EPS are both down considerably compared to a decade ago. It’s been a rough stretch for Chevron and all major oil players. No doubt about it. This is a smaller Chevron. But it’s arguably also a more focused and disciplined Chevron than we’ve seen in the past. And that could bode very well for the business, the stock, and the dividend. I can’t speak for Buffett or Berkshire Hathaway, but they might be seeing the same thing I’m looking at here.

These comments by CEO Mike Wirth should catch your attention. 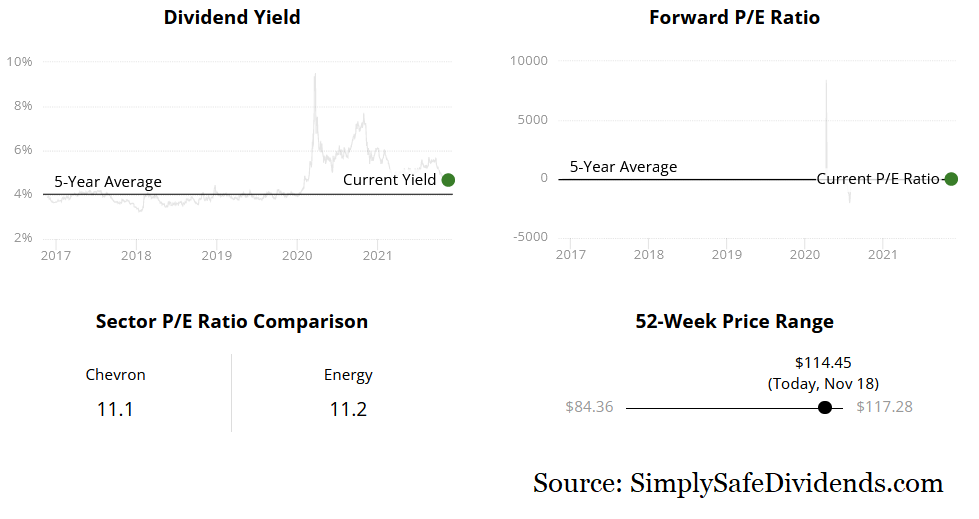 Admittedly, it’s a bit difficult to get a handle on the valuation. The company’s earnings have been extremely volatile over the last year. Things are still normalizing. But it’s difficult to ignore the favorable setup Chevron is now enjoying. The P/CF ratio of 10.2 is slightly lower than its five-year average of 10.8. And the yield, as I noted earlier, is higher than its own five-year average. With a leaner, meaner Chevron commanding a lower-than-average multiple and paying out a higher-than-average yield, that’s compelling.

Of course, Buffett isn’t the only one running the common stock portfolio for Berkshire Hathaway. He has two lieutenants helping him – Todd Combs, and Ted Weschler. Regardless of who actually pulled the trigger on Chevron stock, though, Buffett’s got the exposure to Chevron all the same through his ownership in Berkshire Hathaway.

If you haven’t already taken a look at Chevron, now might be a good time to do so.

The Dividend Aristocrat offers an undemanding valuation, a market-smashing 4.6% yield, more than 30 consecutive years of dividend raises, and favorable industry dynamics. The company is a leaner, meaner version of itself, dedicated to being a cash cow for its shareholders. Make sure to consider this long-term opportunity, if you haven’t already.