Roundhill Ball Metaverse ETF (META) has doubled its net asset value from $130 million to $260 million since Facebook (FB) changed its name to Meta Platforms two weeks ago. Volumes have also soared on the ETF. 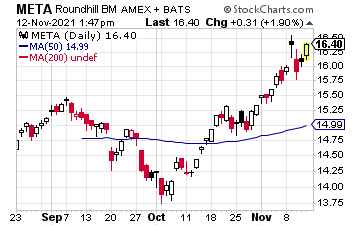 It may have been a serendipitous case of being in the right place at the right time for the Roundhill ETF. But what about for Facebook? Is this a smart move to shift its focus to the metaverse?

Out with Facebook…in with Meta Platforms. The tech giant announced the name change along with the new “metaverse” vision that founder and CEO Mark Zuckerberg laid out earlier this year.

The cynical among us may think this is just a PR ploy to distract from recent criticism of, and interrogation into, the social media company. But it is more than that: for investors, the rebrand marks a profound shift in the way Zuckerberg plans to generate revenues in the future.

That is in danger now, thanks to Apple (AAPL) introducing its App Tracking Transparency policy this year. This requires apps to ask its users for their permission before they gather their data to send personalized ads. Lots of people have taken advantage of this feature and opted out. 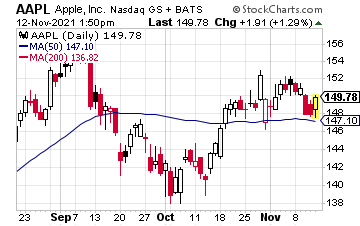 So, Facebook has plans to invest around $10 billion into Facebook Reality Labs. Its goal is “to build the future of connection within virtual and augmented reality.” In other words, it is the crucial component of Facebook’s intent to become a metaverse business.

Zuckerberg would like to see all sorts of activity, from work to leisure time to shopping to socializing, all happening on a Facebook platform.

Can Zuck Do It Again?

For this to happen, Facebook needs the hardware—namely, the Oculus Quest headset. The company is also working on a high-end headset codenamed “Project Cambria.” This second device will not be a replacement for Quest; instead, it will supposedly be packed with the most advanced technology to improve “social presence.” And, of course, it will be sold at a higher price point.

Zuckerberg is basically following the exact path of his previous very successful strategy. In its early years, Facebook actually declined some advertising revenue in order to attract as many users as possible. This generated the desired “network effect.”

But once it had the network effect—knowing that users, developers, and businesses were locked in—Facebook then switched from the “attract” mode to the “extract” mode, serving customers ads based on the wads of personal data the platform had accumulated.

However, the metaverse will likely not allow “extraction.” The whole idea behind the metaverse, to make it successful, is the “interoperability of data assets and content.”

This means that if a user puts up a “building” in Zuck’s Metaverse, the user—not the entity formerly known as Facebook—owns that digital asset. It can be easily moved to a different platform. This is not like how Facebook operates today, where it can license its users’ photos and data, trapping users on its platform.

I do not see Meta Platforms succeeding as much in this next stage of the internet as it did in the current stage. Instead, I will stick with my top pick, which I told you about a month ago.

Go With Roblox Instead

I believe Roblox (RBLX) is perfectly positioned to thrive in the metaverse.

Some think that Roblox is just a gaming company. They could not be more wrong—it is increasingly becoming a social media company as well.

Roblox’s management has said the ultimate goal is for the platform to become part of a series of interconnected digital worlds where people gather to learn, work and socialize. That is the metaverse.

Here is just one example of what Roblox is doing: chart-topping pop star Tai Verdes has teamed with Roblox to announce a first-of-its kind-virtual experience, which will premiere November 13 exclusively on the Roblox platform. Verdes, as his avatar self, will perform his just-released new single, “Let’s go to Hell,” in addition to several other popular songs, as part of the four-song concert set on Roblox.

From a brand engagement perspective, Roblox looks as though it could be more attractive than Facebook and others in the long run to advertisers. Companies can create their own interactive games and experiences on the platform, which are much more engaging to users.

For those of you that may have missed it, Roblox’s earnings results were out on November 8. The results were so good, it sent the stock soaring by 40%! The company doubled its total revenue in the third quarter and posted another solid quarter of bookings growth. Daily active users (DAUs) rose 9.5% sequentially to 47.3 million in the quarter, while October saw an average of 50.5-million DAUs.

Roblox is also continuing to make strides at narrowing its losses. In the third quarter, it posted a loss of only $0.13 per share, coming in much better than losses per share of $0.25 and $0.46 cents per share in Q2 and Q1, respectively.

Bookings growth also stayed strong, growing 28.5% year-on-year to $637.8 million. Also, October bookings are estimated to be up about 30% to 34% from October 2020. The strong October bookings point to a solid fourth quarter to cap off 2021.

Investors are finally taking notice of Roblox’s success. But there is a lot more to come. RBLX should continue to see upside, with the stock continuing to climb past all-time highs.