The “buy now, pay later” market has become popular for consumers who are strapped for cash, or want to make monthly payments, without the prolonged effect of compounding interest. One of the emerging leaders in this niche market is Affirm Holdings (AFRM).

Affirm Holdings made its stock debut in mid-January following its initial public offering.

AFRM priced its IPO at $49, with shares nearly doubling in its first day of trading. The stock hit an intraday high of $103 before closing at $96.36. The company has partnerships with nearly 6,500 retailers and is used by more than six million people.

AFRM makes its revenue from merchants when customers choose one of its lending options to finance purchases. The company has an interest-free 0% annual percentage rate (APR) offering, as well as a simple-interest loan product through which it also gets paid on the consumer end of a transaction.

During its most recent quarter, back in September, AFRM reported a loss of $0.48 per share on revenue just under $262 million. Forecasts were for a loss of $0.29 per shares on revenue of $226 million.

Despite the wider loss, six analysts upgraded their price targets on the stock, with most keeping a “buy” rating. The most aggressive call was from brokerage firm Truist, which raised its price target from $120 to $150, while keeping its “buy” rating on the shares.

Shares of AFRM have been in a strong uptrend since the earnings release. They have risen from $90 a share to a recent 52-week peak north of $160 and near-term resistance. Near-term support is at the $140 area, should shares fade from current levels and prior resistance from earlier this month.

AFRM’s relative strength index (RSI) is near 70—which typically indicates overbought levels—but it traded towards 80 in late August and early September. 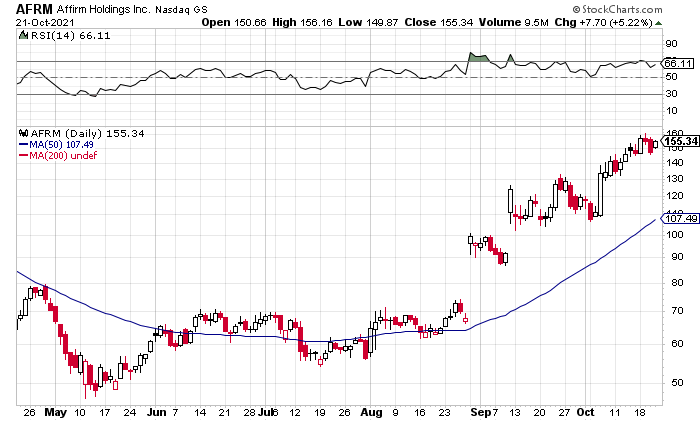 The recent pace of innovations are a good sign AFRM is on its way to becoming a key provider of financial services to the underbanked. That should allow the company to deliver high growth for years. However, it is important to note, that competition in this space remains heated, with Mastercard (MA) recently announcing that it is entering the buy now, pay later arena.

While there may be continued upside in the stock, especially if shares clear and hold $160, it appears AFRM shares remain expensive given the fact the company is expected to post losses into 2023.