The performance we’ve seen in Amazon (NASDAQ:AMZN) is not like what we have come to expect over the years. In fact, AMZN stock is the worst-performing FAANG component over the last 12 months and so far this year.

Amazon is up less than 1% so far in 2021. Despite the recent correction in the stock market, that notably lags the S&P 500 and Nasdaq, which are up 13% and 16% so far this year, respectively.

Apple (NASDAQ:AAPL) is up 6% on the year, and that’s the second-worst performing FAANG holding in 2021. The rest are up by double-digit percentages.

Not to get too performance-driven, but expanding the observation to the last 12 months only makes things worse. AMZN stock lost 4% in the last year. That’s versus the next-worst performing holding — Netflix (NASDAQ:NFLX) — which is up a much more impressive 16%.

So the question now is, can Amazon stock start to play catch up or are we going to see it continue to underperform?

In my opinion — and it is just that, an opinion — I believe patient bulls will eventually be rewarded by Amazon.

Why? Because this behemoth of a company still has solid growth and a great position in growing markets. Amazon thrives on a few different pillars, the main one of which is e-commerce. Beyond online sales we have Amazon Web Services, advertising and media (video, music, Twitch, etc.).

Together, these pillars should continue to propel Amazon forward, even as other platforms — like Shopify (NYSE:SHOP) and Etsy (NASDAQ:ETSY) — continue to thrive as well.

Case in point, just look at the growth.

Analysts expect 23% revenue growth this year and 18.3% growth next year. The following year currently calls for roughly 17% growth, although that may prove conservative. On the earnings front, consensus expectations call for roughly 26% growth in each of the next two years. That said, Amazon has crushed estimates over the last five quarters.

So there’s reason to believe that Amazon may generate above-consensus growth. Eventually this type of growth is rewarded, even if the stock price doesn’t react the way bulls think it should in the short term.

JPMorgan analysts recently reiterated their outperform rating and assigned a $4,100 price target. Part of the argument is, “The immediate focus on supply chain disruption and tough COVID comparable is said to have obscured what is an attractive entry point for long-term investors.” 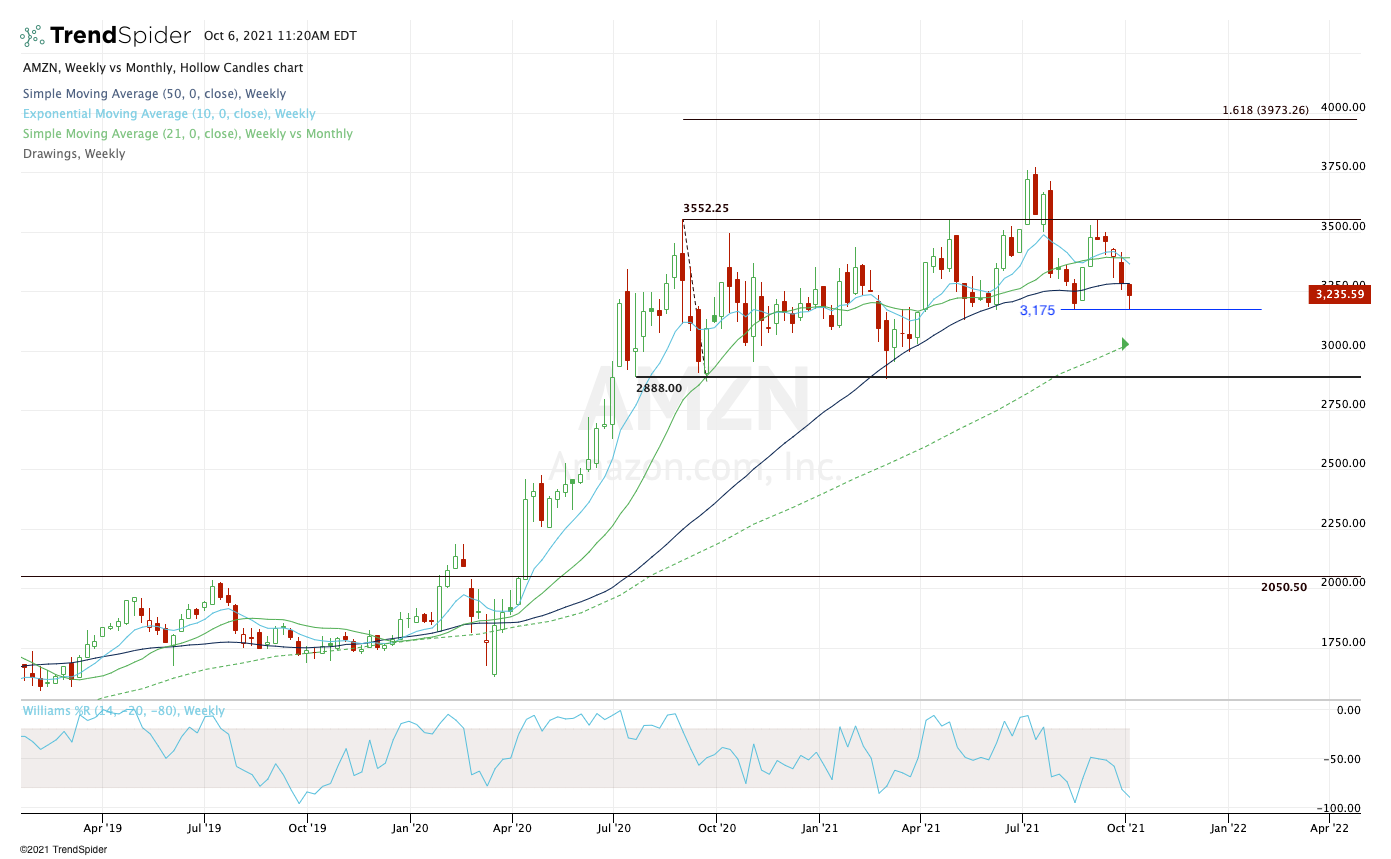 The way I look at the action in Amazon? Simply consolidation. Look at the massive move we saw from early 2020. Even from the pre-coronavirus highs, this stock has made a massive move. From the 2020 low, AMZN stock rallied in 16 out of 17 weeks, and in 21 out of 24 weeks.

So to spend a year or so consolidating those gains doesn’t seem outrageous to me. In fact, it seems somewhat normal. It also reminds me of Nvidia (NASDAQ:NVDA).

While Nvidia has been a relative strength leader — particularly after it split its stock price — it went through a period where the stock refused to rally despite strong results. Will it take a stock split to get Amazon going? It might.

For now, let’s see if the stock can stay above the 50-week moving average. That has been key support throughout 2021. Below this measure and the $3,175 level remains vulnerable. A break of this mark puts the 21-month moving average on the table, along with the $3,000 level. Below that and range support near $2,900 is likely in play.

However, the bottom line is simple: Amazon isn’t going away anytime soon — even without Jeff Bezos as CEO. As a result, there’s nothing wrong with continuing to hold this one until the eventual move higher.