If you’re looking for boring stocks, railroads have to land near the top of the list.

They’ve been a mainstay of the U.S. for well over a century. The business is certainly crucial. But it feels like a relic of the past.

Don’t let that fool you into thinking you can’t make money in these companies, though…

CSX (CSX) dates back to the 1800s. Its railways serve roughly two-thirds of Americans. You probably wouldn’t expect this stock to produce big gains… It’s not a high-flying tech opportunity.

But big outperformance is possible right now due to a specific setup.

History says this boring stock could lead to 25% gains over the next year. And that makes it worth a look right now.

CSX has fallen sharply since mid-August. It’s down 13% in a month and a half. But the recent drop has likely gone too far, too fast.

The stock is now in oversold territory. That means a reversal in the trend is likely soon.

When I say “oversold,” I’m referring to the relative strength index (“RSI”). This looks at recent movements in a stock to see if it has gone too far, too fast in either direction.

When a stock falls below and rises back above an RSI of 30, hitting oversold territory, a rally is likely to follow.

That’s exactly what we’re beginning to see with CSX. After peaking in August, the stock has fallen dramatically… hitting oversold territory earlier this month. Take a look… 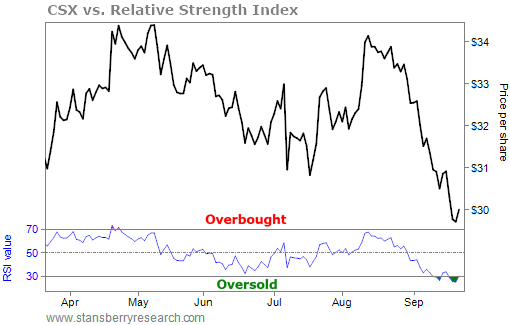 The stock fell below an RSI of 30 for the first time since January. This kind of setup has happened less than 1% of the time since 2000.

Furthermore, two decades of data show that you can expect outperformance thanks to this rare event. A 25% gain is possible over the next year. Check it out…

CSX might seem boring, but it has been a big performer since 2000… returning 14% per year. Today’s setup offers a chance to do even better though.

Buying after similar instances has led to 4% gains in three months, 11% gains in six months, and a 25% gain over the next year. That crushes a buy-and-hold strategy.

This might seem crazy for a boring railroad company. But most companies can lead to big gains if you buy them at the right time… And CSX is no exception.

Now, CSX is still in oversold territory. That means you’ll want to see it rise back above an RSI of 30 before buying. Once that happens, the stock will likely be off to the races.

Remember, history shows a 25% gain is possible over the next year. So this is a stock you want to keep a close eye on right now.