A common warning you’ll hear on Wall Street when a stock is in a major downtrend with no end in sight is not to “catch a falling knife.” This popular investing idiom is often used to describe a risky investment strategy, even if it applies to a bellwether stock.

The danger in trying to catch a falling knife is that the stock will continue to fall, causing you to lose money while hoping for a near-term or longer-term rebound. Lower lows can become increasingly frustrating as your initial investment bleeds more red ink.

One stock that has been showing no signs of bottoming is Bristol-Myers Squibb (BMY): shares have fallen 16 times in 18 sessions after peaking at $69.75. Shares have recently tested late April low near $61, with risk towards $60–$58 on continued weakness. 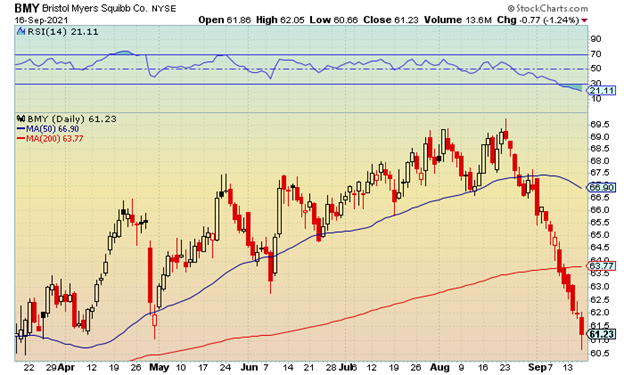 Some of the weakness may be due to a recent court ruling that came in late August that overturned Gilead’s (GILD) $1.2 billion patent loss to BMY. The court ruled that the patent held by Bristol Myers Squibb’s Juno Therapeutics and the Sloan Kettering Institute for Cancer Research was invalid, noting the patent was not supported by substantial evidence.

But there have also been some positive developments for BMY in recent months, following the approval for Abecma in late March. The drug is the first cell-based gene therapy approved by the U.S. Food and Drug Administration for the treatment of multiple myeloma.

The disease is an uncommon type of blood cancer that builds up abnormal plasma cells in the bone marrow that can then form tumors in several bones throughout the body. Abecma was also approved by the European Union, with analysts projecting peak sales to be above $2 billion.

BMY also has another blockbuster drug, Orencia, which is currently cleared for use with certain forms of arthritis after the FDA approved a supplemental biologics license application for the drug. The newly filed application is under priority review with a decision likely coming by the end of this year.

The chart above shows shares reached a previous bottom south of $58 in early March before rebounding to record a “double-top” near the $66.50 area in mid-April. However, by the end of that month, shares were down nearly 10% and pushing $61. The price action confirms shares can be streaky with the potential for double-digit gains or losses over a short period of time.

BMY’s dividend is now north of 3% with the relative strength index (RSI) signaling oversold conditions just above the 20 level.

Longer-term traders who might want to own the stock should consider half, or even quarter positions at current levels, to see if a near-term bottom will be reached. The current 52-week low is at $56.75.

Aggressive traders can initiate positions on the December 65 calls with the options currently trading near $1.20. If shares can hold the $60 level and make a rebound towards $67.50 by mid-December, these options would more than double from current levels as they would be $2.50 in the money. If shares fall below $57 and make new lows, the trade should be closed to save the remaining premium.