Shares of Hormel Foods (HRL) are down 15% from a 52-week and all-time high north of $52 and is a company that investors might want to consider at a discounted rate.

The canned-meat company has also transitioned its business model in recent years to include healthier snacking and food options by acquiring brands such as Justin’s Nut Butter, Applegate, Wholly Guacamole, and, more recently, Planters.

Kraft Heinz sold its nuts business to Hormel Foods for $3.35 billion in an all-cash deal that closed earlier this year. The transaction consisted of most products sold under the Planters brand such as nuts and their trail mix products, Cheez Balls and Cheez Curls, as well as Corn Nuts. Additionally, the deal included Kraft’s global intellectual property rights to the Planters brand.

On that note, HRL has done an amazing job of generating mid-teen revenue growth from products or brands that are less than five years old.

In its most recent earnings, the company reported a profit of $0.39 per share—matching Wall Street’s estimates—with revenue of $2.86 billion above consensus of $2.73 billion.

The company has a lengthy history of growing its dividend, with 55 consecutive years of payout growth. Shares currently offer an annual dividend of $0.98 for a current yield of 2.3%.

As far as the technical outlook, the stock has been in a downtrend since mid-August with current support at the $42 level. Resistance is at $43–$43.50 with a close above the latter likely signaling a near-term bottom. 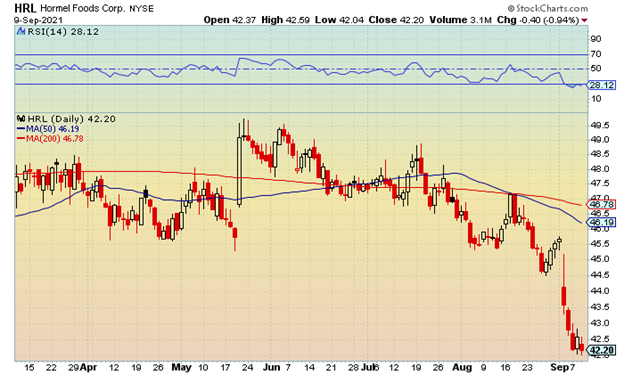 While there is risk towards the $40 area on continued weakness, RSI (relative strength index) is signaling oversold conditions with a reading below 30. In January of this year, and in September 2020, RSI was also at, or below 30, before rebounding to trade back towards 50 and even 70 on both occurrences within a month.

To offset continued weakness, conservative traders could also sell covered calls against the stock to lower the cost basis. For instance, the HRL January 42.50 calls are currently trading near $2 and would allow an investor to capture the next two dividend payments before possibly being called-away.

This would lower the cost basis to below $40 by selling the covered call and collecting the dividends. If shares are above $42.50 by mid-January, the position would still make over 5% over the next four months, as the options would be exercised.

If shares are below the $42.50 level, you could then sell another longer-term call option to further lower the cost basis and collect additional dividends.

For aggressive traders that do not wish to buy the stock and instead purchase the aforementioned call option, they would double from current levels if shares are above $46.50 as they would be $4 “in-the-money”. The breakeven point would be $44.50 with a loss of premium occurring on a close below $42.50.