Some investors love volatility — it’s like a drug or a slot machine. I wouldn’t consider buying Novavax (NASDAQ:NVAX) as the equivalent of going to the casino. However, NVAX stock is capable of making massive moves in a hurry and for those that can time the moves, it can pay off quite handsomely.

Trading is a difficult endeavor, but it’s a rewarding one for those that learn to play the game. The rush of dopamine traders can get is similar to other vices and as a result, it can lead down a dangerous path. However, those that can take out some of that emotion — as removing all emotion is almost impossible — they can really capitalize on the wide swings in the stock market.

Take NVAX stock for example. Shares rallied almost $200 or 150% in the span of a few days earlier this year. In less than a month, the stock then fell more than 55%, rallied 40% a few weeks later, then dropped more than 50% a few days after that.

I’m not trying to be overwhelming with the numbers, but the volatility here has been enormous. So when I say a “30% rally to new highs,” it’s not out of the realm of possibility with this stock. 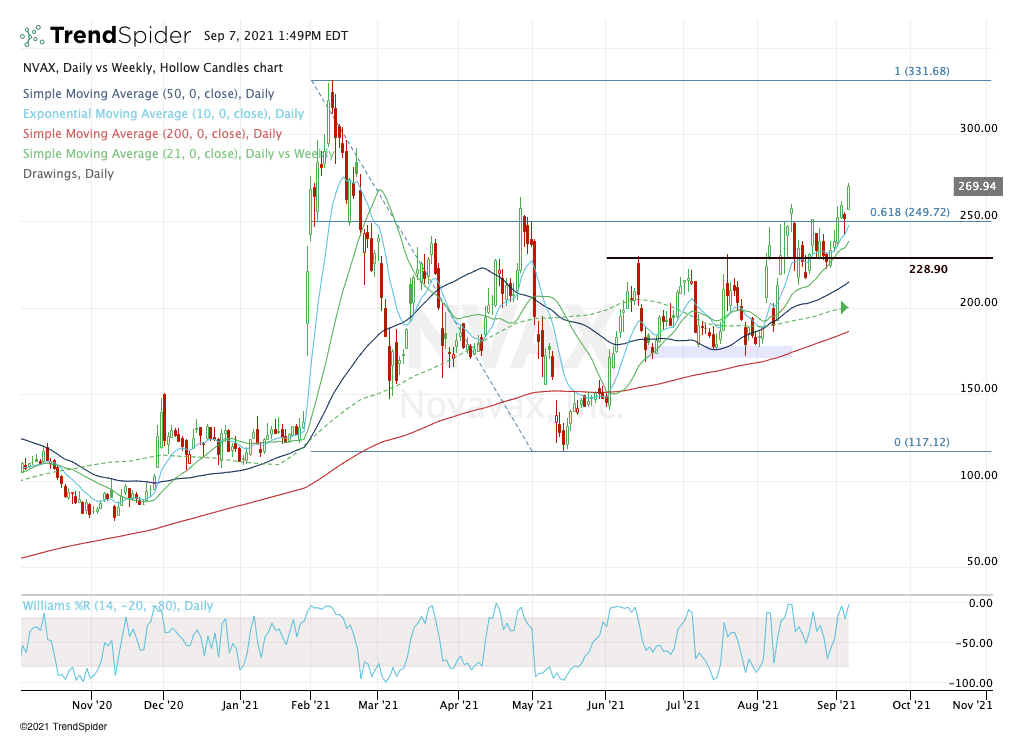 Take a look at the number of up-and-down moves we see here. There are dozens of 20%-plus moves littered all over this chart.

Novavax had been struggling with the $229 level, which continued to reject the stock. Once above this level, NVAX stock has mostly found it as support, along with the 21-day moving average.

Now shares are pushing even higher, clearing the 61.8% retracement and hitting its highest level since the first quarter. This is exactly the type of price action we were hoping to see in this stock.

From here, bulls need to see NVAX stock hold the $250 area. That’s a major level on the chart, as well as the 61.8% retracement. The longer it maintains above this mark, the better off it is.

On the upside, bulls will want to see if Novavax can get back to $300. If it can eventually close above this mark, it opens the door to the current high near $332. While this seems like an extreme move to the upside, realize it would be a gain of roughly 30% from the breakout mark.

As I’ve highlighted already, 20%, 25% and 30% moves seem like nothing to this stock. If we see that type of move now, new highs could be in store for the bulls.

On the flip side, A break back below $250 puts the 21-day moving average in play. If this key level measure fails to hold as support, it could put the $229 level back on the table, followed by the 50-day moving average.

Breaking Down Novavax
Many investors are going to look at the trailing numbers and scoff at its valuation. They’ll note the company’s current market capitalization of $20 billion vs. last year’s revenue of less than $500 million. Or they’ll point out that the stock still trades at just over 10 times this year’s estimate of $1.98 billion in sales.

The same skeptics will also argue that the company lost over $7 a share last year and is forecast to lose more than $10 per share this year!

How on earth can a stock climb another 30% on such fundamentals?

Looking forward is harder than looking backward, because what’s done in the past is already in the books. What’s coming in the future — be it one quarter or one year from now — takes a leap of faith. Consensus estimates are wrong all the time and so investors shouldn’t put all of their faith in them being accurate.

However, we can get a general idea of what 2022 should bring, so long as management can deliver.

Bottom Line
Current estimates call for earnings of more than $32 per share next year. That’s alongside an estimated $5.5 billion in sales. If that were to come to fruition, that sends Novavax from being unprofitable to trading at less than 10 times earnings — not sales. It goes from trading at 10 times revenue to roughly 3.6 times revenue.

With total debt of $430 million vs. more than $2 billion in cash and short-term investments, the balance sheet is in decent shape too.

Novavax may be a volatile high-flyer, but it’s got the growth prospects and the technicals to back it up. It’s okay to take a pass on Novavax in favor of others. At least for now though, there’s no reason to bet against NVAX stock.