A prominent saying on Wall Street says to not fight the tape. Another suggests to not fight the Fed. They both make sense, and they have concurrently been in full effect for at least three years as investors seek stocks to buy.

However in the coming months, the latter will get on the road to obsolescence. The Federal Reserve is on schedule to start tapering as early as this year.

Nevertheless, the equity indices are still at record levels going into tapering. Investors are still holding on to that advantage. The tape is still most definitely in the hands of the bulls. Therefore, it still makes sense to continue finding stocks to buy, especially when they fall out of favor.

The expert opinions are all over the map. Some believe that we are still far from a top. Others are prepping for a crash. I bet that somewhere in the middle is where stocks will remain for months. Circling back to the opening statement, it doesn’t make sense to change behavior without evidence. We should not fight the proverbial tape, and simply go with the flow.

In the middle of August the market stumbled a bit, and it was only down 3%. Immediately the buyers stepped in, found footing and broke new highs. This also happened a month earlier, and the month before that, and the month before that as well. In fact, every dip since the pandemic resulted in an immediate rebound then a breach into higher highs. Anticipating that this will change is wrong.

Investors should not call a top until one shows itself. Unless something breaks in the global systems, the top will be a process, not an event. It starts with at least two prominent failures at the same level. We haven’t had that happen. Then there will be breakouts that fail at establishing higher-highs. After all of that is when the price action may start to be descending. That would include lower-highs plus failures to hold support levels.

Until then, my assumption is to find stocks to buy on dips. Today, I specifically look for ones falling into their own support zones, and they are: 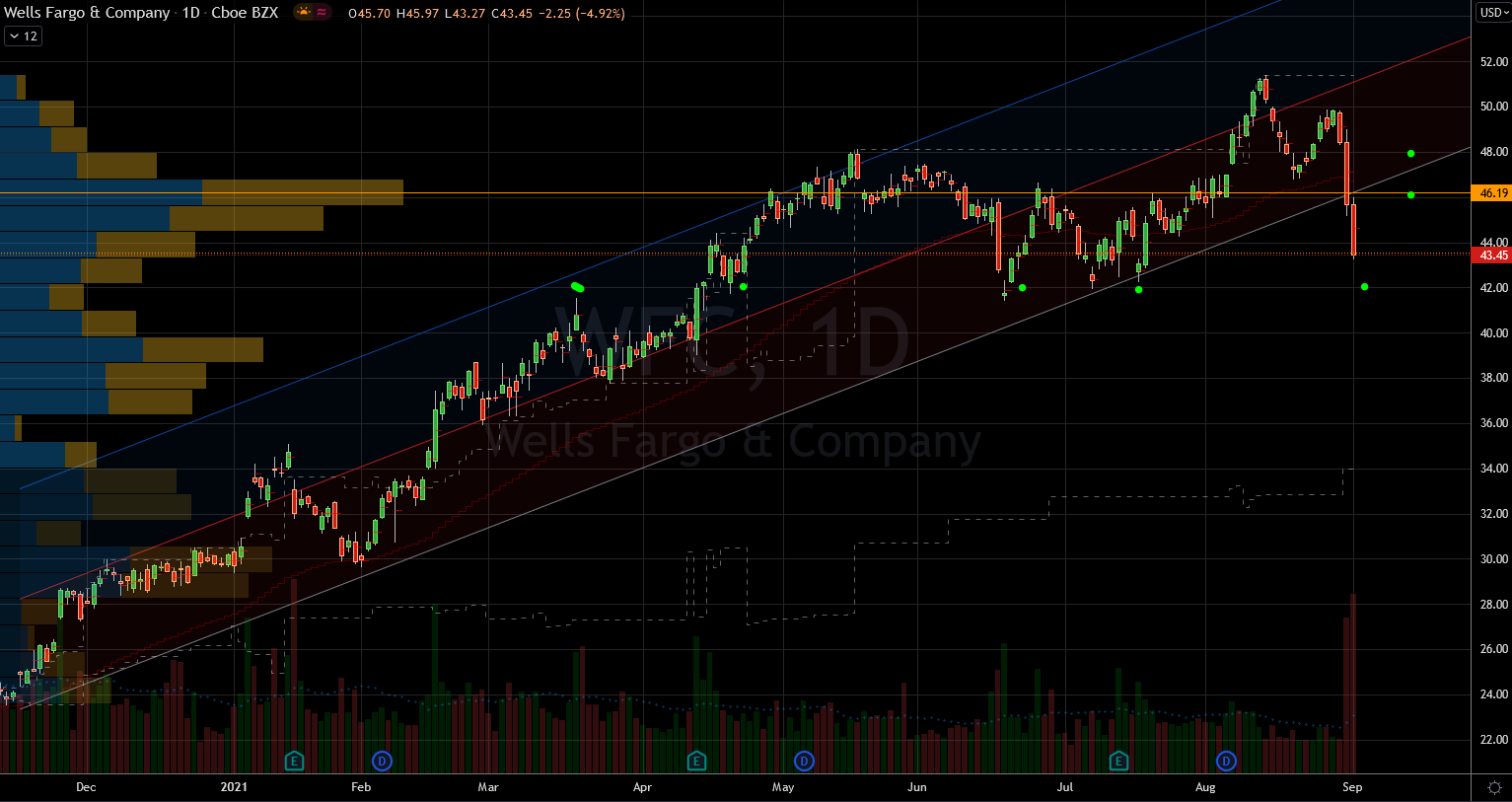 Bank stocks have been on a tear this year. They have most definitely shed the reputation that they couldn’t hold a rally long. Bank of America (NYSE:BAC), JPMorgan (NYSE:JPM) and Goldman Sachs (NYSE:GS) stocks are near highs. Conversely, Wells Fargo stock just fell 13% in just just days.

It has been the black sheep for a while. That is from the harm that they caused, so they have no one to blame but management. Five years ago they cheated their clients and they did not get away with it. The regulators stuck them with penalties and restrictions. This week, there are rumors that they are falling short on their promises for restitution. If so, the regulators could bring out the stick once more.

The old scab started bleeding again, so the stock is under pressure. Some of the best opportunities to find stocks to buy is on headline risk. In the heat of the moment, investors tend to panic and overreact. Cooler heads can do homework and take advantage of that.

WFC stock is as cheap as it’s been in a normal year in a while. Its price-to-book is 1.1, so there isn’t a lot of froth in the stock. Catching this falling knife as it approaches $41 per share makes sense. Technically, this was the base for the last 20% rally. Moreover, the bulls resolve is evident here with three separate bounces from it.

Furthermore, in March this was a level of resistance. Now it can become forward support. But if it fails then the trade is off and WFC stock could lose another 10%. The right thing to do is to take half a position and add later depending on the price action. Closer to $36 would be the place I’d do that, or after confirmation of current support holding.

The volume for the last two days has been significant, so the drop is legitimate. Big red candles like this demand respect. Going all in is reckless and shows overconfidence. When we don’t know what the regulators are going to do, we should be humble with our conviction. 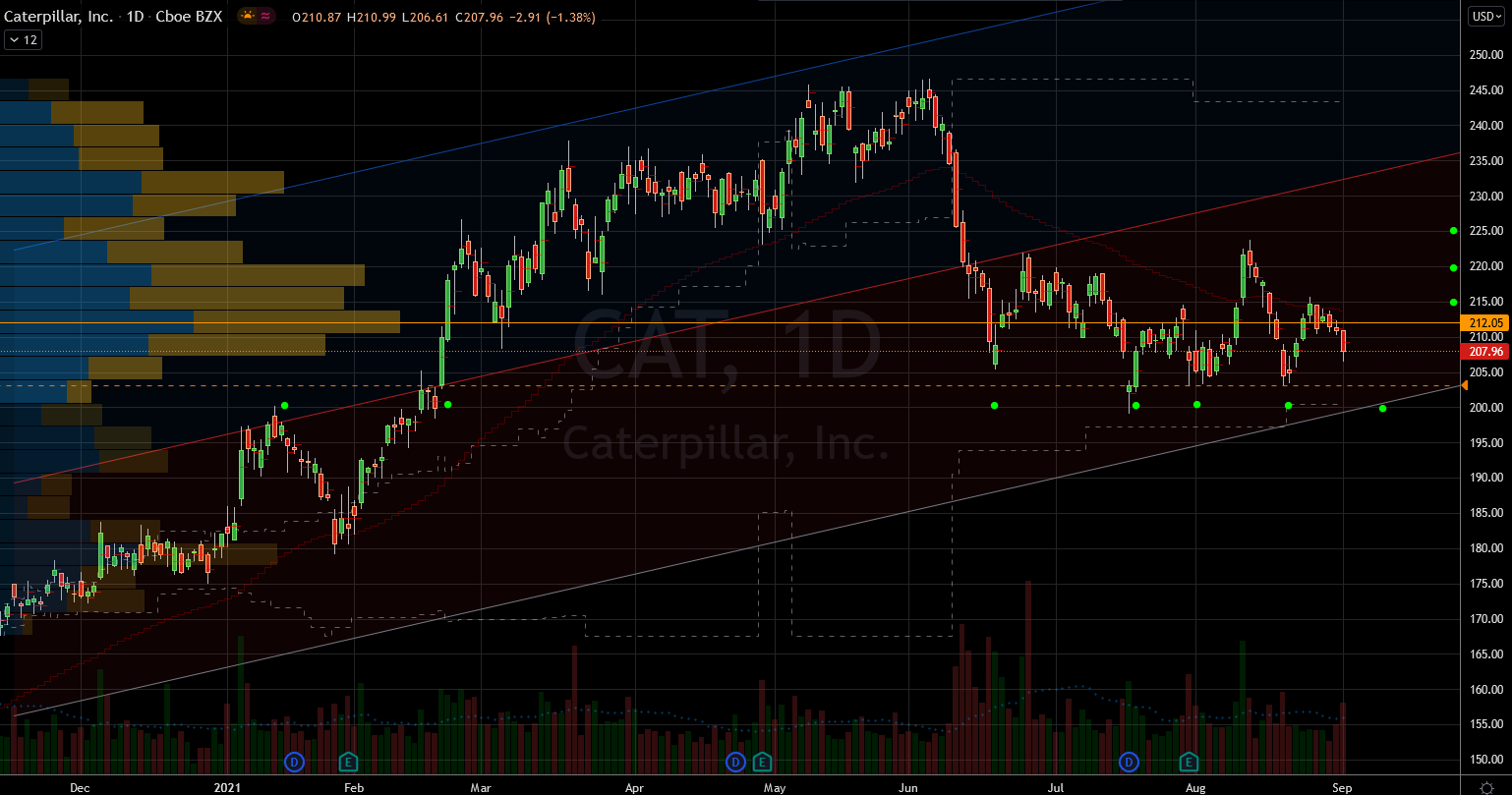 Our second pick today is good old Caterpillar. Cat stock has been around forever, so it has very little to prove. It has earned its credibility on Wall Street after decades of consistent performance. It was surprising to see it recover from the pandemic lows so strongly.

My assumption last year was that it could go back to what was normal before the global shutdown. CAT stock did that and then rallied another 66% on top of it. It has since given up almost 20%, so quite a bit of froth has already leaked out. This is a good thing because those who have missed the rally may brave an entry point.

The underlying assumption for this is that there will still be demand for growth. The U.S., for one, just passed a multi-trillion dollar infrastructure spending bill. Some of it is likely to land in the CAT P&L. Speaking of which, the financial metrics took a hit last year, but they held their own well enough. It is not dirt cheap with a P/E just under 30. However, it is still able to grow its cash generation from operations. Whatever management is doing is working to withstand the Covid-19 test.

There is technical risk to going all in here. Investors can be confident in the $200 support but not overly so. It has been pivotal all year long. But if it fails it would trigger a bearish outcome with a 10% potential drop from there. If that happens, it’d certainly catch it there. Try now with partial positions and add later. The potential bearish head and shoulder pattern is too scary to dive all in.

The rally from here won’t be easy. The bulls have to contend with the resistance starting at $215 per share. But with a solid floor below, they can get to work. 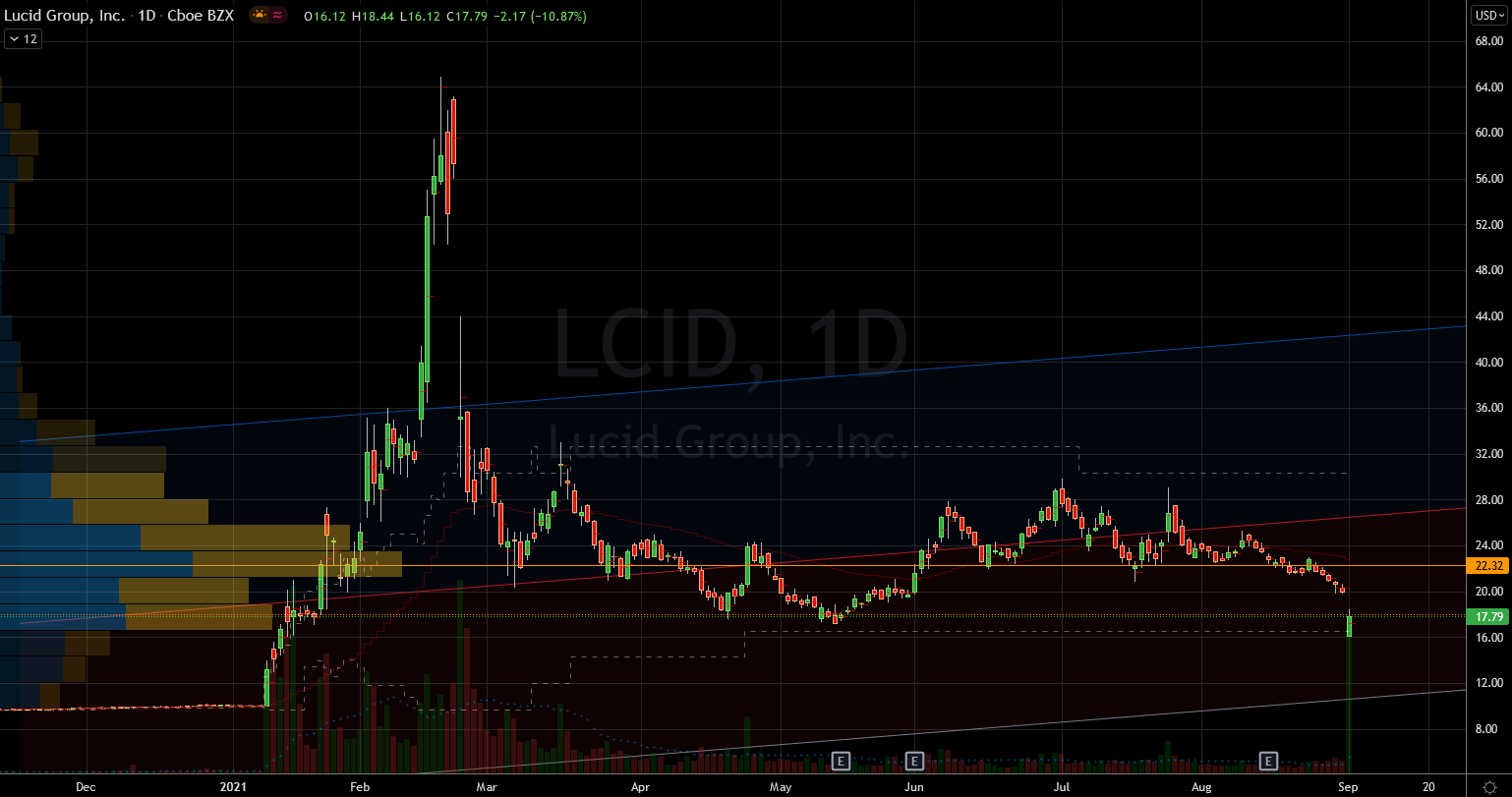 Those who know me will find my third pick today surprising. I have been more often than not a critic of LCID stock – especially on huge spikes. I’ve offered technical help through videos and the comment section are proof that the fans of the stock are fierce.

However, yesterday it fell apart but managed to close only down 11%. I say only because it was twice as bad early in the day. Those who felt like they missed it in past months can chase it with a starter position in now.

I have not changed my mind about investing in companies that don’t currently have an income stream. Lucid is still pre-production, which makes it by definition speculative. This is not an insult, but a statement of fact. It is a real company with real employees and an awesome looking car. Experts in the field speak highly of the technology in it.

On the other hand, it’s probably not going to hit the streets for years. Nevertheless, I believe that the LCID fans will step up to the plate and buy the dip. Therefore, I am placing it on the list of stocks to buy into the fall season.

Management needs to soon come out with exciting updates on production. Another reason why this is speculative is just that. They are just as likely to delay production one more time. Should this happen, it could very well cause another debacle in the stock. The reason I insist on the label of “speculative” is to suggest a small trade size.

It is more guessing than investing here, because the stock price has mostly hopes of future prospects not current sales. This is OK as long as the set up doesn’t get out of control. I would not add to or average down into dips, I’m either in or out. Not all stocks to buy on dips are similar. This one still needs to prove itself on Wall Street.