When retail traders all agree – and they all make the same bet – you want to run the other direction.

When these folks are all bullish, you should bet on a major decline. And the opposite is true as well. A swell of bearishness often occurs before a major rally.

That’s the opportunity today, in small-cap stocks. Retail traders are more bearish on small caps than they’ve been since 2019.

Despite this sector soaring for most of 2021, speculators have been getting out. They don’t trust the rally. And now, they are actively betting against small caps.

Following their lead in the past has been a terrible idea. And that means small caps continue to be positioned for a big rally.

Retail traders are more commonly known as speculators. At least, that’s the designation they get in the Commitment of Traders (“COT”) report.

This is a weekly report that gives us a look at what futures traders are doing with their money in real time. And it’s a great contrarian indicator at extremes.

You see, when futures traders are all betting in one direction, the opposite is likely to occur. And as we said, speculators are betting against small caps at a crazy level today. Take a look… 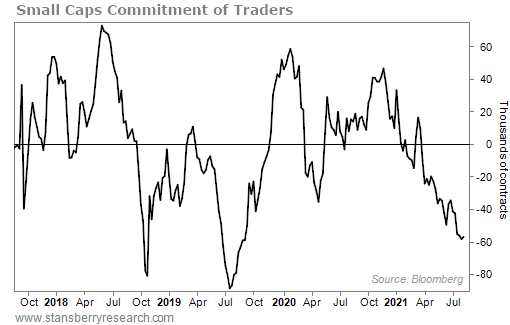 We’ve only seen two other times when traders were this bearish on small caps. The first example came in late 2018…

At the time, futures traders wanted nothing to do with small caps. Shortly after that, the sector took off. Small caps rallied 28% from late December to their peak in May 2019.

Not long after that big move, speculators turned bearish on the sector again. In July 2019, bearish bets hit another extreme…

But then, small caps jumped 15% from early August to their January 2020 peak. That’s another double-digit move following a bearish setup.

In short, speculators are turning bearish on small-cap stocks. But following their lead isn’t a good idea, based on history. We could see a double-digit rally in the coming months.

There are plenty of ways to bet against these speculators and own small-cap stocks. One of the simplest is the iShares Russell 2000 Fund (IWM). This fund tracks the Russell 2000 Index, the main small-cap benchmark.

That means that if retail investors are wrong again, IWM offers a simple way to profit. Based on history, that’s a bet you want to make today.