Amateur traders make this mistake all the time. And it’s one of the fastest ways to lose money in the market…

It has ruined more portfolios than almost any other mistake an investor can make. But that doesn’t have to be you. All you need to do is follow this one rule…

It’s extremely simple. But if you put it to use, it can save you a lifetime of investment misery.

No matter how good an investment is, don’t buy it if the crowd is already “all in.”

You see, the crowd is always late to the party. They miss the huge run-up in price and buy once the big gains are in the rearview mirror. That’s usually the best-case scenario for the herd. But it gets worse…

Once these traders are all in, that often signals a peak is on the horizon – and that a major downturn will follow. Let’s take a look at a recent example of this to see what I mean…

Coffee prices are up roughly 100% since bottoming in June 2020. That impressive run-up hasn’t gone unnoticed, though.

After its huge move higher, traders poured into the commodity. We can see this through the weekly Commitment of Traders (“COT”) report for coffee.

The COT report gives us an inside look at what futures traders are betting on in real time.

Under normal circumstances, this indicator doesn’t tell us much. But when futures traders are all betting in one direction, it can be a great contrarian tool. That means when these traders all agree, you want to make the opposite bet.

Today, these speculators are all betting that coffee prices will continue to soar. Take a look… 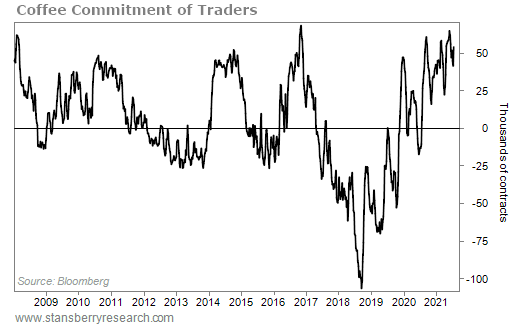 Today’s sentiment is near record highs. And similar cases have happened just a handful of times in the last two decades.

Speculators were dead wrong in all of these cases – coffee prices tanked shortly after these previous extremes. The first example of this was in 2008 when the commodity fell about 30%.

The 2014 example had a similar result. After speculators piled in on the trade near the top, the bottom fell out… and the commodity dropped 51%.

These traders never seem to learn from their mistakes, which cost them again in 2016… Speculators placed record bullish bets that November. And again, coffee prices tanked, falling 40%.

This is just one example of amateur traders going all in at the worst time. But the rule applies to nearly every asset you can invest in.

Once the crowd is all in, that makes it a trade to avoid… regardless of how good you think the investment is.