Why do I care what Bruce Flatt thinks about commercial real estate?

The answer lies in the chart below, which depicts the market-smashing performance of Brookfield under Flatt’s leadership. 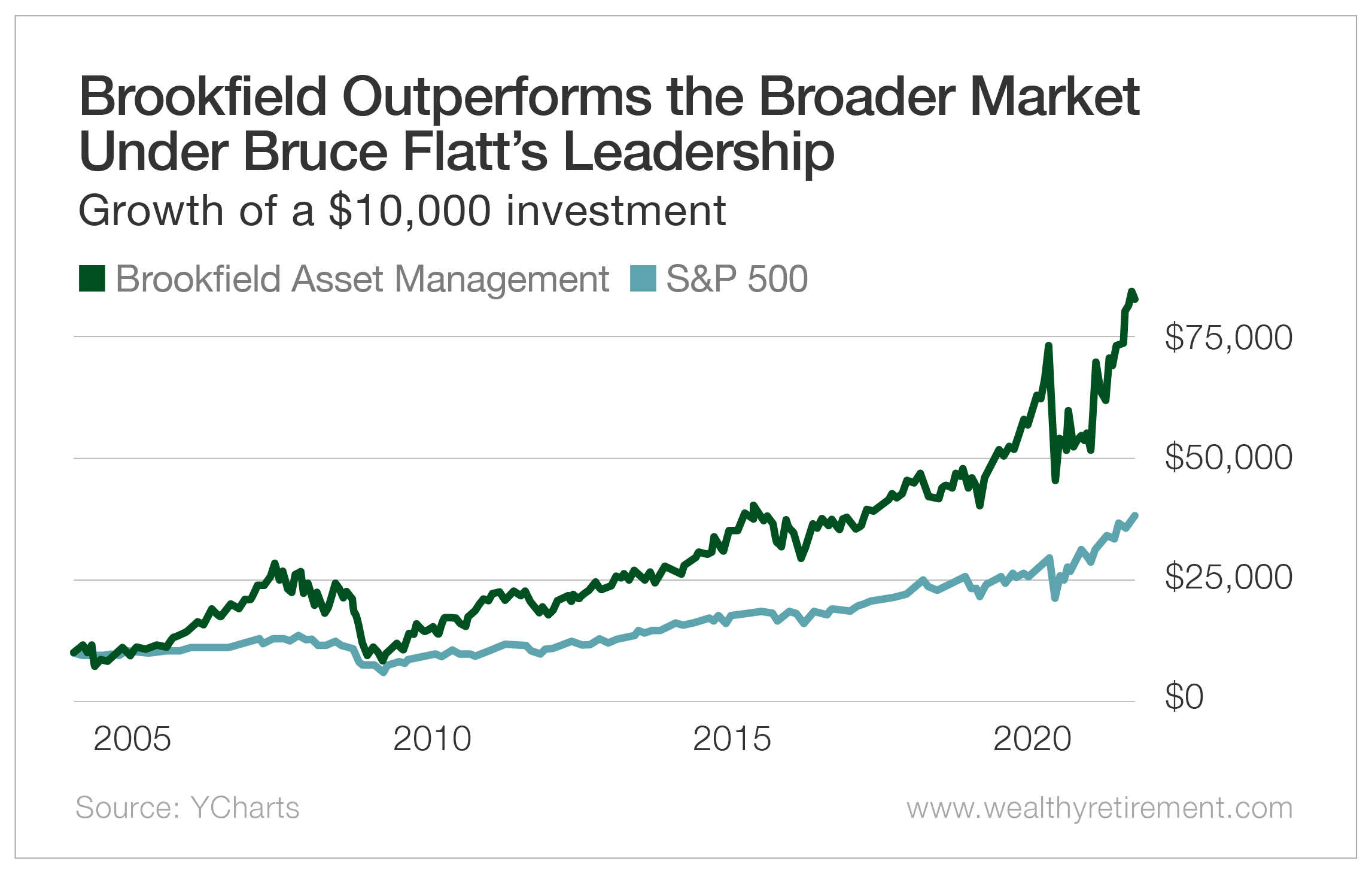 Brookfield is one of the world’s largest commercial real estate investors – and much of this beautiful chart can be attributed to Flatt and his team’s skill.

And it’s currently trading for $0.50 on the dollar.

The most recent tax-assessed value of the arena was $1.2 billion.

Wall Street analysts think the value is actually higher, with estimates ranging from $1.3 billion to $2 billion. And in 2013, $1 billion was spent renovating and upgrading Madison Square Garden, which provides another valuation data point.

To be conservative, I’ll assume the tax-assessed $1.2 billion figure is correct.

Against that $1.2 billion valuation of the arena alone, let’s have a look at how the entire company is valued in the stock market… 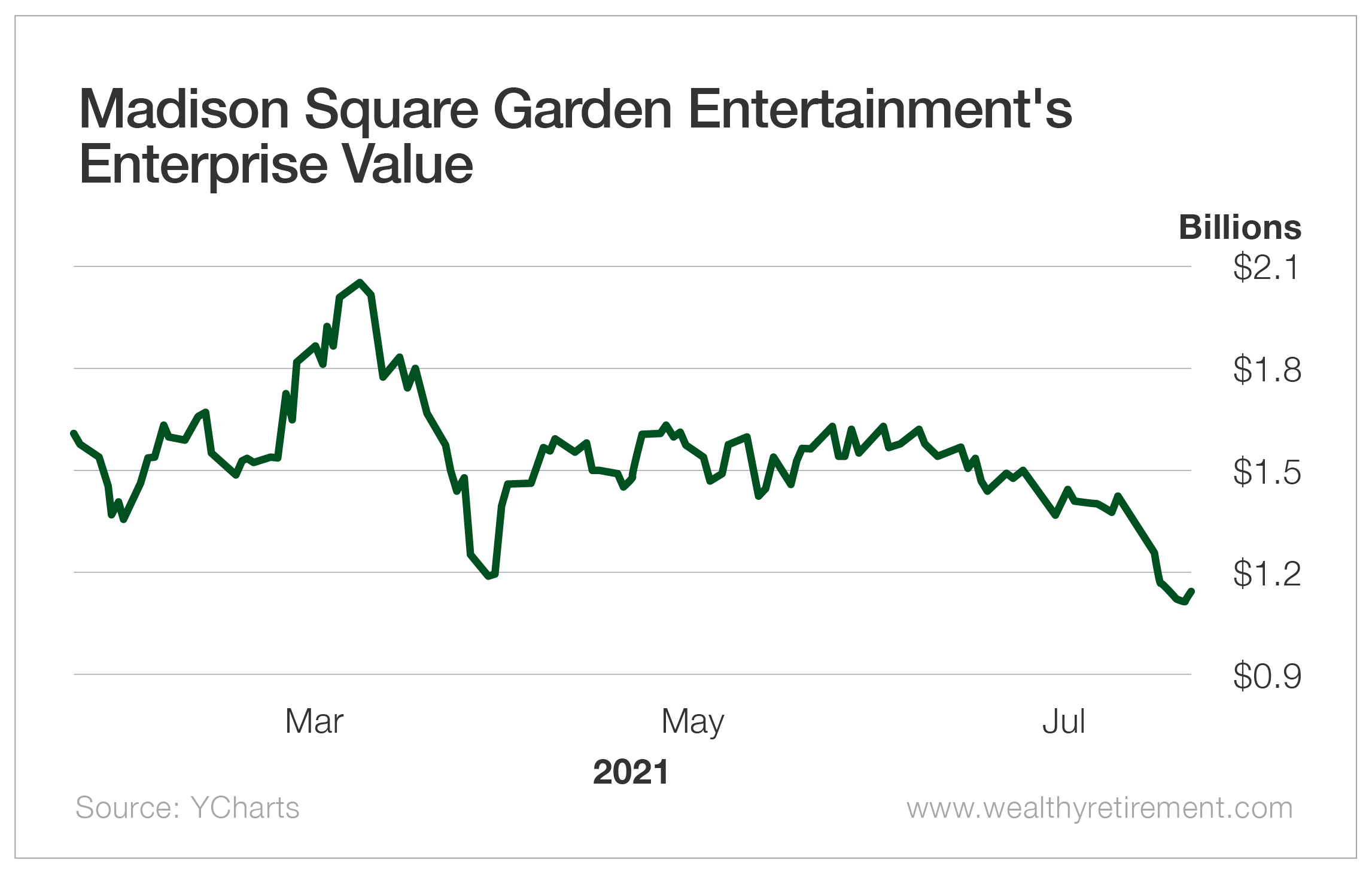 With a recent decline in its share price, the entire company is now valued at just more than $1.1 billion – slightly less than what the Madison Square Garden arena is likely worth.

Pay a Fair Price for the Arena, Get Everything Else for Free

The arena is lodged in the company’s entertainment unit, which includes management of several world-renowned venues.

In addition to Madison Square Garden, the entertainment unit houses Radio City Music Hall, The Chicago Theatre, the Beacon Theatre, the Hulu Theatre and the MSG Sphere in Las Vegas, which is currently under construction.

The MSG Sphere is going to be an incredible property.

When completed in 2023, it will be a mind-blowing 17,000-seat venue that uses cutting-edge visual and audio technologies to create a futuristic experience and will host some of the biggest acts in music. 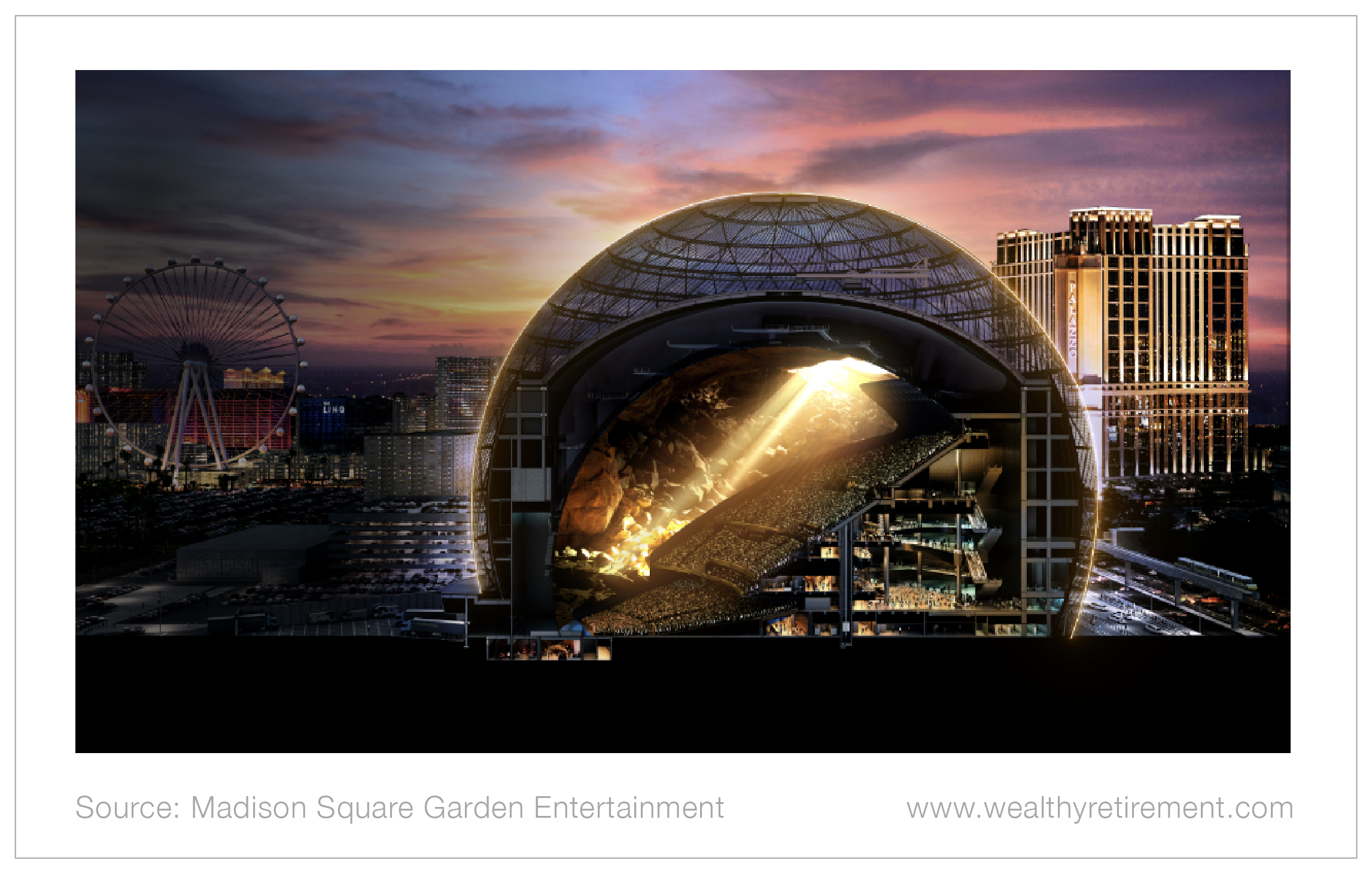 It will be an iconic Las Vegas landmark.

Madison Square Garden Entertainment has already invested $700 million into the MSG Sphere, and at completion, the venue will have cost $1.1 billion to build.

The company’s other business unit is Tao Group Hospitality, which operates 28 entertainment dining and nightlife venues.

In addition to these two operating business units, Madison Square Garden Entertainment has a balance sheet that is loaded with cash – currently $1.27 billion against $650 million of total debt.

That gives it a $600 million-plus net cash position.

If I take the $1.2 billion value of the arena, plus the $700 million invested in the MSG Sphere, plus the $600 million of net cash on the company’s balance sheet, I arrive at assets worth $2.5 billion.

That is already double the $1.1 billion valuation that Madison Square Garden Entertainment’s stock trades at, and I didn’t factor in any value for the other properties the company owns or for Tao Hospitality Group.

That means its stock is currently trading at $0.50 on the dollar.

The company just announced the completion of the acquisition of MSG Networks.

MSG Networks operates the top two networks (MSG Network and MSG+) in the No. 1 media market in the United States.

MSG Networks is an excellent business. In 2020, it generated free cash flow of more than $200 million.

The price that Madison Square Garden Entertainment paid for this business is an absolute steal.

Those are dirt-cheap multiples for a high-quality business.

For perspective, consider that the broadcast home of the New York Yankees, the YES Network, was recently sold at 8.5 times operating income.

And that much higher multiple represented a forced sale that The Walt Disney Company (NYSE: DIS) had to do in order to merge with Fox.

While this low purchase price was bad news for MSG Networks shareholders, it was a coup for Madison Square Garden Entertainment.