Jaw-dropping valuations are a classic hallmark of a Melt Up.

They’re all but certain in an environment like today’s. When investors get excited about stocks, they bid up prices to incredible heights. The focus is all about the future… And the opportunities seem so big that no one worries about valuations.

Today, it’s happening in a sector that was at the heart of the 1990s Melt Up.

You see, the information technology sector is getting darn expensive based on one metric. In fact, it’s the most expensive it has been on record.

This is a clear sign of the current Melt Up that’s underway. But it doesn’t mean the fun has to stop today. Instead, it tells us that we’re in the final inning of today’s boom… And that means that you can still take advantage of it right now.

There are plenty of ways to value a group of stocks. But for the high-growth tech sector, where companies often take years to start making earnings, there’s clearly a best tool.

That’s the price-to-sales (P/S) ratio. It’s one of the simplest valuation measures. It tells you how much you’re paying for an asset based on a company’s total revenue.

A P/S ratio of 1 means you’re paying $1 for every $1 of company sales. A ratio of less than 1 is cheap. And the higher this ratio goes above 1, the more expensive an asset is.

Again, tech stocks tend to focus more on growth and less on earnings. So looking at sales is a simple way to value the sector.

During a Melt Up, assets tend to trade at sky-high prices. And that’s exactly what we are seeing in the information technology sector right now…

The sector hit a P/S ratio of 7.5 last week. That’s the highest on record. Take a look… 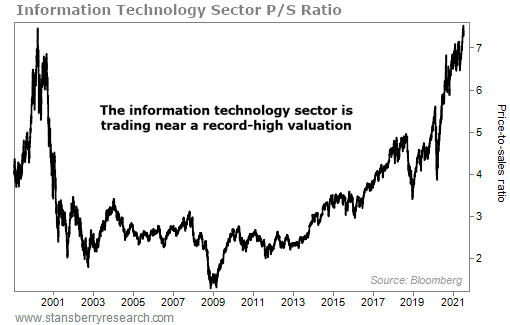 The average P/S ratio since 1998 is 3.4. Today, we’re seeing valuations for this sector that are double the average.

Now, this might spook you if you own information technology stocks. And it might make you think that the Melt Up must be nearing its end. But valuations alone aren’t enough to justify selling.

In fact, during the last Melt Up, this tech sector traded above a P/S ratio of 6 as early as December 1999… months before technology stocks fell in March 2000. And the sector was expensive years before that.

My point is, valuations were high… but the sector kept climbing higher. And selling simply because of high valuations would have cost you a lot of profits.

In short, we’re seeing this Melt Up play out just as we’d expect. The window of opportunity is closing. But today’s high valuations are only a sign that we’re in the final inning of today’s Melt Up… not a sell signal on their own.