We can see this through the STOXX Europe 600 Index. This index holds a basket of large-, mid-, and small-cap stocks all over Europe. And that makes it a good gauge for Europe’s overall market.

Today, this index is breaking out. It recently rallied nine days in a row. We haven’t seen a breakout like that since late 2017.

This is great news for investors as well. We could see strong outperformance in European stocks over the next year.

You’ll rarely get hurt sticking with the trend in your investments. Markets that are going up tend to keep going up. It’s really that simple.

That’s why a string of consecutive up-days can be so powerful. It signals a breakout is taking place…

Folks often think of a breakout as a sign to be cautious. After all, if the stock has already soared, they figure they must have missed the opportunity.

But these breakouts actually tend to highlight the start of another move higher. And that can mean an acceleration in the trend.

European stocks recently came off a rally of nine up days in a row. Take a look… 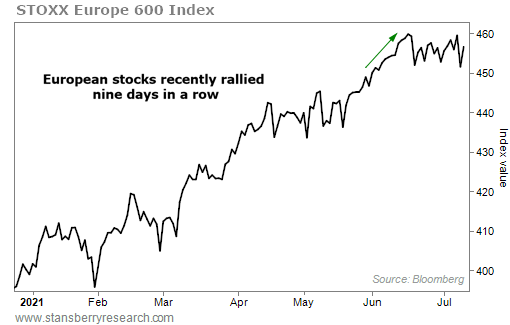 Since 1991, these up-day setups have been a good sign for investors. For three decades, they’ve led to gains 80% of the time over the next year.

Even more, history shows this kind of outperformance is likely now. Check it out…

Europe’s market has done OK since 1991… returning 5% in a typical year. But thanks to today’s setup, you have a chance to do much better than that…

Similar cases have led to 2% gains in three months, 6% gains in six months, and a 9% gain in the next year. That’s much better than if you’d bought in 1991 and simply held the entire time.

The fund doesn’t track the STOXX 60 Europe Index, but it holds a basket of European companies. And it’s a darn good proxy and easy to purchase.

I realize that most folks don’t want to invest outside the U.S. But that’s often a mistake.

You never want to let a good opportunity pass you by as an investor. And today, that means it’s time to consider investing in Europe.