Just over a year ago, I examined the dividend safety of Arbor Realty Trust (NYSE: ABR). You’ll recall that in June of 2020, the pandemic was starting to get bad and there was a lot of uncertainty in the economy and financial markets.

Shares of the Long Island, New York-based mortgage real estate investment trust (REIT) had been hit hard, and the stock yielded 13.6% at the time. I wrote that while the payout ratio was too high in 2019, everything else looked good for the company and the dividend was pretty safe.

The stock has rebounded since then to the point where the yield is nearly half of what it was last year. But it’s not because of a dividend cut – in fact, the company has been raising the dividend consistently. The yield has dropped because the stock price nearly doubled.

Last year, when I wrote about Arbor Realty Trust, net interest income – which is the difference between what a mortgage REIT earns for lending out its cash and what it pays to borrow the capital that it lends – was forecast to be $140 million.

It did much better, generating $170 million.

This year, that figure is forecast to climb to $220.7 million. At the same time, Arbor Realty Trust is projected to pay shareholders $196.3 million in dividends, significantly more than the $138.8 million it paid last year.

Arbor Realty Trust began paying a dividend in 2004. When the financial crisis hit, the company halted its dividend for three years. The elimination of that dividend has aged out of the SafetyNet Pro model, as dividend cuts from more than 10 years ago are not factored into the rating system.

Since the dividend was reinstated in 2012, Arbor Realty Trust has done a good job of raising the dividend every year, and sometimes more than once per year. It has increased its dividend by a penny per share for the past four quarters in a row and most recently paid $0.34 per share last month. 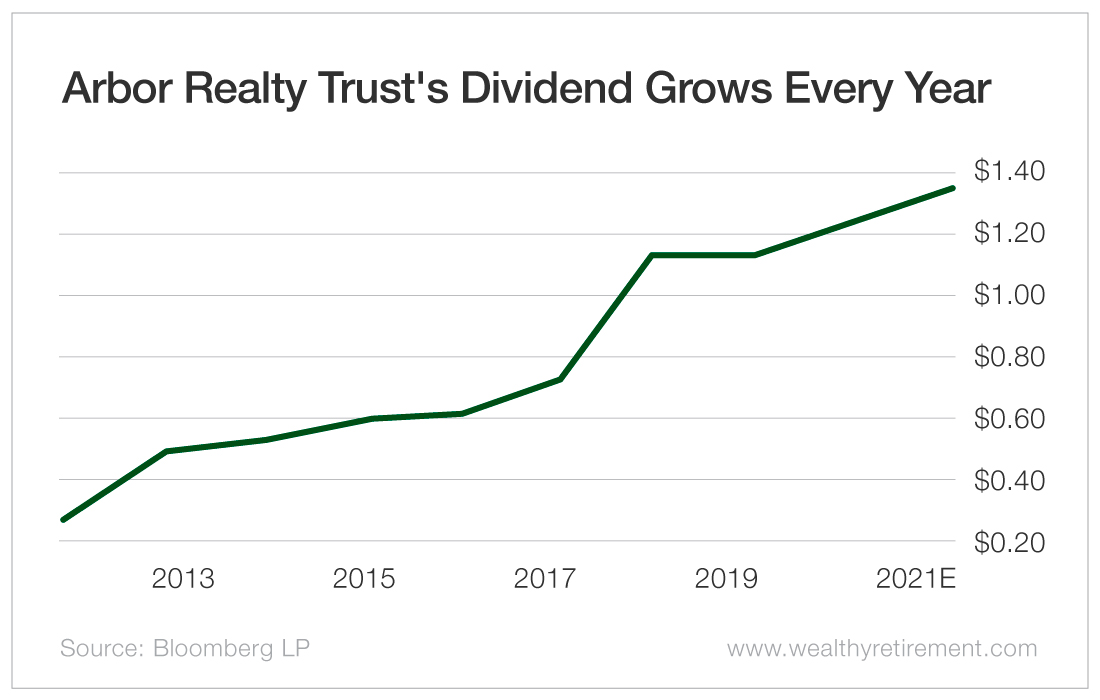 Arbor Realty Trust has been able to increase the dividend annually since 2013 because it has grown its net interest income every year since 2012.

If Arbor Realty Trust can continue this impressive streak, there’s no reason the dividend won’t rise each year as well.

Last year, I said that despite the chaos at the moment, Arbor Realty Trust’s dividend “should be fairly safe.” This year, the dividend is even safer.