Tesla Inc. (NASDAQ: TSLA) is likely to report that it delivered 200,000 vehicles in the second quarter of 2021. That “headline” alone makes it pretty clear the electric vehicle (EV) segment is one of the hottest there is now.

That said, the EV segment is a fairly crowded space right now. There’s a big “flash in the pan” factor, and a lot of junk to avoid, but there are plenty of must-own stocks here. We’ve talked about a few of those companies here before, and I’ve recommended some trades on those stocks for my subscribers.

Today, as oil is spiking to seven-year highs, I’m going to name another company I think every investor needs to own right now.

The thing is, most investors – and, while I’m at it, plenty of analysts – don’t really think of this firm as much of an EV player.

But it definitely is – and it’s set up to become an even bigger force in the related EV battery space. It’s made impressive investments and forged important strategic partnerships that virtually guarantee it.

Detroit 2.0 Is Powering Up

In March 2020, before the coronavirus pandemic exploded, General Motors Inc. (NYSE: GM) laid out a vision of the world with “zero crashes, zero emissions, and zero congestion,” as it announced it was plowing around $20 billion into expanding its electric and autonomous vehicle (AV) capacity through 2025.

When the company announced it was increasing its first- and second-quarter guidance, Barra publicly boosted that earlier commitment by 75%, to $35 billion. Barra and the boardroom credit a “strong underlying business, including record EBIT-adjusted (earnings before interest and taxes) in the last three quarters” for the extra investment firepower. That’s even more impressive when you consider the ongoing global semiconductor shortage.

This is an aggressive move, for sure, and I love what I’m seeing and hearing from this company.

CEO Barra says GM is targeting 1 million EV sales annually by 2025, which is really aggressive when you remember that GM sold just over 202,400 EVs a year as recently as 2020. In the EV segment as a whole, sales didn’t really top 1 million until 2018.

A million electric vehicles would be fantastic, but it’s clear GM’s got even bigger ambitions, long-term – Barra is aiming for GM to become a leader in the related EV battery segment.

To hit this goal, GM is moving forward with its plans to build two new “Ultium” battery cell plants in the United States to compliment two more Ultium cell factories in Ohio and Tennessee.

GM plans to “commercialize” (that is, “sell”) its Ultium batteries and “Hydrotec” hydrogen fuel cells; it’s supplying Ultium batteries to Honda Motor Co. Ltd. (NYSE: HMC) for use in upcoming Honda and Acura EVs, and GM is planning to sell Hydrotec fuel cells to Wabtec Corp. as it develops the world’s first battery-powered locomotive. The company is also making deals to supply Hydrotec cells to Navistar Inc. and Liebherr-Aerospace for electric trucks and aircraft.

This five-year, $35 billion investment – which is downright modest considering its $30 billion in cash and equivalents on hand – comes at just the right time. If anything, GM could be investing even more, and it might yet. I think every penny GM spends on dominating the battery space is money well spent, and I don’t think folks who own GM for its $0.38 dividend have much to worry about there, either.

GM just announced another extremely important strategic partnership to cement its place as a top-tier EV and battery player.

Just this past Friday, before the long holiday weekend, GM announced it was partnering up with Controlled Thermal Resources Ltd. to secure an absolutely critical natural resource in the battery game – lithium.

Interestingly, there is plenty of lithium in deposits all over the world, but comparatively little of it is being extracted right now; it’s only processed in a handful of places on Earth.

The few American EV and battery companies out there currently have to source most of their lithium from Australia, South America, and China. Given tensions with China and ongoing, global supply shortages of everything from semiconductors to IKEA furniture to ketchup packets, this just won’t work in the long run.

GM and Controlled Thermal Resources are aiming to exploit domestic lithium supplies in California to meet GM’s aggressive growth goals. GM and CTR think they can clinch around 60,000 tons of lithium per year by 2024 or so. Timely, because that’s right around the time GM is predicting its EV sales will explode.

How to Play GM’s EV Gambit 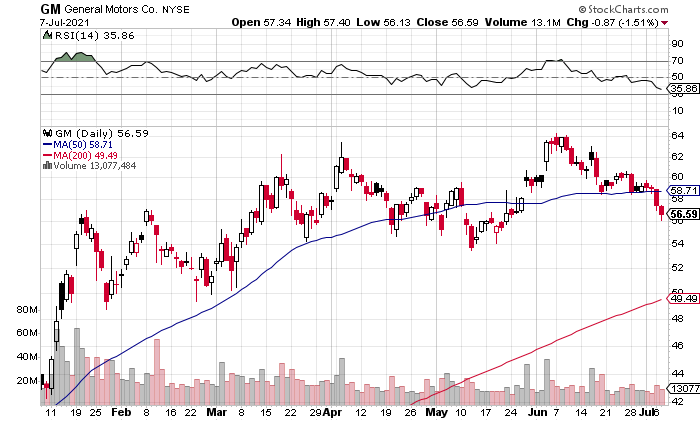 From a technical perspective, right now makes good sense. GM shares just slipped below their 50-day moving average and are headed back there, but they’re comfortably above the longer-term 200-day. Its relative strength index (RSI) reading of 38.96 is much closer to oversold than overbought, suggesting that, even in the short term, profits are ahead.

But make no mistake – this is a long-term play here on one of the market’s most lucrative and increasingly important segments. Pick up some GM here – set it on autopilot. Buy more on dips, and pass it along to your grandkids. Ultimately, with the stock situated the way it is, the sky’s the limit.