It has been a straight shot higher for 15 months. And we haven’t even seen a 10% pullback along the way.

That’s the bet that some folks are making right now. In fact, they’re parking their money in “safe haven” assets instead of stocks. Flows in municipal bond funds are near their highest level in more than a decade.

It might be tempting to follow their path after such a historic rally in stocks. But history says ditching stocks for bonds is not a good idea right now.

Instead, stocks have plenty of upside left.

Asking investors what they think can give you a glimpse into sentiment. But as humans, we have a bad habit of saying one thing and doing another.

That’s why watching what investors are actually doing with their money is always a better bet. And it’s what makes fund flows a great contrarian indicator.

They show us what investors are actually doing with their money. And that’s the best way to understand how much folks love or hate an investment.

If folks are pouring money into bonds, it means that bonds are in favor. And if people are taking money out of bonds, they hate the idea of owning them.

Today, investors are buying bonds once again. An astounding $120 billion moved into municipal bond funds in the first quarter of 2021. That’s one of the highest levels on record going back to 2006. Take a look… 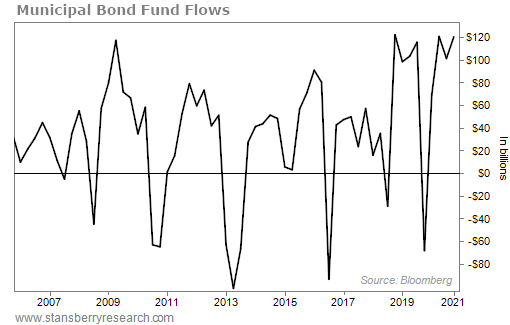 You can see that the amount of money moving into municipal bonds is near its highest level ever. Folks are moving out of stocks and into this safe-haven asset.

That’s the wrong bet to make today, though.

To see what this kind of move means for the S&P 500 going forward, I looked at each of the six previous times it happened since 2009. Five of those six cases led to solid performance in the S&P 500 over the next year… 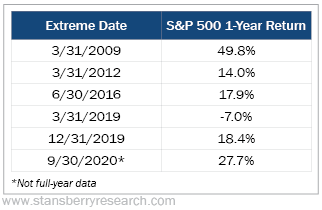 The S&P 500 fell on one occasion after this kind of setup… And it was down just 7%. Meanwhile, every other case led to double-digit gains.

In short, folks are pouring money into municipal bonds as stocks hit new highs. More than $120 billion flowed into bonds in the first quarter of 2021. But that doesn’t mean you should follow the crowd…

History shows that the S&P 500 could rally much higher from here, thanks to this negative sentiment. That means we want to stay long stocks.