The old saying goes, “There is no such thing as a free lunch.”

But in the stock market, I believe there is…

Over time, the stock market is an easy place to generate wealth.

Anyone can do it, although shockingly few do.

Time is our secret weapon because it unleashes the power of compound interest.

And compound interest is so powerful that it was once described by Albert Einstein as the “eighth wonder of the world.”

It is the single most important tool for building wealth.

Amazon’s (Nasdaq: AMZN) Jeff Bezos once sat down for a meeting with the great Warren Buffett to pick the Oracle of Omaha’s brain on investing.

Bezos said, “You’re [one of the] richest guys in the world, and it’s so simple. Why doesn’t everyone just copy you?”

Buffett just smiled and said, “Because nobody wants to get rich slow.”

At least once a week, I try to drill the concept of compound interest into my kids’ heads.

I have the chart below permanently taped to our refrigerator. 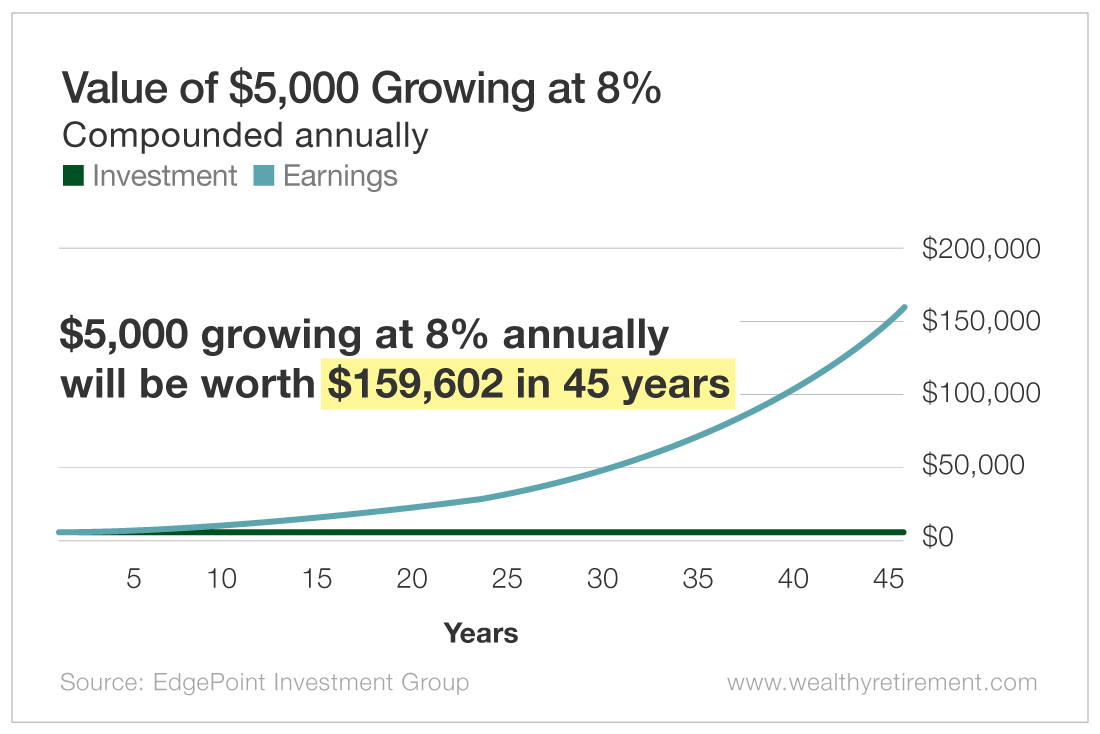 This chart shows how much wealth is created over time with compound interest if they were to invest just $5,000 now and earn an average 8% return.

Compound interest is a simple, clear path to millions for investors starting out with a modest amount of savings and a very achievable 8% annualized return.

I say “achievable” because an 8% return is less than what the S&P 500 has historically averaged over the past century.

Yes, an investor might be able to generate more wealth with a concentrated portfolio.

But a concentrated portfolio removes the certainty of eventual wealth creation.

We want our free lunch to be certain…

While we know that, over long periods of time, the stock market is going to go up at a rate of 8% to 10% per year, a concentrated portfolio offers no such guarantee.

Economist Hendrik Bessembinder performed a study of 90 years’ worth of returns (spanning from 1926 to 2015) for all U.S. stocks and compared those returns with those of one-month U.S. Treasury bills.

Over that period, Bessembinder found that the total wealth created by the stock market was $35 trillion more than what could have been earned with one-month T-bills.

Clearly, it paid massively to be invested in stocks rather than one-month T-bills.

But here is the shocking part…

Bessembinder also found that this $35 trillion of excess was generated by just 4% of all publicly traded companies.

Think about that for a second…

Just 4% of stocks generated all of the excess returns of the stock market relative to one-month T-bills.

That means, as a group, the other 96% of publicly traded stocks matched or performed worse than the return of one-month T-bills.

And Bessembinder’s study revealed that 60% – the majority – of stocks actually performed worse than one-month T-bills.

Investors who didn’t have that tiny sliver of stocks – the 4% of exceptionally performing companies – in their portfolio would have missed all of the stock market’s excess returns.

Chances are that many concentrated portfolios would not have included those big winners. Those investors would have missed the stock market’s free lunch.

As Vanguard’s John Bogle once said, “Don’t look for the needle in the haystack. Just buy the haystack!”

If you aren’t diversifying your portfolio, you are making a terrible mistake. (Note: Beware though… being too diversified can be just as damaging as not being diversified enough. So don’t get carried away.)

Patience and diversification are really the only two things you need…

Then that free lunch is yours.