Sports gambling is big business these days. It’s become much more mainstream over the past five years. Major shifts in public opinion have led 25 U.S. states to legalize sports betting in some form or another since 2018.

As of 2020, it was a $1 billion industry, and credible estimates say it’ll grow six times larger to $6 billion by 2023. From that perspective, it’s not all that different from the cannabis boom we’re seeing right now.

For betting companies and their shareholders, it’s like a license to print money – more and more as time goes on and gambling gets more market penetration.

But there are still doubters… kind of…

It’d be more accurate to say there are short-sellers. An explosive “report” this week on one of sports betting’s must-own names knocked the shares way down.

But I’m not worried about it, and I’ll show you why in a second. This is an opportunity to line our pockets and learn a little more about why good stocks tank sometimes…

Why This Stock Got Slammed This Week

DraftKings Inc. (NASDAQ: DKNG) is big. What started as a niche fantasy sports platform has evolved into one of the fastest-growing sports gambling companies in the country.

The company has been making big moves to capitalize on the growing popularity of sports gambling. In January, DraftKings announced that it was expanding into Virginia – making it the 12th state in which customers could wager using its platform.

And as of this past April, DraftKings is also now one of just three official sports betting partners of the National Football League (NFL). It also boasts lucrative partnerships with Major League Baseball (MLB), the National Basketball Association (NBA), the National Hockey League (NHL), several martial arts and pro fighting leagues, and even English Premier League soccer over in the United Kingdom.

On paper, the company has reduced its losses per share for each of the previous two years, and is coming close to profitability after a massive expansion campaign – one that seems to be going according to plan.

In its latest earnings report, DKNG showed a 252% jump in revenue as its number of paying customers rose 114%. DraftKings also increased its full-year revenue outlook to $1.15 billion.

But one famous “investment research firm” isn’t buying it…

Hindenburg Research – you know, like the exploding blimp – published a scathing “report” this week alleging big-time malfeasance from DraftKings.

In the report, which I’m only summarizing and in no way endorsing here, Hindenburg accuses SBTech – one of the companies with which DraftKings made a three-way merger in order to go public – of extensive involvement in black markets, money laundering, and organized crime. It also alleges that SBTech has operated illegally in countries like China and Iran for years.

Furthermore, Hindenburg claims its research shows continued efforts by DraftKings to obscure its illegal dealings, all while insiders cash out of DKNG stock.

But in many cases, it’s come to light that Hindenburg Research has a significant short interest in the stocks it’s “researching” and “warning” investors about. You might remember last summer, Hindenburg published a report on investor then-favorite Nikola Corp. (NASDAQ: NKLA) near the peak of its popularity. Here too, Hindenburg alleged all kinds of shady business at Nikola HQ and caused the stock to tank.

Hindenburg made a killing on the fall. Sure enough, this week, DraftKings shares dropped more than 11.7%… and Hindenburg disclosed a short position in DKNG. There’s no telling how much it made on the short, but it’s a safe bet that it was a lot.

The thing to remember is to always take these reports with a grain of salt, and even if no short position has been disclosed (they don’t have to be), assume that someone somewhere is making money when a hatchet job hits the Internet.

DraftKings Is a Great Buy at These Levels

On the other hand, Hindenburg did us a favor, gift wrapping a beautiful entry point in a stock I’d love to own at less than 50 bucks. 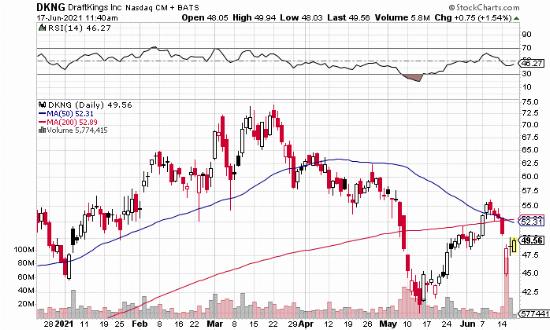 Because that $46 and change is your ticket into an industry that’s going to be six times more valuable in 2023 than it is today. Not only that, but you’ll own one of the best-positioned, most aggressive companies in the sector. The deals and partnerships DraftKings holds are incredibly valuable; it’s DraftKings’ game to lose.
From a technical standpoint, too, you’ve got a stock that’s been knocked below its 50- and 200-day moving averages (MA) because of thinly-sourced allegations from a party with a vested interest in knocking the stock down.

6.3% Yield: If You’re Going to Buy Anything Today, Make it This Stock

Buy This Stock (While It’s Still a Bargain)