The first stock I ever bought was Harley-Davidson (NYSE: HOG). I made 30% in two months and thought I was the second coming of Warren Buffett (if I had known at the time who Warren Buffett was… I knew nothing).

After cashing out with my $300 profit, I got a hot tip on a U.K.-based pharmaceuticals company called Glaxo, which today is GlaxoSmithKline (NYSE: GSK).

My second stock purchase didn’t go as well, which taught me a valuable lesson: to do my own research and not rely on hot tips.

But since that day more than 30 years ago when I bought Glaxo, I’ve followed the company. And as someone who loves strong dividend payers, I have had the company on my radar for a long time.

Over the last four quarters, the pharma giant has paid American investors $2.125 per share in dividends. Is that juicy 5.2% yield safe?

GlaxoSmithKline is one of the leading vaccine makers in the world. It makes an adjuvant that is used in some of the COVID-19 vaccines currently being used and in clinical trials.

It also makes Shingrix, the vaccine for shingles, and vaccines for diphtheria, tetanus, rabies and many other diseases.

Glaxo also makes dozens of prescription medications, such as antivirals for the flu, therapies for Parkinson’s disease and treatments for heart rhythm disorders.

Its consumer products division has many brand names that you’re likely familiar with, like Advil, Flonase and Tums, though that division will soon be spun off.

GlaxoSmithKline’s free cash flow has been up and down. Over the past three years, it has grown substantially, though this year, it is forecast to drop 18%, which SafetyNet Pro has a big problem with. 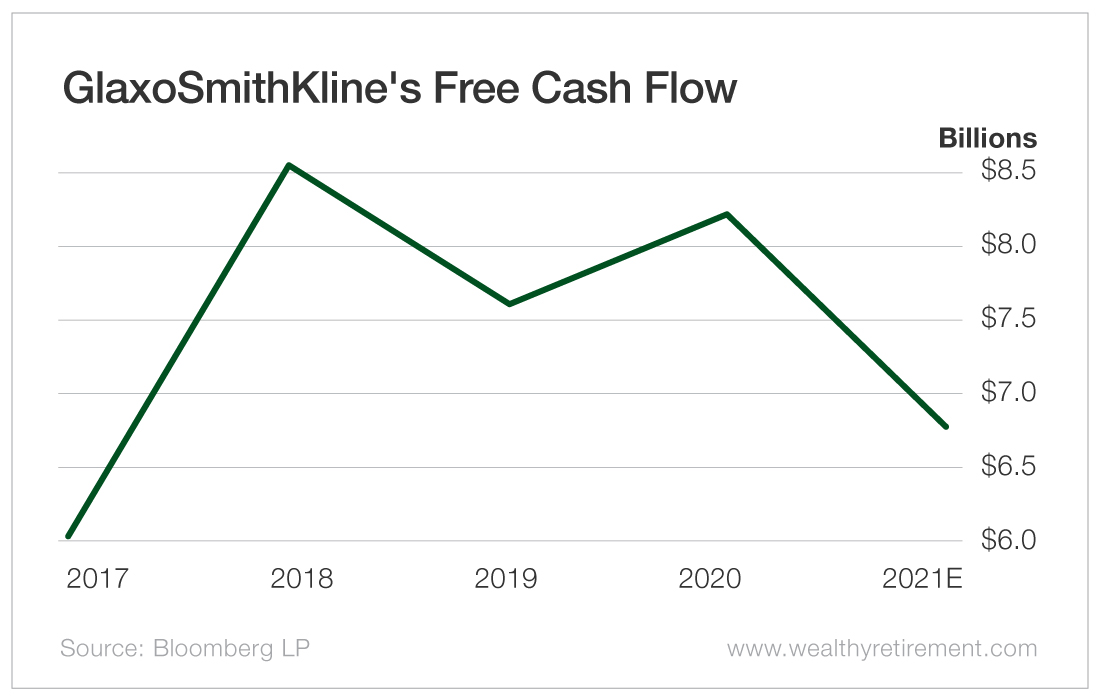 In British pounds, Glaxo’s dividend has remained the same since 2014. Of course, currency fluctuations affect the amount in dollars that American investors get paid. The company has not cut the dividend in at least 20 years.

In 2020, GlaxoSmithKline paid shareholders $5.11 billion in dividends, or 62% of its free cash flow. That’s a comfortable payout ratio. I typically like to see a payout ratio (based on free cash flow) of 75% or lower.

This year, however, because of the lower estimated cash flow total, the payout ratio is projected to be 84%, which is a little bit too high.

Management said it will comment on a new dividend policy on June 23 when it holds its investor day, so that could be significant. And with the spinoff of its consumer division, cash flow could decline further, which could impact the dividend.

While GlaxoSmithKline has the cash flow to afford the dividend right now, that may not be the case after the spinoff. There is some risk of a dividend cut in the near future.