One part of the world has been outperforming the U.S. over the last six months…

It’s hard to believe, given the incredible run we’ve see here in the U.S. But it’s true. And the outperformance can continue. That’s because Russian stocks recently broke out to new highs.

If you’ve ignored the rally in Russia up to this point, you haven’t missed out entirely. History shows there’s still upside potential from here.

These new highs actually mean that more gains are likely. We could see Russian stocks climb 17% in the next six months, based on history.

U.S. stocks have absolutely soared since bottoming in March last year. But that doesn’t mean other markets aren’t keeping up – or even outperforming.

Russia is one of those markets today. And with Russian stocks hitting new highs, the gains can continue.

We can see it through the MSCI Russia Index. It’s one of the oldest Russian stock indexes. And looking at the index’s history gives us a way to see what new highs mean for Russian stocks.

Normally, new highs tend to lead to even higher highs in the financial markets. That’s because stocks that are in an uptrend tend to keep moving higher in the short term. And stocks in a downtrend tend to keep falling to new lows. That has been true for Russian stocks over the past 25-plus years…

Since 1995, new highs have led to even higher highs 85% of the time over the following six months. And we are coming off one of those breakouts today. Take a look… 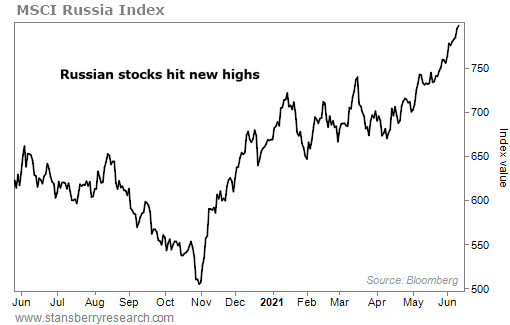 You can see the breakout in the chart above. Russian stocks have been on a nearly one-way move higher since November. And that trend likely has more room to run.

Since 1995, buying after setups like today’s has been a good idea… outperforming a basic buy-and-hold strategy…

Simply holding Russian stocks has been a fine strategy over the past 25 years, returning nearly 5% in a typical six-month period. But it pales in comparison to buying after a breakout like we’re seeing today…

Similar extremes have led to 7% gains in one month, 15% gains in three months, and a 17% gain over the next six months. That’s outperformance worth writing home about. And it’s the exact opportunity that Russian stocks are providing today.

The simplest way to take advantage of this setup is through the VanEck Vectors Russia Fund (RSX).

It’s a simple fund that tracks the Russian market. And given today’s setup, it’s an investment worth considering right now.