Imagine a market that’s up 86% in a little more than a year… but that investors are still too scared to buy.

It sounds crazy. Big gains tend to squash investor fears and send folks chasing after more profits. But that’s not happening in this specific group of stocks.

You see, investors ran for the exits back in March 2020. The pandemic was starting to ramp up… And stocks plummeted around the world. When that happened, the market I’ll cover today fell 34%, mirroring the fall in the U.S.

We are more than a year removed from that crash. Yet those who took losses last year are still feeling the pain. And they are staying on the sidelines…

Even more important, history shows this investor hate is creating a major opportunity. We’re likely at the start of a 20%-plus rally.

So what’s our mystery asset? What part of the world has been soaring despite incredible pessimism from investors?

The answer is emerging markets…

We can see the negative sentiment through shares outstanding for the iShares MSCI Emerging Markets Fund (EEM). Shares outstanding remain near pandemic lows despite a massive rally in this group of stocks.

That’s because funds like EEM can create or liquidate shares based on investor demand. If the secret is out about big gains and folks want to own emerging markets, EEM will create new shares to meet demand. And if folks are heading for the exits, EEM can cut shares. 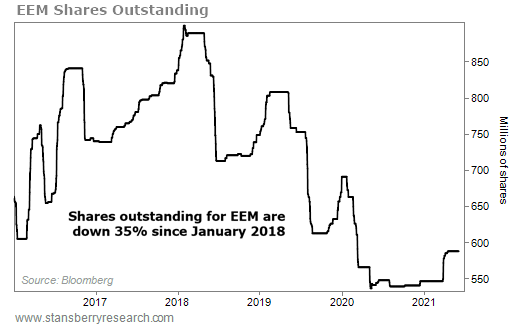 You see, similar lows in EEM shares outstanding have been buying opportunities in the past. Let’s take a look at what happened in 2016…

Shares outstanding for EEM hit a multiyear low that February. Investor fear was high. It was a great time to be a buyer, though. EEM rallied 32% from the end of February 2016 through late February 2017.

We saw another setup like this in 2018. Folks were bailing on emerging markets once again. Shares outstanding were near multiyear lows in the second half of the year. Then, EEM rallied 25% from its October 2018 low to its January 2020 peak.

Our last example came during the depths of the COVID-19 crisis. EEM’s number of shares fell 18% from mid-January to mid-March 2020. Then the rally started… EEM is up 86% since then.

In short, folks are scared to own emerging markets today. EEM’s shares outstanding are near crisis lows. But the negative sentiment is a good thing… It could send EEM even higher from here.

You can easily take advantage of this by owning shares of EEM. It’s a major emerging markets fund, and it’s the easiest way to bet on this rally.