I’m just as happy as anyone that the pandemic is ending here in the United States.

We’ve seen that “light at the end of the tunnel” since the first vaccines were announced last autumn, and now that light’s looking mighty close. More than 62% of Americans have had at least one dose of the shot, and it’s looking likely we’ll at least come close to President Biden’s goal of 70% by the Fourth of July.

Getting back to normal is probably going to be a big change for a lot of us, but it’s already bringing big changes for the market.

In fact, it’s already happening. I’m not saying it’s going to be bad, but it will be different.

There are three stocks I’ve got my eye on now – all of them are extremely popular, and they’ve all been outstanding performers during the pandemic. They’ve also recently moved off their peaks, which has investors thinking this is a “buy the dip” opportunity. It isn’t.

It’s time to lock in some nice, big profits and unload these shares ASAP. The sooner, the better…

The post-“COVID Crash” bull market was really a perfect storm, when you think about it; a lot of different forces came together to send stocks rocketing farther and faster than ever before – during an economic collapse. And I don’t think it would’ve been possible had the coronavirus exploded, say, 10 years ago.

It was really the tech and pharma companies that saved the day – Amazon.com Inc. (NASDAQ: AMZN) kept us fed and supplied, Netflix Inc. (NASDAQ: NFLX) and Walt Disney Co. (NYSE: DIS) kept us sane, Facebook Inc. (NASDAQ: FB) and Zoom Video Communications Inc. (NASDAQ: ZM) kept us connected and employed, Peloton Interactive Inc. (NASDAQ: PTON) kept us fit, and Robinhood kept tens of millions of new, risk-hungry investors in the green – and, without pro sports, entertained. The volatility surges they were seen to generate are still incredible to watch.

Every single ticker on this list saw all-time highs during the pandemic. And quite a lot of them are still well worth owning. I’m really excited about monoclonal antibodies and mRNA vaccine technology; I think the COVID-19 vaccines were just the start.

I also don’t see Amazon, Facebook, Netflix, or Disney falling too far, either; for a lot of reasons, we’re not done with these companies, and in fact, after some serious downward pressure, Amazon’s starting to look attractive.

But I think some of the other “pandemic stocks” that have seemed strong lately have actually hit their peak. It’s time to take profits and go.

Zoom Video Communications Inc. (NASDAQ: ZM) is one of them. This was one of the star performers of the pandemic because it almost singlehandedly allowed tens of millions of Americans to telecommute during lockdowns that shut offices from coast to coast. 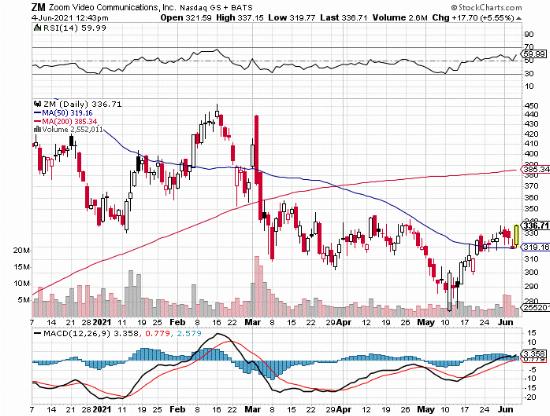 You can see here that its 200-day simple moving average is practically miles above where it’s trading now; that’s an extremely bearish sign in my book, as is the nearly overbought relative strength index (RSI) reading of 59.9. I don’t think Americans are through with working from home, but I think this stock is through spending time above $200 to $250. Sell, and if you’re feeling aggressive, trade bearish put spreads on the way down.

Abbott Laboratories (NYSE: ABT) hit the market early on with an impressive COVID-19 “rapid antigen” self-test that could yield results in five or 10 minutes at home at a time when the testing capacity was sketchy and people were afraid to leave their homes. The stock went ballistic during the pandemic, but now demand for its star product is plummeting along with infections and hospitalizations. ABT shares had been outperforming the market, but the company just slashed its forward earnings guidance to the bone. 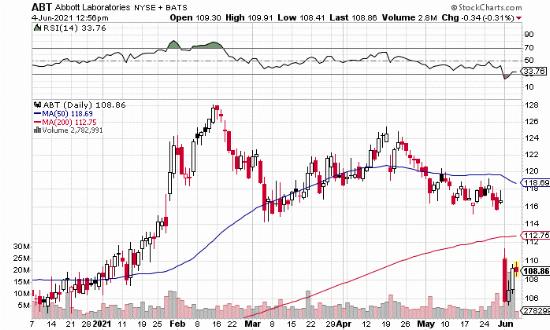 Abbott’s chart doesn’t look all that bad right now, all things considered, though it is below its 50-day simple moving average. But I think this is a dead bull. Over the next few months, there’s really nowhere for this stock to go but down. That said, the pandemic is still going strong elsewhere in the world, so this is one to sell – but I’m keeping my eye on this one.

ROKU Inc. (NASDAQ: ROKU) makes small hardware units consumers can use to stream their favorite subscription entertainment services right to their televisions. As Netflix and Disney added millions and millions of new subscribers between them during the lockdowns, Roku saw sales of its sought-after devices skyrocket. 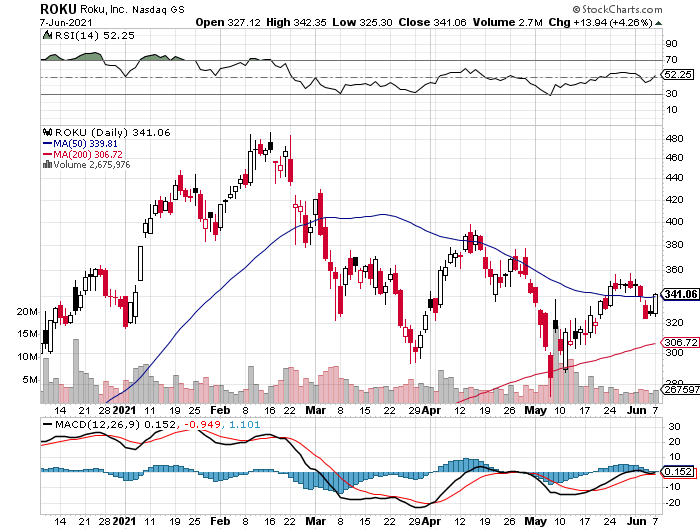 Trouble is, once you buy a Roku, you don’t need another Roku. The stock is down more than $130 from its February highs, and not a lot of investors have bought the dips. Its new entertainment and streaming offerings won’t be enough to save it from sliding much lower. Sell now.

No doubt about it, these were great stocks to own for more than a year, but it’s time to cut them loose and look for new opportunities like we’ve seen in Royal Caribbean Cruises Ltd. (NYSE: RCL) and American Airlines Group Inc. (NASDAQ: AAL).