MPLX (NYSE: MPLX) is a master limited partnership (MLP) that operates oil pipelines and other assets used in the transportation of energy. It was formed by Marathon Petroleum (NYSE: MPC).

The stock pays a quarterly distribution (MLPs pay distributions, not dividends) of $0.6875 per share, which comes out to a massive 9.5% yield. But can investors expect to continue to receive that massive payout?

MPLX had been growing cash available for distribution (a measure of cash flow used by MLPs) steadily. Last year, cash flow jumped to $4.33 billion from $3.49 billion, due in part to an acquisition in 2019.

This year, however, cash available for distribution is forecast to take a step backward to $4.13 billion.

The good news is that MPLX’s payout ratio is low. In 2020, it paid out just 70% of its cash available for distribution. I’m comfortable with an MLP paying out as much as 100%.

This year, due to share repurchases, despite the slightly lower expected cash flow, MPLX’s payout ratio is forecast to dip to 69%. 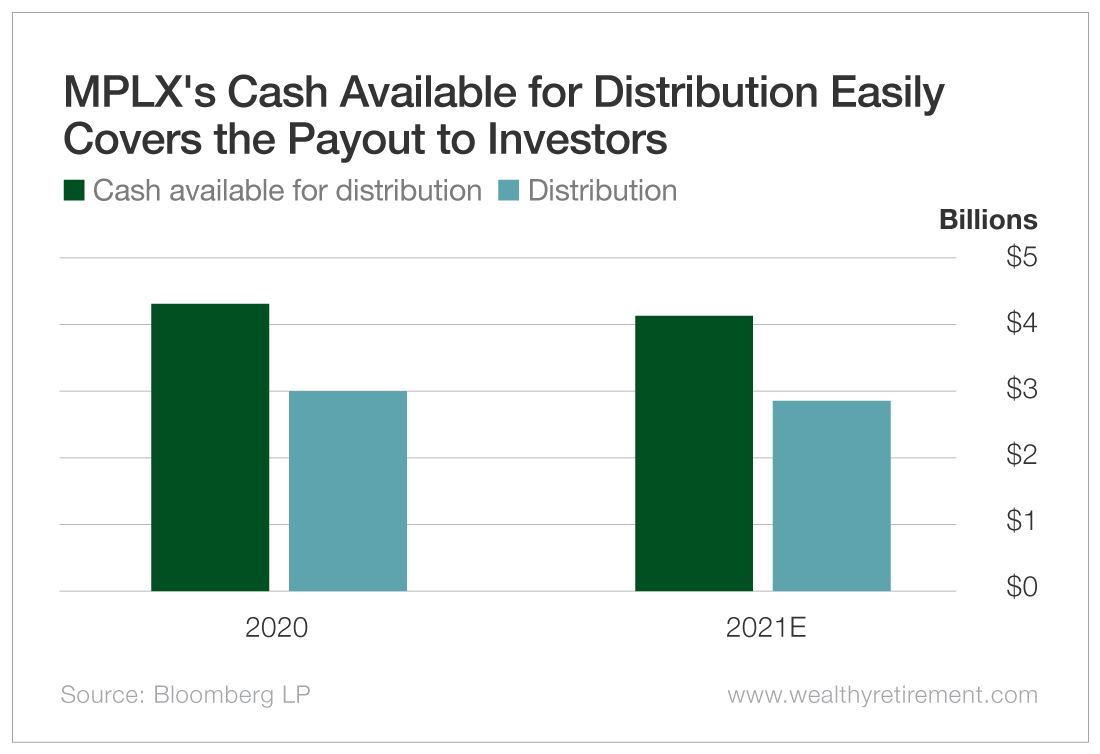 MPLX has a short but impressive distribution-paying history. It began paying investors in 2014 and has raised the distribution every year since.

Because of the low payout ratio and solid distribution track record, MPLX’s dividend safety rating really comes down to whether cash available for distribution does slip this year as forecast.

As of right now, the distribution is still considered safe because of the other factors that I mentioned. But if cash flow does end up lower this year and is forecast to drop again in 2022, that could deteriorate the safety rating further.

On the other hand, if cash flow comes in higher than last year’s total – which is certainly possible because we’re talking about only a $20 million difference (out of more than $4 billion) between what is expected this year and last year’s number – the distribution would be considered rock-solid.

So the final 2021 cash available for distribution number could have a big impact on the dividend safety rating a year from now.

In the meantime, over the next 12 months, the distribution is fairly safe.