You may find this hard to believe – but it’s true.

The problem is, too many investors get caught up in the “sell in May, come back in September” mindset. After all, they hear it time and again from the financial media.

And folks who follow this advice could be missing out on some of the best gains of the year. Here’s why…

I spent 22 years working on Wall Street. I dealt with many hedge- and mutual-fund investors… but most of my clients were hedge funds.

It’s impossible to stay on top of everything happening in the markets. You can’t look at it from every angle. So, I like to keep in touch with many of these hedge-fund guys. I point out things they may not have thought about, and they point out items I haven’t considered. It’s like nothing has changed.

Every year around this time, Wall Street strategists grow cautious on stock market returns. They expect money managers to “sell in May and go away,” as the saying goes in the financial world.

I’ve had a lot of conversations with former colleagues and clients about the S&P 500’s average returns from June through August. And everyone seems to forget one crucial detail.

Take a look at the chart below… 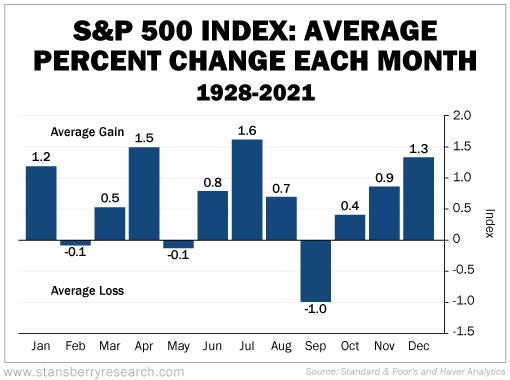 This shows the average gain in stocks each month over history. The first thing you’ll probably notice is that stocks do tend to fall – slightly – in May. But the most important takeaway is this…

In just a few days, we’ll be entering the best three-month stretch in any calendar year for the index, on average.

Since 1928, the average gain from June through August is 3.1%. (In a non-calendar year, November through January’s 3.4% average gain is the best.)

Not to mention, the average loss in May is a measly 0.1%… hardly a portfolio-busting drop. Instead of selling in May, the smarter money gets out of the way in late August ahead of September’s 1% bust.

I can remember several times last May when I turned on the TV to hear the talking heads bring up this “sell in May” idea. Many times, it comes up when they’re interviewing a Wall Street money manager. But what they fail to mention is that the individuals being interviewed are planning to spend June through August at the Hamptons or out on Nantucket Island…

They’re looking to relax and spend time with their families. That means their eyes are off the ball…

In other words, the big money managers tend to react less to the global events that are taking place. Don’t get me wrong – that doesn’t mean they’ve checked out. They’re just less active during the summer months.

I’ve seen this firsthand while working on Wall Street. Most of the business was done in the first and fourth quarters of the year. The second and third quarters were always the least active.

In terms of meetings, the summer months were the doldrums. Everyone was out of town. It makes sense. I would’ve loved to have done the same.

So, when no one’s minding the store (because they’re all on vacation), they’re missing out on some of the best gains of the year.

That’s your cue to stay in… and make money. Unless the Federal Reserve suddenly pulls back the stimulus punchbowl – which isn’t likely – we should see a steady rally for the S&P 500 this summer.