It’s a good thing my wife took her sweet time on this one… because taking her time made us an extra $100,000.

My wife bought a house near our home in Florida three years ago. Her plan was to renovate it and sell for a profit. (She actually likes putting on the tool belt, firing up the compressor, and doing much of the work herself.)

It was supposed to take 18 months for her to update the place like the folks do on HGTV. And she hoped her (mostly) sweat equity would result in a $100,000 profit.

The thing is, life gets in the way of finishing on time…

Personal stuff comes up. Contractors get busy and don’t get back to you. And hourly workers can be hard to find or don’t show up when they’re supposed to.

Nonetheless, my wife finally finished the house. And she sold it for well over $100,000 more than she had expected.

But here’s the thing. This crazy market doesn’t have to end. It’ll likely last longer than you imagine.

We’re only about five months into the year, and the urgency in housing has ramped up even more…

It’s like the housing market has turned into bitcoin… with prices soaring and people scrambling to figure out how to buy. Meanwhile, supply is limited, which is only propelling prices higher. It’s nuts!

Is the housing market in a Melt Up, just like the stock market? And will it eventually face a Melt Down just like stocks?

It’s a big question. And my answer may surprise you…

I still believe that the housing boom can continue. Yes, I am aware that this market is crazy. But – and this is the key point today – the boom doesn’t have to stop here.

To see why, we want to start by looking at the most basic economic data we can: supply. It’s where the crunch is most obvious…

The table below measures nearly 60 years of housing supply. Specifically, it’s what the U.S. Department of Housing and Urban Development (“HUD”) calls “months of supply.”

That’s the ratio of the for-sale inventory compared with the current sales rate for homes in the U.S. It tells us how many months it would take to sell every home on the market at current rates. Take a look… 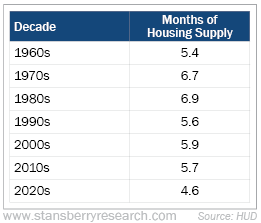 To make it easy to see, I’ve taken the average of each decade and laid it out in the table. You can see that a normal reading is around six months. What we’re seeing right now is around 25% less inventory than usual.

It also shows us something incredible… The housing supply is at record lows.

In fact, we hit the lowest reading ever recorded in October. That was a reading of 3.5 months… And we’re still near that historic low at just 3.6 months today.

Recent levels are as tight as what we saw during the 2000s housing boom. There simply aren’t enough houses out there to meet demand.

You’ve probably seen this yourself, if you’re in the market or know someone who is. On our little island in North Florida, houses don’t stay on the market more than a week or so. And prices are up dramatically versus just a few years ago.

It’s crazy out there. If you’re looking to buy a home anywhere even remotely desirable, it’s incredibly difficult. But it’s about economic fundamentals… not mania.

That’s why I believe the housing boom we’re seeing can continue.