And it’s about to end.

When did you last think about copper prices?

Most folks would answer, “never.” And that makes sense… Why would they spare a thought for boring old copper with the incredible rise in stocks we’ve seen over the last year?

This fact might surprise you, though… Copper bottomed the same day stocks did in 2020. And it’s actually outperformed stocks since then.

Copper is in the middle of a major move higher. But it has entered a major sentiment extreme as a result. And that tells me that the end is likely near.

Copper prices had fallen more than 50% from February 2011 to their March 2020 bottom. That kind of brutal and continuous decline made most folks give up on the metal. People stopped caring about it. But that has changed quickly.

Copper has more than doubled since bottoming last year. And lately, futures traders are all betting the good times will continue.

We can see this by looking at the Commitment of Traders (“COT”) report. This weekly report tells us what futures traders are doing with their money.

That makes it a useful contrarian tool. That’s because when these traders all agree, they tend to get it wrong. And we can use those sentiment setups to our benefit… by making the opposite trade.

After a year of massive gains in copper, futures traders have all been betting the trend will continue. These folks are coming off their most bullish reading in history. Take a look… 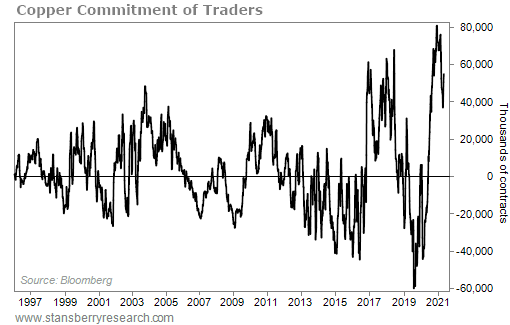 Positive sentiment from futures traders hit an all-time high at the end of 2020. It neared those levels again in February. And while it’s down a bit since then, we’re still at incredibly elevated levels compared to history.

As contrarians, this is important to understand. Futures traders are all betting the copper bull market will continue. But based on the last decade of data, that probably won’t happen.

For example, copper sentiment peaked in early 2011… Then, the metal fell more than 30% over the next eight months.

Sentiment soared again as copper prices took off from 2016 to 2018. But it peaked again alongside the metal in mid-2018… Prices fell 35% in less than two years.

Now, sentiment has hit even crazier levels. That doesn’t tell us copper has to crash immediately. But it does tell us that this bull market is overheated… And the end is likely near.

Until recently, this was a bull market few investors were paying attention to. Now they’re all over it. And that makes copper an investment you would be smart to avoid right now.