Each day seems like a significant development for the markets. But that’s not necessarily true…

On a shorter time frame, there’s a lot of “noise.” Some market moves have meaning, while others don’t mean much at all.

That’s why it’s a good idea to take a step back and look at the big picture from time to time. One of the best ways to do this is to consider the trends in major market indexes.

That’s what we’ll do today with U.S. stocks. And as you’ll see, the big picture is bullish…

Trends are the most important idea in technical analysis. When an asset establishes a trend – either rising or falling – it tends to keep moving in the same direction. Understanding and monitoring trends can dramatically improve your results in the markets.

We consider two main things when looking at moving averages…

Either way, if an asset breaks through support or resistance, it will often continue to move in that same direction.

The Russell 3000 Index essentially tracks the entire U.S. stock market. It consists of about 3,000 of the largest U.S. companies, which make up around 98% of the country’s total market value.

The Russell 3000 is market-cap weighted (like the large-cap benchmark S&P 500 Index)… So the biggest companies make up a far larger percentage of the index than the smaller companies. To give you an idea, the top 12 companies account for 25% of the Russell 3000.

Still, the Russell 3000 is one of the best ways to gauge what’s happening across the U.S. markets.

As you can see in the chart below, U.S. stocks are in a big uptrend. The Russell 3000 fell below its 200-DMA in February 2020 and dropped quickly. But almost as quickly as it fell, it snapped back above its moving averages and started to climb. 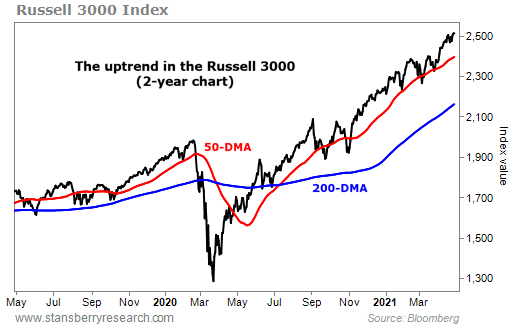 This is very bullish price action. U.S. stocks are trending higher. And they’ve hardly dipped below their rising 50-DMA. So both the short-term and long-term trends are up.

We’re a little concerned about the extreme bullish sentiment toward U.S. stocks we’ve seen lately. And stocks could pull back in the short term… But we’re not bearish. We would view a pullback as a good opportunity to add new bullish positions.