Shares of Levi Strauss & Co. (LEVI) recently broke out to a fresh 52-week peak following another solid earnings announcement. The company reported a first-quarter profit of $0.34 per share on revenue of just north of $1.3 billion. Wall Street was looking for a profit of $0.25 per share on sales of $1.25 billion.

The $0.09 beat was the fourth straight from Levi Strauss, with the prior three quarters topping estimates by $0.05, $0.30, and $0.01, respectively. More importantly, the company raised its fiscal first half 2021 net revenues outlook to 24%–25% growth versus for the first half of 2020 and upped its first-half adjusted earnings per share estimate to $0.41–$0.42. Analysts had expected a first half profit of $0.30 per share.

Although Levi Strauss has been around for 168 years, the stock became publicly available to trade again in March 2019 at around $22 a share. The company previously had its first initial public offering (IPO) in 1971 and traded until 1985, when the founder’s descendants took the company private in a leveraged buyout.

In the second IPO, the Haas family sold more than 21 million shares for proceeds of nearly $317 million. Additionally, due to the dual-class shareholder structure, the family still holds nearly 81% of the total shareholder voting power after the offering.

Each share of the Class B common stock the family holds is entitled to 10 votes, compared with one vote for the Class A shares. One of the key reasons Levi Strauss went public again as an IPO was to allow the family to cash-out some of their holdings yet retain control.

This was an excellent move, as Levi Strauss has doubled down on the brand and its capabilities. The company has used the pandemic to get a bit tighter on cost structure and will emerge from the pandemic with a brand that is on a tear around the world.

In a recent interview, the company’s CEO, Chip Bergh, said there is virtually no limit to upside from a pricing standpoint as the brand continues to resonate with consumers. He also noted looser fits are the fastest growing part of the business and could present a new denim cycle.

Analysts seem to agree there is more upside in the stock, with three strong buy ratings and seven buy recommendations. After the earnings beat, two firms upgraded the price target on Levi Strauss to $34 from $29 while another raised their price target to $29 from $25.

The chart below shows the strong breakout above the $26 level with the recent peak from last week tapping $27.73. Given the strong outlook for 2021 and the current momentum, shares could be headed above the $30 level by the summer. Near-term and rising support is at $26–$25.50 if shares pull back from current levels. The relative strength index (RSI) is showing the stock is slightly overbought at current levels with a reading north of 75 and when shares typically consolidate. 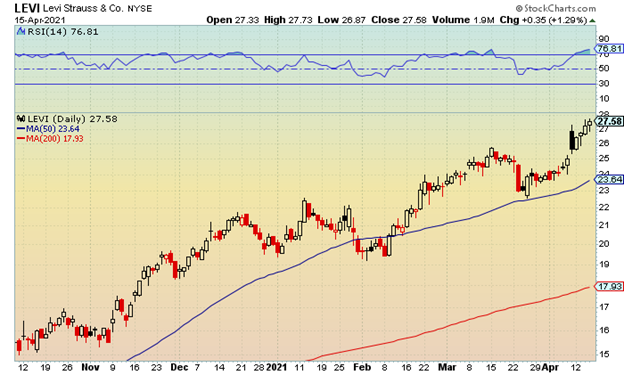 Conservative traders can target a great buying opportunity on any pullback into the mid-$20’s with the possibility of writing covered calls throughout the year to lower the cost basis.

Aggressive traders can target the LEVI July 30 call options, which are currently trading near $1.00. If shares can trade to the $32 level by mid-July, these options would double from current levels as they would be $2 in the money.