Over the years, Etsy (NASDAQ:ETSY) has gone from being a doubted e-commerce site to an accepted mainstream online retailer. ETSY stock has responded in kind, surging higher over the years.

Etsy shares have exploded over the past year, rising almost 300% in the past 12 months. That’s despite the stock falling more than 20% from its highs at one point and still being more than 10% off the high at current prices.

It’s longer-term gains are even more impressive, with Etsy stock sporting three-year gains of more than 650% and five-year returns of 2,400%.

Despite those lofty gains, there are still reasons to stick with Etsy.

It’s Not Getting Disrupted
One of the big arguments against Etsy was that it was too niche. Essentially, bears believed that there wasn’t enough growth here for Etsy to survive. Other platforms would lure away top sellers and the top products, leaving Etsy with essentially nothing.

In fact, it has been anything but. Many artists, designers and crafters have built their entire business around Etsy. It has helped them grow their brands and customer base, and many wouldn’t think about parting ways with the platform.

Despite other larger e-commerce sites out there — and valiant efforts by those sites to get into the niche craft markets — Etsy has continued to flourish. The reasoning is simple:

The Company Has Growth
Now that we’ve past the “Etsy won’t make it” stage, let’s turn our focus to the company’s actual business.

Last year, Etsy generated $1.73 billion in revenue, up 111% vs. the prior year. Let’s just take a moment to appreciate that level of growth, with revenue exploding over the past several quarters.

While last year’s growth was great, future growth expectations are what have me excited. Analysts expect Etsy to grow its sales by another 26%. Yes, that’s a deceleration from the prior year — how could it now slow? — but to actually grow on top of a year like 2020 is wildly impressive.

Even more impressive? Next year’s estimates call for 20% growth, followed by 23% growth the next year. Obviously these are just estimates and are at risk of being wrong. However, if we can bank on three consecutive years of more than 20% revenue growth after a year in which sales grew by 111%, then we have something really special on our hands.

Next is earnings. For those that think all growth stocks operate at a loss, Etsy is here to prove that theory wrong.

While the earnings growth is nice — and it’s great to see a profitable growth company — the revenue growth is really where it’s at. With Etsy stock, there’s a lot to like on this front over the next few years. 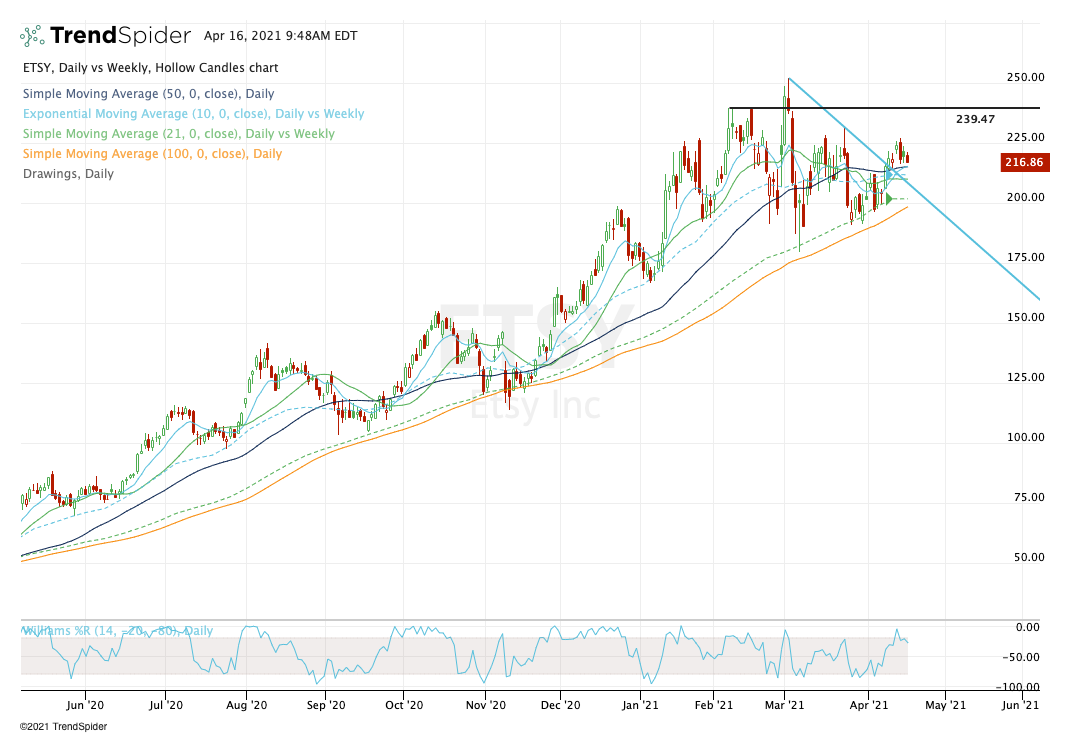 Trading Etsy Stock
Etsy’s platform is here to stay, as artists, sellers and buyers love it and the connections it can create. As a result, Etsy has solid growth forecasts for the foreseeable future.

Lastly, Etsy stock has a solid chart as well.

This company has been thriving through the novel coronavirus pandemic and there’s no reason that should stop. As a result, its stock price has been on fire, only recently cooling as other growth stocks were hit hard.

Etsy stock didn’t make it through the selloff unscathed, but it held up much better than many of its peers.

Shares are now back above all of its short- and long-term moving averages, as well as downtrend resistance (blue line). While technicians don’t want to see a move below the 10-week moving average, there should be solid support near $200 if it happens.

Near that mark is the 21-week and 100-day moving averages, which were solid support measures during the latest pullback. Further, the backside of prior downtrend resistance could lend some aid on the support front.

From here, it wouldn’t be unhealthy to see some more consolidation — just as we saw several quarters worth of sideways trading in the mega-cap tech stocks. However, an eventual move over $225 puts $240 to $250 back in play, with a breakout possibility above that.

The bottom line is simple: Etsy stock is a growth stock that we want a piece of, as it has a long and clear runway.