Investing for the future is crucial, but it can also be intimidating. The stock market is prone to volatility, even during strong economic times.

If you’re worried about losing money during market crashes, you may be tempted to invest in a way to keep your savings as safe as possible. However, sometimes “safe” investments are the most dangerous.

Keeping the bulk of your money invested in bonds or stashed in a savings account may seem like the smart thing to do because you’re less likely to see dramatic losses if stock prices plummet. But over time, you could potentially miss out on more than you think.

Missed opportunities
If you’re playing it too safe with your investments, you could be missing out on opportunities to help your money grow.

Savings accounts earn interest rates of around 1% or less per year. While they can be a smart place to park your cash for short-term needs (like an emergency fund), they’re outright dangerous for long-term goals. Over time, your savings won’t even keep up with inflation (which generally hovers around 2% to 3% per year), and your money will actually lose value over time.

The difference between earning a 6% annual return and a 10% average annual return may not seem like much. But it can add up significantly over time.

Say, for example, you’re investing $300 per month. You could invest it in bonds earning a 6% return or in stocks earning a 10% average annual return. Here’s roughly how much you’d accumulate over time in each scenario:

While you can make a significant amount of money by investing conservatively, in this scenario, you could potentially make nearly three times more over the course of your career if you’d have invested more aggressively.

What about the risks?
Investing in the stock market doesn’t come without risk. There’s always a chance that a market downturn could hit your savings hard. However, if you’re investing in the right places, market volatility won’t impact your money as much as you may think.

If you want to earn higher returns while still keeping your money relatively safe, one of your best options is an S&P 500 index fund. Since its inception in 1957, the S&P 500 has experienced countless market corrections, downturns, and full-blown crashes. Despite all the volatility, however, it’s also experienced an average return of around 10% per year. 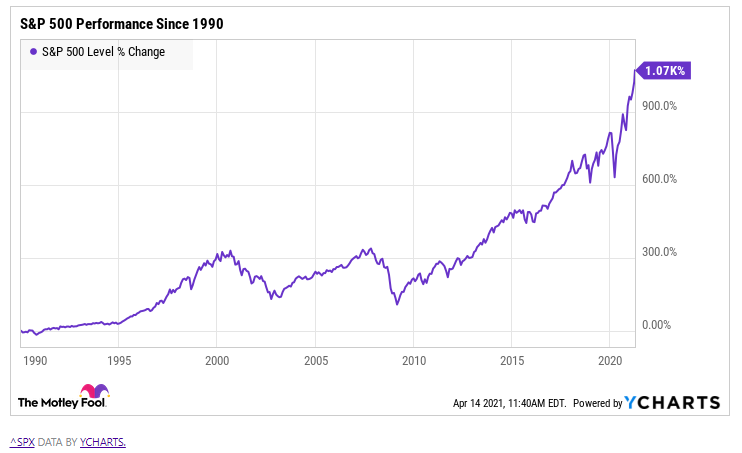 The market will have its ups and downs, but if you’re investing in an S&P 500 index fund, it’s very likely your savings will bounce back.

Also, it’s important to keep in mind that conservative investments like bonds aren’t always a bad thing. As you get older and closer to retirement, you’ll want to shift your portfolio so that it leans more toward bonds and less toward stocks. That way, if the market crashes just before you retire, it won’t wreck your retirement plans.

A good rule of thumb to consider is the rule of 110. Subtract your age from 110, and the result is the percentage of your portfolio that should be allocated to stocks. So if you’re 35 years old, for example, you should aim to invest around 75% of your portfolio in stocks and 25% in bonds.

The more time you have to save, the more aggressive you can afford to be with your investing strategy. Investing in stocks isn’t as risky as it seems and can help you save much more than you might think.