This most recent downturn is significant, but not for the reasons you might think. It’s certainly not significant in severity; it’s barely fallen 1% over the past few days, and it may very well have recovered to all-time highs by the time you read this tomorrow morning.

Rather, this slump is significant for what it means, for the market, for the broader economy, and not least of all for us: This latest downturn spells R-E-C-O-V-E-R-Y. Recovery from the coronavirus pandemic and the brutal recession it caused.

It’s exciting enough to think that, if everything goes smoothly, this coming summer and fall could feel much more normal – even if we won’t be all the way “through” – but the recovery is also creating a buying opportunity we haven’t seen in a year or more.

To put it another way, the market’s worst week in a while is shaping up to be a great time to shuffle the portfolio and buy stocks.

See, like I predicted a few months ago, capital is moving out of the so-called “pandemic plays,” like Big Tech, online retail, and the like, that soared to incredible highs when the pandemic was at its absolute worst.

And money is moving in – by the billions – to stocks that are keyed into a growing economy. We’ve seen metals prices climb nicely, and energy is especially well. Those are both sure signs of a recovery underway. Yields have crept up, which has freaked out investors, but that’s also a good sign; it’s been good for the financials, too.

Financials, energy, metals – those have been great lately, but I think the biggest, fastest profits to be had are in these three stocks I’m about to show you…

Entertainment: It’s hard to find an industry that has seen more negative sentiment than this group. AMC Entertainment Holdings Inc. (NYSE: AMC) quickly became the poster boy for the problems in the sector.

The movie industry is certainly hurt, but it was dealing with change since before “coronavirus” became a household word, wasn’t it? The rise of Netflix Inc. (NASDAQ: NFLX) and Walt Disney Co.’s (NYSE: DIS) Disney+ streaming services, and many others, has changed the face of the movie industry.

There’s one thing these streamers can’t replace, and that’s the “going to the movies” experience. It would be a mistake to discount the appeal of that experience for people who’ve been denied it for a year. I’m talking about monumental pent-up demand.

AMC itself last month went from “on life support” to “live wire” in a hurry as the retail investors of Reddit threw in to send GameStop Corp. (NYSE: GME), AMC, and a few other stocks to, frankly, insane highs.

But something really interesting has happened – and this didn’t make the news.

AMC has fallen almost 75% since the media circus, but the move has actually loosened the stock up for the rally that is getting ready to sweep AMC higher in what I am referring to as the “real short squeeze,” not a temporarily manufactured one.

To be clear, I am not suggesting that AMC will be a company that you will want to hold for the next five years; its future is just too uncertain with the seismic shifts in the movie business.

At $10.27, AMC sits around 45% below its 2014 IPO prices. The stock itself just completed a beautiful “golden cross” trading pattern. This technical pattern signals growing momentum for a stock as its shorter 50-day moving average crosses above its longer-term 200-day moving average. It’s the same momentum pattern that identifies improving trends in some of the faster-moving technology names.

The “golden cross” is convincing enough for me, but if that’s not enough, options traders are positioning for a large move according to the LEAPs call options that expire in January 2022 (LEAPs). This is often a signature that the “smart money” is positioning for a sizable move.

Short interest remains high on AMC with respect to its float, but not its short interest ratio. There’s a reason for the short interest to climb based on the company’s rising debt, but in the short term, the shorts will start moving out of the way of the improving trends, and they’ll pay through the nose to do it.

Like many stocks in the entertainment segment, AMC is just breaking back into a long-term bull market trend as the company’s stock crosses above its 20-month moving average. From a trader’s perspective, AMC shares are setting up for a rally to the $14 level, close to where the Reddit rally dropped it like a hot rock a few weeks back. That’d be a cool 40% gain from current levels. 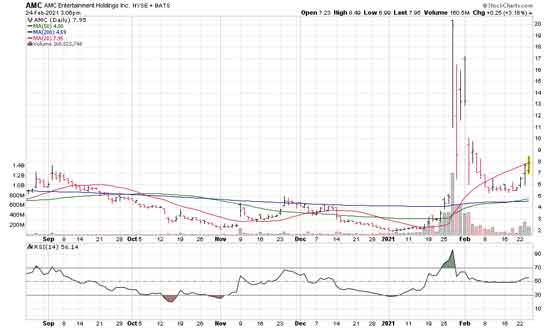 Dave & Buster’s Entertainment Inc. (NASDAQ: PLAY) was absolutely slaughtered during the pandemic – no drive-thru, and let’s face it, not many people really go there just to eat. Hell, its catchphrase before the pandemic was “Eat, drink, play,” which has since been dropped to simply “Eat & Drink.” Talk about losing your mojo.

On top of all of that, it has built quite the following as a “come and watch the game” spot, which was additionally hurt by the lack of professional sports.

What I’m saying here is that the company has a lot of catching up to do. Fortunately, that’s exactly what’s going to happen..

PLAY started trading publicly in 2015, so the Dallas-based company is relatively early in the growth phase, despite being around for a while. Pandemic trading took shares of D&B to prices below $5, more than 75% below its IPO pricing.

That dip has attracted true value investors – something you won’t hear me say often.

Revenue was slashed by 85% and is already rebounding – as is the stock, which is up 720% since the crash. I wouldn’t believe it if it weren’t staring me in the face, but there’s still significant upside here. The charts don’t lie.

D&B management upgraded its earnings guidance for 2021 and is expected to do the same when earnings are released in early April.

The stock is trading higher and just moved into a renewed bull market trend by crossing above its 20-month moving average. Shorter-term charts indicate building momentum as the 200-day moving average has shifted into a bullish trend.

Analyst price targets are behind – way behind – the market as the current average price target sits at $32.17 (a roughly 25% difference). Historically, this indicates that we’re going to see upgrades to analyst sentiment, which will drive even higher prices. 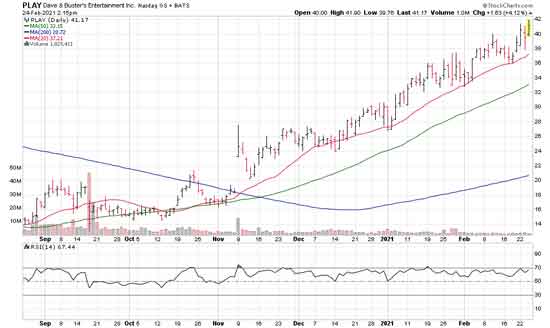 Last but not least is Penn National Gaming (NASDAQ: PENN).

One of the industries that has seen a dramatic growth while everyone else was closing is the gambling sector.

Companies like MGM are up there on my radar as a lot of people are going to rush out the door to hit Las Vegas after more than a year of being grounded at home, but there’s another movement that’s more powerful… what I call the “socialization of gambling.”

Penn National Gaming is one of the companies at the tip of the spear of this movement.

In 2020, the company made a large investment in Barstool Sports, an online media conglomerate that is based in New York. Barstool has a huge multigenerational following for a wide range of sports. Their personalities connect with listeners to create an amazing customer base for the online gambling scene, a business that Penn National is rocketing forward.

This is coming at a time when lots of states are loosening up their gambling laws, not unlike what we’re seeing with the cannabis sector.

The merger of these shifts in the gaming sector benefits Penn National over the large gaming resort companies that are running to keep up with the growing social giant.

The stock shows the fundamental story as shares are more than 3,000% higher than their March 2020 lows. That’s not a typo; I said “three thousand percent.” Compare that to MGM’s respectable return of 560%, and you see what I mean about the edge coming from the “socialization factor.”

On that note, Penn is now franchising the Barstool Sports brand in its in-person gaming resort. This will bring the younger generation “Stoolies” through the doors as well.

Shares are trading in a strong bull market trend with the 20-month rapidly rising. 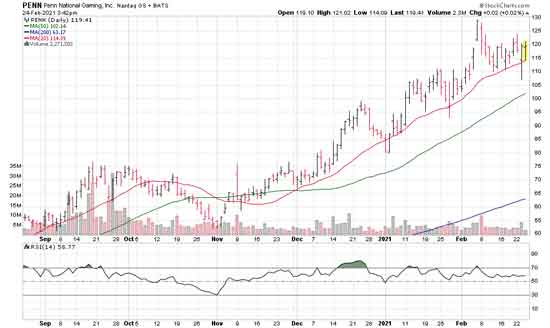 The stock benefits from strong support at its 50-day and 20-day moving averages, telling us that the active traders and professional traders are buying the dips.

The analysts are now playing catch-up with the stock, just like PLAY, as the stock’s price is now trading above average price targets. Just this week, we saw an analyst shift their target to $150; more are coming as the company’s game plan continues to play into a strong market’s hand.

I’m targeting a strong 2021 for this pandemic innovator as the country continues to open its arms, and laws, to grow the online and physical franchises. I’m looking for a $175 print on PENN, at least 54% higher than today’s price.

No one’s more excited than I am as we move the country and even the world into the recovery phase. It sounds cliché, but sometimes a cliché’s there for a good reason: These three opportunities really are just the tip of the iceberg. As the market rotates out of the “pandemic trade” and into recovery, we’re likely going to see high-upside plays like these coming fast and thick.