It is also one of the best-known companies in the world — the fifth largest by market capitalization as it approaches the fabled $1 trillion mark.

Its stock joined the S&P 500 index in late December.

One firm recently placed an “expected value” on it that is 700% above current prices!

Me? I think it has huge upside potential, but that’s because I see the company differently than everybody else …

You may have already guessed that I’m talking about Tesla (NASDAQ:TSLA), one of the most fascinating companies and stocks I’ve come across in my 20+ years of investing.

Momentum traders love it … and hate it.

Short sellers love it … and hate it.

Long-term investors are divided on whether it’s a breakthrough company that will continue higher or all smoke and mirrors and about to come crashing down.

Its founder, Elon Musk, is perhaps the most innovative businessman on the planet right now. He marches to his own drummer and is outspoken. And Wall Street tends not to like CEOs that create waves.

But no matter your opinion of Musk, there’s no denying what this stock has done over the last two years. It has soared 560% in just the last 12 months! 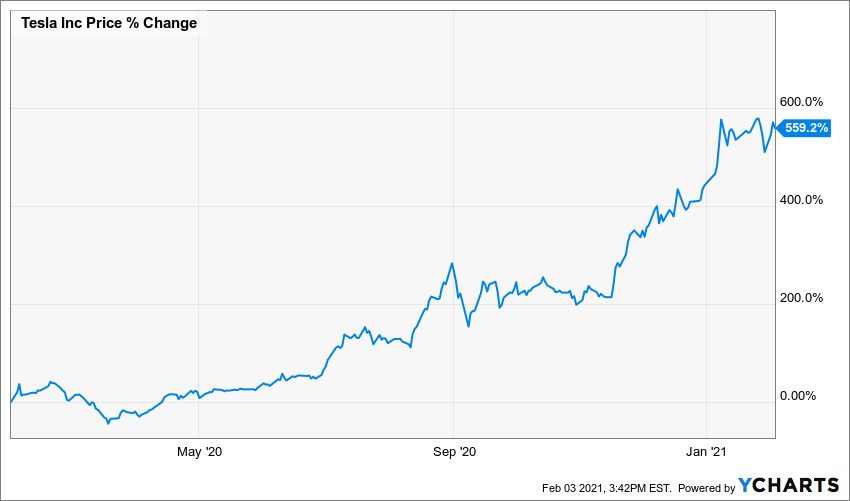 We’ve seen up close and personal over the last week that stocks can make big moves for the wrong reasons, like GameStop (NYSE:GME) and AMC Entertainment (NYSE:AMC). But a stock doesn’t make the kind of move Tesla has without something real going on.

So real, in fact, that the company just reported its first full-year profit in its 18-year history. Tesla earned $721 million in 2020, a mind-blowing reversal from a loss of $862 million in 2019. Analysts expected an even bigger profit!

Still, Tesla has gotten some very favorable analyst coverage of late. ARK Invest put its “expected value” on the stock at $7,000 per share in a recent report! Its best-case scenario is $15,000, which is more than 1,600% above current prices.

It’s rare for analysts to have the guts to put that kind of analysis out there, but let me say that I have a lot of respect for ARK Investment. I think Cathie Wood, who is the CEO and chief investment officer, is one of the smartest analysts out there.

In addition, Piper Sandler raised its target price to $1,200, more than double its previous $515 target.

And I have to mention, the firm with the lowest target is J.P. Morgan at … $135. I don’t even know what to say about that. I told you some people aren’t convinced.

If you ask most of these analysts and pretty much anybody on the Street what Tesla does, I can guarantee you the answer will be that “they make electric vehicles.”

I’m all about electric vehicles (EVS) and the critical role they will play in the future of transportation. I’m on the waiting list for Tesla’s Cybertruck, some of which could start delivering this year. I believe it will be one of the leaders — if not the leader — in EV sales around the globe by the end of the Roaring 2020s.

But … as big and important as EVs are, they are not the most important part of the company’s future.

What really gets me excited about Tesla is battery storage and the technology it is working on today … and more importantly where it will be in the future.

Tesla Energy is still a small division of the company, but as the renewable energy industry grows — especially now with President Joe Biden’s clean energy initiatives — this division should move into hypergrowth territory.

If renewable energy increases to produce about 40% of electricity in the next 10 years, it will be highly dependent on solar energy. That’s why I have Tesla in my Investment Opportunities Solar Power/Clean Energy Portfolio.

Tesla is already in that industry with its SolarCity subsidiary, which designs and sells solar panels. And at the end of January, the company announced it will start making inverters, which change solar energy from direct current into alternating current to connect to the grid.

Still, it’s biggest advantage of all may be batteries. According to Piper’s estimates, Tesla will control more than one-third of the stationary battery market by 2033. Stationary batteries are backup systems, so they are used in houses and buildings — not so much EVs. Because of the company’s head start and the massive need to store energy, the projection is not outlandish.

Solar power is now at the tipping point where costs just about make it a no brainer. Bloomberg NEF predicts that by 2025, the cost to generate power from solar will be cheaper than oil for the first time ever. Money talks, and this would open the door to mass adoption of solar.

In fact, a massive change is already underway.

In 2019, only about 2% of electricity in the U.S. came from solar power. (Right away, you can see the huge growth potential.) At the same time, solar accounted for 18% of all new energy capacity last year.

Solar energy has been around longer than you might think. It was discovered way back in 1876, but it is now at an inflection point as technology improves and costs come down. Part of that is better backup batteries to store energy, and Tesla is the leader.

As the Roaring 2020s move along, the upside potential in solar gives us one of the best opportunities in the entire investment world. When crazy market action makes those stocks cheaper, you get buying opportunities you can’t pass up.