The cannabis sector as a whole has risen more or less uninterrupted in the past six weeks. Cannabis was already having a good 2021, as we expected, but it’s gotten even better in the last 48 hours.

Why? Well, the prospects for legalization have never been so bright.

Late Tuesday, Senate Majority Leader Chuck Schumer remarked that marijuana reform was “a key priority” for this session, and two Senators, Ron Wyden (D-OR) and Cory Booker (D-NJ), announced they would be putting forward reform legislation in a matter of “weeks.”

Of course, we’ve sort of heard comments like these before, but the truth is these statements mark the very first time lawmakers have made an actual, formal commitment to marijuana reform.

And that means, despite the rapid 80%-plus profits we’ve realized already, there’s still at least some time left to move into a very specific kind of American cannabis business…

We’ve seen triple-digit gains from across the legal cannabis sector, from real estate investment trusts (REITs), to processors, to geneticists, to farming operations. And there’s every reason to expect that to continue.

But truly superior returns are coming from one red-hot–and-getting-hotter segment. 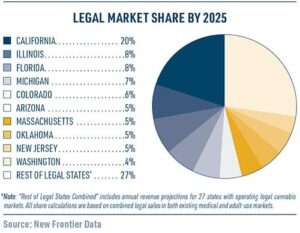 Very simply put, these are companies licensed to grow, process, and sell cannabis across multiple U.S. states in the biggest marijuana market on the planet. Legal, global cannabis sales hit $15 billion in 2019, and more than 90% of that total – $13.6 billion – came from the United States.

Bear in mind, those are 2019 numbers. By 2025, New Frontier Data is projecting U.S. cannabis sales will reach $41.5 billion. The chart at the left does a fantastic job of spotlighting states that are already powerful cannabis profit engines but offer much more upside to come.

The dominant MSOs, the best investments, will of course be in the biggest markets.

Take Trulieve Cannabis Corp. (OTC: TCNNF), for example. It sells around 50% of the cannabis in Florida. But a savvy CEO like Kim Rivers knows full well that you have to be in California, Connecticut, Massachusetts, and Pennsylvania, too – and that’s exactly where she has expanded operations.

That kind of strategic growth vision is actually common to the best MSOs.

Now, as I said in December and again last month, I think Jushi Holdings Inc. (OTC: JUSHF) and Curaleaf Holdings Inc. (OTC: CURLF) are two of the best MSOs out there. After all, combined they’ve done around 20 times better than the S&P 500 over the same time frame.

In fact, I think they’ll be the top two MSOs in 2021, but the fact is, there’s an easy way to own all the best MSOs on the market right now.

You Can Cover the Majority of the U.S. with These Shares

The AdvisorShares Pure U.S. Cannabis ETF (NYSEArca: MSOS) is also up double-digits so far this year, more than 28%, in fact.

But again, I really think the best is yet to come here.

Why? Well, MSOS is a little different; it’s a cut above, frankly. While there are certainly some other dynamite cannabis-sector exchange-traded funds (ETFs) out there to own, MSOS’s basket of stocks is filled solely with businesses in U.S. states that have legalized to one degree or another.

In other words, just like it says on the “box,” MSOS is a pure U.S. cannabis ETF.

Other cannabis ETFs can and do hold illiquid and volatile Canadian companies, medical firms with iffy, tenuous ties to cannabis, and pick-and-shovel plays. Don’t get me wrong: Some of those kinds of companies can make for great speculative plays… but these are not necessarily companies you want lumped together and piled into a truly foundational, bedrock cannabis portfolio holding like MSOS.

I’d jump at the chance to grab MSOS at market… or in the unlikely event of a dip.