As central banks around the world spin up their money printers, the rise of cryptocurrencies will not just blow up the old model of banking…

What exactly is the monetary policy for the dollar? I can tell you… It’s a small committee of bankers who lick their fingers and lift them in the air to gauge which way the market is going.

If things feel a little breezy, they crank up the money printer. If the wind’s blowing in a different direction, maybe they slow the printer down.

The only thing they never do is stop the printer altogether.

That’s why the dollar is the first battleground of the coming “financial reset.” And it’s why bitcoin and cryptocurrencies are reaching a tipping point today that will force them into the mainstream.

The U.S. dollar has lost 95% of its value since 1913, when Congress passed the Federal Reserve Act and “modern” central-bank policy began. Since then, the Fed has only increased its interventions over time.

Yet the Fed keeps printing money, with seemingly no end in sight. Take a look at the assets of the Fed last year alone… 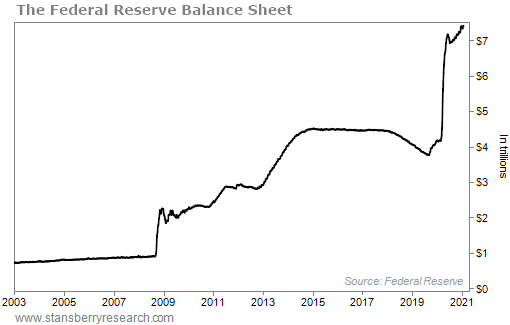 I’ve read all about Modern Monetary Theory (“MMT”), which the Fed is clearly a believer in. It’s a cute theory… It basically says governments can print as much money as they want for as long as they want with no real repercussions.

Even a kindergartner could tell you that doesn’t make sense. You can’t create value out of nothing. You can’t conjure it out of thin air.

There has been no alternative to the dollar.

What about gold? Well, gold is great. I own enough to keep myself fed and housed if the global economy truly collapses – and its price skyrocketed through much of the summer – but as a currency, gold is simply too hard to use for everyday transactions.

It requires you to trust other people (either the people issuing gold-backed assets or the people holding it in vaults). And if that’s the case, it’s not that much better than the dollar.

This is where bitcoin has an advantage…

Bitcoin is a form of digital money that runs on thousands of independent computers all around the world. It’s not controlled by any one person, organization, or government… And its monetary policy is set by computer code.

Now, you might be wondering… Isn’t bitcoin created out of thin air, too?

Here’s a simple, unequivocal answer for you… no.

The only way new bitcoin enters the world is by “mining” it – running high-powered computers that contribute computing power to the bitcoin network. It’s estimated that bitcoin miners expend more energy creating new bitcoin than the mining industry does digging fresh gold out of the ground.

The most bitcoin that can ever be created is 21 million. And the amount of new bitcoin that’s created is currently growing at 1.8%, just above the 1.4% of the U.S. Consumer Price Index.

So bitcoin is scarce. It takes control of the money supply out of the hands of a cabal of politically influenced bankers, and instead entrusts it to the inalienable laws of mathematics.

In other words, bitcoin is the ultimate backstop for when the dollar blows up.

I believe we’ll see one of two things happen in the years ahead – either the world will adopt bitcoin as a global reserve currency, or it will adopt a basket of currencies that will eventually include bitcoin.

China is already piloting a digital yuan in several of its largest cities. Bank of England Governor Mark Carney was calling for a new virtual reserve currency before he left his post last year. And Japan is working on a digital yen.

Even the Fed Chair Jerome Powell, not long before the COVID-19 outbreak, said the central bank was in the early stages of researching “digital currencies.”

These digital alternatives to the dollar are coming just when the world needs them the most. So it makes sense that even the U.S. is preparing for bitcoin to take on a bigger role…

On July 22, the Office of the Comptroller of the Currency (“OCC”) – the Department of the Treasury agency that regulates the U.S. banking system – quietly released a letter telling banks that they could “custody” cryptos on behalf of their customers. Then in January, the OCC said banks could use blockchains to transfer value.

In plain English, this means that overnight, cryptos have become as legitimate of an asset as the title on your home or car or a certificate of deposit.

I call it one of the biggest news events since the bitcoin network first hummed to life in 2009.

Bitcoin has changed money forever… And it’s right on the cusp of going mainstream.

This is how the financial “reset” happens.

The investors who realize this are going to become fabulously wealthy in the process – if they know where to look. I’d encourage you to start preparing for what’s coming today.