Launched in 2014, a cryptocurrency called Verge (XVG) billed itself as a “privacy coin” that would allow untraceable transactions.

It traded flat for years. But something happened in late 2017.

A big software update called Wraith Protocol was supposedly coming before the end of the year.

Finally, XVG would realize its dream of becoming private electronic money. Buyers piled into the coin. The token price doubled every two and a half days for nearly two weeks.

But crypto is unique. It’s different from any other kind of technology. And because of that, this situation changed quickly.

This dynamic – and the unique nature of crypto investing – is something you must understand as an investor. So let me share the rest of the story…

But then, Verge’s lead developer dropped the ball. The promised software update didn’t come out by the end of the year, and Verge prices collapsed nearly as quickly as they’d risen. Take a look… 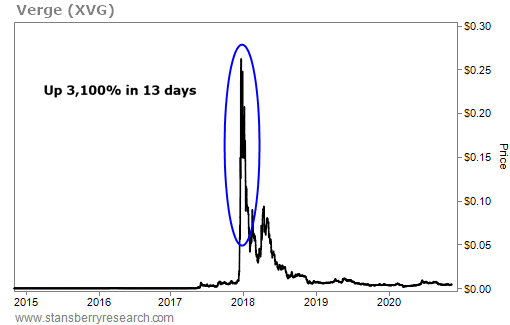 Its price has never reached those levels again. Today, Verge’s homepage doesn’t even mention privacy technology. And there are a host of other privacy coins, including Monero, Zcash, and Grin.

There are two big reasons for this. First, crypto is uniquely monetized – there’s an economic incentive baked into the technology. If you’re a developer who releases a crypto, the market gives you immediate feedback on its value. Your token’s either worth something or it’s not. So good ideas thrive… and bad ones disappear almost immediately.

Second, crypto projects are open source. Their source code, or the computer code that makes them work, is given away for free. That means anyone can take existing crypto code and “fork” (or copy) it, change it in some way, and release it. That’s why more than 5,000 cryptos exist today.

This ability to build upon existing technology and get immediate feedback on its value has led to something I like to call “idea Darwinism”… where only the fittest survive. Each new idea breeds more new ideas, and the industry’s pace of change accelerates.

The pace is now so fast that projects can balloon from ideas to $100 million in market cap in days. Or the reverse can happen just as quickly… where a crypto collapses from millions of dollars to nothing.

In short, this incredible volatility can work to your advantage… but you must understand what you’re investing in.

That’s why if you’re a crypto investor, now is a good time to make sure you only have the cryptos that are set to thrive over the next year.

For all the gains we saw in 2020, I believe 2021 will be even more spectacular. That’s because crypto has finally reached the point where it’s ready for mass adoption…

More than 300 million people can now buy cryptos on PayPal. Massive corporations and even insurance companies are adding bitcoin to their treasuries. And Facebook has plans to launch a crypto soon.

All the fundamentals are aligning for a massive new wave adoption. And you want to be in the right cryptos before that happens.