The stock market was having a rough session on Wednesday, with all major averages in the red. But there was some interesting price action going on in some heavily shorted stocks. GameStop and AMC Entertainment were understandably grabbing most of the headlines, as continuing short squeezes drove those stocks higher by 89% and 232%, respectively, as of 10:30 a.m. EST.

However, it’s important for investors to notice that there is a broader short squeeze going on.

Some real estate stocks — specifically those in the retail and hospitality subsectors — have been targets of short-sellers ever since the pandemic dramatically hurt their businesses.

And many of them are being short-squeezed as well.

Specifically, outlet mall REIT Tanger Factory Outlet Centers was higher by 12% after rising by as much as 30% earlier in the session. Mall development REIT Seritage Growth Properties was up by 14% to its highest level since the pandemic started.

Entertainment REIT EPR Properties — whose largest tenant happens to be AMC — was up by 11%. And last but certainly not least, mall operator Macerich had soared by 20%.

Although they aren’t having the headline-grabbing moves of AMC or GameStop, these four companies (with the exception of EPR) are some of the most heavily shorted stocks in the market. However, in EPR’s case, it is likely getting a boost based on its relationship with AMC (EPR is one of AMC’s biggest landlords). So it’s not surprising that they are seeing some ripple effects from the higher-profile short squeezes going on.

Here’s a look at the short interest for these four stocks (plus the two headline-makers) as of Dec. 31, 2020. As a reminder, short interest is the percentage of a company’s shares that are available to trade (the float) that are sold short. 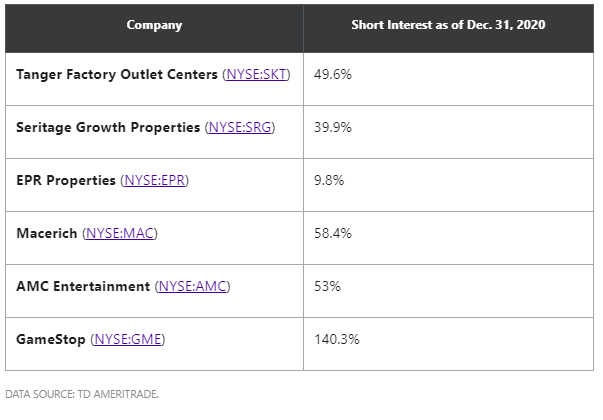 While AMC and GameStop are extreme examples, it’s important to note that as a rule of thumb, I typically consider any double-digit percentage to be a relatively high level of short interest in a company.

It’s also worth saying that not only are these stocks rocketing higher, but they are all also very volatile. By the time you read this, it’s quite likely that their gains will be significantly different from the figures cited here.

And as a final thought, it’s important to realize that a short squeeze doesn’t have any impact on a company’s underlying business, nor does it affect the long-term reasons for owning a stock. So if you have any of these short-squeezed stocks in your portfolio, take a deep breath and relax. There’s no reason to do anything today.