It’s not necessarily after the crisis is over, either. Instead, it’s when a market completely erases the losses it endured from the terrible event.

I’m talking about when a market breaks back out to new highs. This simple measure is the market telling us that what used to be a concern isn’t anymore.

That happened for the U.S. market in August 2020. And the S&P 500 has rallied double digits since then. But many global markets have taken longer to reach new highs.

Now, it’s happening in German stocks. The German Stock Index (“DAX”) broke out to a new 52-week high over the past month.

It’s this market’s way of putting the pandemic in the rearview mirror. And it could mean double-digit gains over the next year.

Hitting 52-week highs isn’t as rare as you might think.

When a stock breaks out above a previous high, the old high is no longer the record over that period. This happens fairly often. Markets can hit high after high after high during a bull run.

That’s why we look for “new” 52-week highs to see if a market is truly breaking out.

This highlights the first time a market has hit a high in at least a year. That means it only triggers once over a 52-week period. And it gives us a way to find markets that are just starting to break out.

Catching a move like this can lead to significant outperformance for investors. And Germany’s DAX Index achieved this feat recently. Take a look… 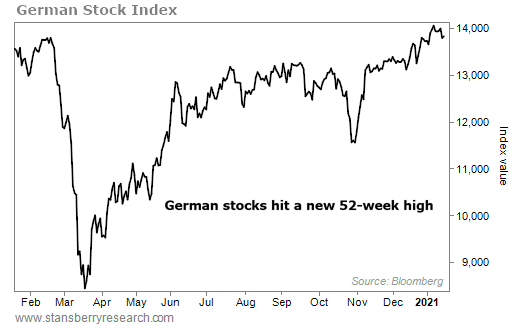 Like the S&P 500 in the U.S., the DAX is Germany’s benchmark index. It holds a broad swath of German stocks to represent the entire market. But unlike the S&P 500, the DAX didn’t rush back to new highs as quickly after the COVID-19 bust.

It took several more months to reach new highs. But now that it has happened, we can expect these gains to continue.

Since 1990, breakouts like we are seeing today often lead to outperformance over the next year. It could mean double-digit gains in Germany’s market. Check it out…

German stocks have been great wealth-generators for three decades… returning a healthy 7.7% a year. But you can do even better by only buying after new highs…

Similar cases have led to 7% gains in three months, 10% gains in six months, and a solid 11% gain over the next year. Those are impressive returns for a mature market like Germany.

The COVID-19 crisis isn’t over yet. But when it comes to the markets, German stocks have put the pandemic behind them. So if you’re looking to add exposure outside of U.S. stocks, history shows buying German stocks is a good idea.

This Stock is Up 1,000% and Still Has Plenty of Upside Ahead

‘The Price of Prosperity’: When Great Businesses Fail

The Road Ahead for Renewables

Upgrades and Downgrades for Thursday, 2/25