It’s like doubters of Advanced Micro Devices (NASDAQ:AMD) keep waiting to wake up one day and see the stock in free-fall as bulls overplayed their hand. The truth is, AMD stock remains a great bet on the future of technology.

They’re becoming more demanding, which increases the need for GPUs and chipmakers like AMD.

The fact that AMD was a penny stock a few years ago and on the brink of survival has cemented a lot of doubt within the bear camp.

Fortunately, their theses are out of line. While it’s possible the company has a hiccup or two along the way, AMD continues to take market share at a time where the market is growing.

That’s exactly the kind of thing bulls want to see and it’s exactly why the stock has done so well. Now AMD is leaning on a bevy of industries — including crypto, AI, automotive, gaming and cloud-computing to name a few — to drive its business.

Unless these industries are going to unravel, neither will AMD stock.

As we round out 2020, analysts expect AMD to grow revenue more than 40% to $9.5 billion. They further expect earnings to nearly double to $1.23 per share.

Just think about that for a minute. In a year marred by a pandemic, Advanced Micro Devices is forecast to grow sales 40% and almost double its bottom line. Even better, those estimates accelerated dramatically over the past 12 months.

In July 2020, these consensus estimates stood at just $8.4 billion and ~$1.05 per share. Again, that’s where estimates stood for 2021 roughly six months ago. Now AMD is easily surpassing those totals in 2020.

Two-year forward estimates call for another 20% in revenue growth in 2022. Who knows, perhaps that’s conservative too.

Friends, the key to successful long-term investing doesn’t start with a stock chart. It starts with identifying the long-term business trends, then focusing on the companies that are winning in those spaces. The technicals matter from the perspective of timing, but with enough patience and time, the fundamentals will be what drives these names higher.

As these end markets grow, so do the opportunities for AMD. It’s what has allowed the company to go from a penny stock to making major acquisitions.

Growth Beyond the Field

Here’s another trend to focus on: financials.

Over the last several years, but particularly over the last 18 months, AMD has seen its free cash flow soar, its gross and operating margins climb and its debt plunge.

At year-end 2017, AMD had total assets of $3.54 billion and total liabilities of $2.92 billion. Now, those figures sit at $7 billion and $3.15 billion, respectively, representing a massive improvement. Total long-term debt has gone from $1.33 billion to $578 million in that span as well.

In other words, AMD is more profitable, has less debt and has the right trends with its financials. 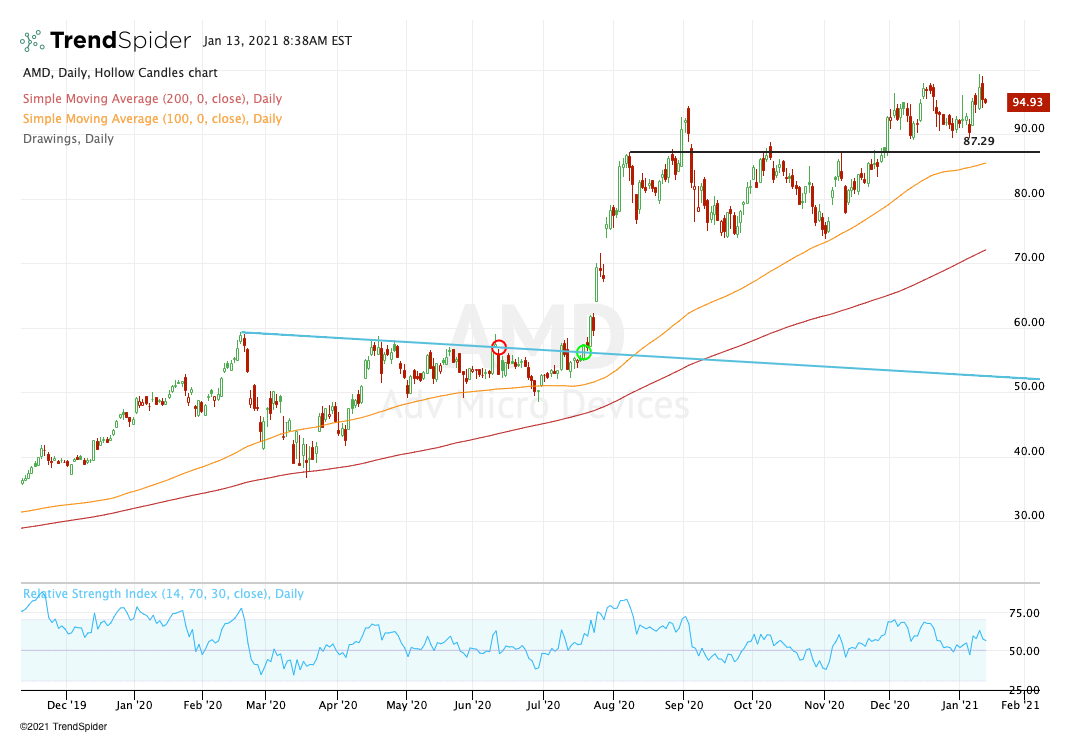 The truth is, AMD stock can be rather hard to pin down when it comes to trading. It does trade quite well in regards to the technicals, but it has a tendency to give a lot of false moves.

That is, it appears to break down only to snap back and reverse higher, or it appears to break out, only to reverse lower. The latter has played out this week, with shares climbing to new highs on Jan. 11. However, the stock failed to close at those highs and pulled back in the next session.

Does that mean the run is over? Not at all.

Look at the way AMD stock tends to trade. It goes on these big runs, gaining a tremendous amount of ground, then consolidates. Sometimes that consolidation is a few weeks. Other times it’s a few months.

Shares consolidated for the entire first half of 2020, erupting from the mid-$50s in July to the mid-$80s a month later. Then AMD stock traded sideways before jumping higher in December.

That’s the pattern here. Look for these consolidation patterns as AMD is resting for the next move. These are opportunities for investors and when the stock does dip, it’s constantly met by support.