What if one year ago, you knew that over the course of 2020, a pandemic would shut down much of the global economy – creating the steepest economic contraction since the Great Depression…

Violent protests would occur in dozens of American towns and cities…

The U.S. Federal Reserve would cut interest rates effectively to zero and print roughly $3 trillion to support the economy and the financial system…

And Congress would sign off on an unprecedented $2 trillion stimulus package – mailing personal checks directly to people’s homes.

Assuming you knew all this one year ago, what would have been your guess for the performance of various asset prices this year?

Today, the U.S. stock market is more expensive – and therefore riskier – than at any time in the past century. You must understand that risk… because last year’s roller coaster ride isn’t over yet…

The stock market soared 68% off its March bottom last year. Would you have thought new all-time highs were even a remote possibility after that precipitous drop?

Would you have thought that despite a raging pandemic, political upheaval, and civil unrest, stocks would surge to their most expensive valuation in history – even more expensive than the 1929 and 2000 market tops? 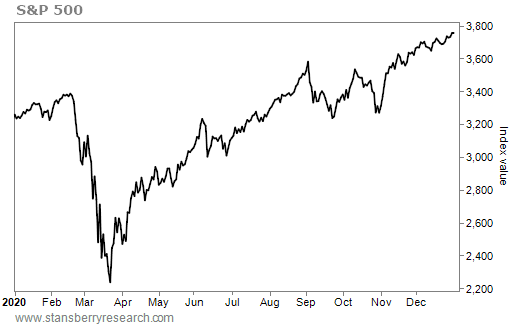 The stock market has made higher highs since I got bearish in 2017… But it has also made lower lows. In other words, a wide range of outcomes occurred.

The more expensive stocks become, the riskier they are to own. And that’s what we’re seeing today… 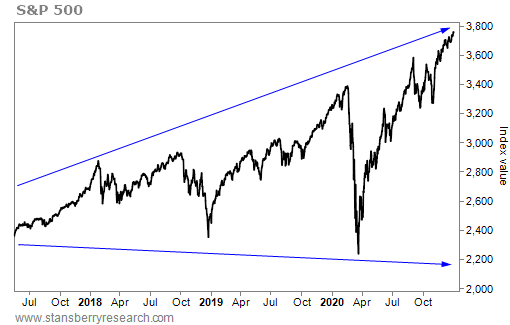 The best two metrics to demonstrate how expensive stocks are today are the S&P 500 price-to-sales (P/S) ratio and the ratio of total U.S. market cap to U.S. gross domestic product (“GDP”).

Over the past century or so, whenever the P/S ratio has been high, the market has tended to perform poorly, sometimes for many years. At the peak of the dot-com bubble in March 2000, the P/S ratio was 2.3. Today, it’s about 2.7.

I also follow the stock market valuation work of economist and asset manager John Hussman of HussmanFunds.com. He tracks five metrics, including the P/S ratio, that have all correlated negatively over the past century with subsequent 10- and 12-year S&P 500 performance. Roughly 90% of the time when they’ve been high, the S&P 500 has performed poorly for a decade.

Presently, I expect that the completion of this market cycle is likely to involve a loss in the S&P 500 on the order of 65-70%. I realize, of course, that this sounds insane. The problem is that this projection is fully in line with a century of evidence and is consistent with the extent of market losses that would be run-of-the-mill given present valuation extremes.

GMO’s seven-year annual return estimates for all U.S. equities and bonds, international large-cap equities, and international bonds are negative. Its only attractive forecast is for value stocks in emerging markets, at 9.1% per year.

With stocks more overvalued than at any time in the past century, it’s time to plan accordingly. Risk is high today… And we’ll likely see years of underperformance when this bull market ends.