One century ago, America emerged from the Spanish flu, the last great pandemic until COVID-19.

What followed was one of the greatest decades of economic prosperity in the history of the United States. Now here we are almost exactly a century later, again emerging from a pandemic.

Could it possibly be that, 100 years later, we get a sequel to the Roaring ’20s?

Nobody had any idea how bad the pandemic was going to be.

Money on deposit with banks rocketed higher at a record rate.

You can see the deposit surge of $3 trillion in the chart below. 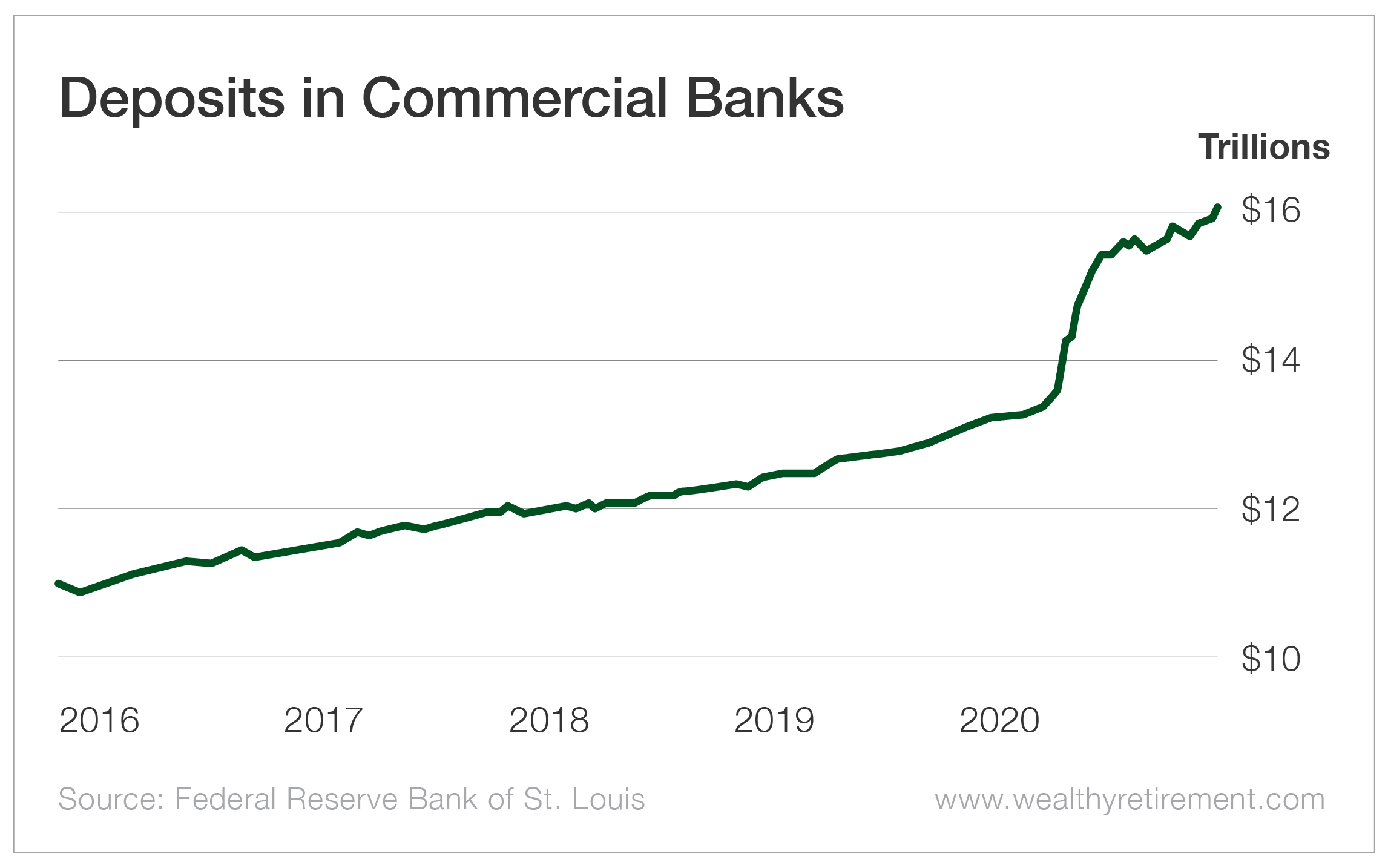 Americans have never had anything close to this much cash sitting in their savings accounts earning nothing.

This buildup of cash is a continuation of the financial strengthening that Americans have been working on since the financial crisis more than a decade ago.

After peaking in 2007, personal debt as a percentage of disposable income for Americans is now lower than it has been in a quarter of a century. 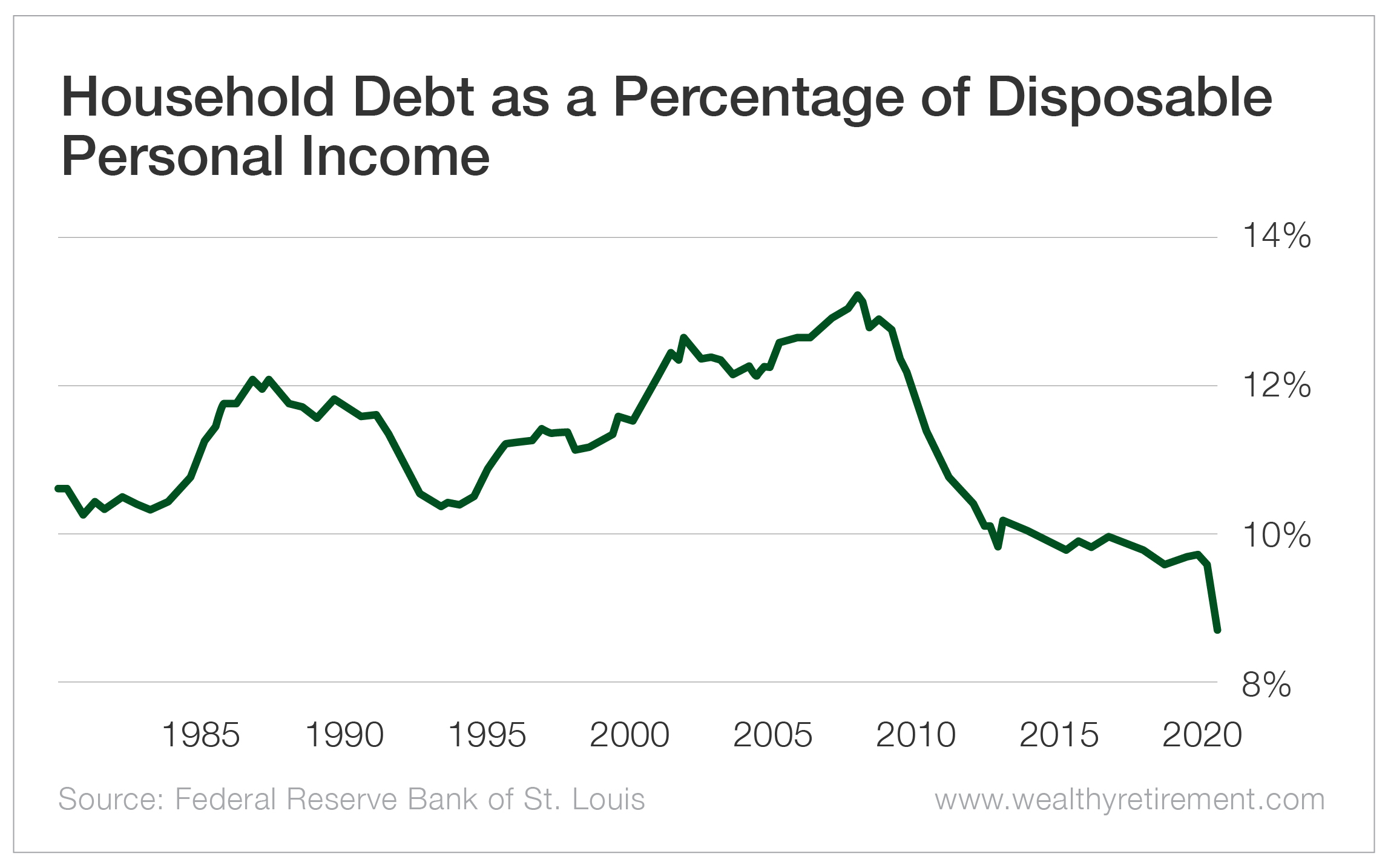 Between the record cash in savings accounts and reduced personal debt levels, Americans have a lot of financial firepower.

There are lots of Americans who are hurting financially coming out of the pandemic, to be sure.

But these numbers show that, on average, Americans are now more loaded with cash and have family balance sheets that are in better shape than they have been in a generation.

That is bullish for the economy.

Central Bankers Are Priming the Boom
Americans’ hoarded cash will be the firewood that gets the economy burning hot.

The Federal Reserve will supply the gasoline that turns it into a raging fire.

The Fed has already said that it has no intention of raising interest rates until 2023 at the earliest. Mortgage rates are setting new record lows every week.

It’s also important that President-elect Biden has nominated Janet Yellen to be his Treasury secretary.

For years now, the Federal Reserve has been complaining that interest rate policy can only achieve so much toward stimulating the economy.

The Fed has been banging the drum that it also needs the government to more carefully direct the spending of all the money being printed.

Now that is finally going to happen.

Yellen is the former head of the Federal Reserve. She is on board with what the Fed wants.

For the first time, we have a Treasury secretary and a Federal Reserve that are going to be on exactly the same page. That could be another powerful combination for the economy.

The “Green Revolution” Timing Is Perfect
Coming out of the pandemic, governments across the world are desperate to spend to stimulate the economy and to create jobs.

In 2021, the green revolution is the one thing that virtually every government in the world agrees is worth spending on.

Agree or disagree, the world is going green. Now is the inflection point when the green revolution gains critical mass.

To go green, we have to spend trillions upon trillions building out the necessary infrastructure.

Pick a country, and you can bet it is spending big money going green.

Even the oil and gas majors are getting on board.

BP (NYSE: BP), for example, has announced that it will reduce its oil and gas production by 40% over the next 10 years.

All of the spending that BP would have been directing at drilling for fossil fuels will instead be used to get into the renewable energy game.

We are here, folks…

The green revolution is at hand, and it is bullish for the Roaring ’20s economy.

It Has Been Awhile, and Optimism Feels Great!
Since the financial crisis ended in 2009, we have had a long period of tepid economic growth.

Making macro calls is risky, but there are so many good reasons to believe that the end of the pandemic will usher in an era of growth.

It has been hard to be optimistic for a long time now. It feels good to finally see that better times are coming.

A booming economy means a booming stock market, and I can’t wait!