The letters and numbers were flying past me as traders shouted at me to execute their orders.

How were these guys making sense out of the seemingly random price action coming across their screens?

I was a newly minted assistant on the trading desk, and my job was to execute trades on behalf of traders, watch the markets and alert the traders to any trends that I saw.

The first two tasks were no problem. But I had a tough time seeing how those moving prices on my screen could be interpreted and lead to a decision to buy or sell stock.

I’d like to tell you that after a lot of studying and hard work, I finally got it. But I’d be lying. A year later, I was as clueless as I was on my first morning.

And then one day, a trader showed up on the desk with a new data source.

And when he hit “3” on the keyboard, the stock’s chart came up. He’d quickly toggle between a daily chart, an hourly chart and a five-minute chart.

I was enthralled. I peppered him with questions: “What does that mean? How do you know when to buy or sell?”

Without looking up from his charts, he snapped, “Go learn some technical analysis and then come back to me.”

Technical analysis? I had no idea what he was talking about. There was no Google back then. So I spent that weekend at the library devouring everything I could on technical analysis – the study of stock charts (or charts of other financial instruments).

I enrolled in a class on technical analysis at a local university, and I was hooked.

All those random numbers I saw on my screens could be used to create a chart that would show patterns, trends and even price targets.

Importantly, I learned that those charts are visual representations of human emotion – greed and fear. And those emotions repeat in patterns and are somewhat predictable.

I became obsessed with improving my skills. I was fortunate that I had access to some of the most legendary technical analysts in the world. It was like discovering a love of baseball and speaking to Babe Ruth, Ted Williams and Ken Griffey Jr. every week.

At first, I thought I’d found a crystal ball that would lead me to riches. But what these legends taught me, and what my hours and hours of study showed me, is that charts are not foolproof.

But what they are very good at is revealing patterns and helping traders find the points of maximum reward and minimum risk. 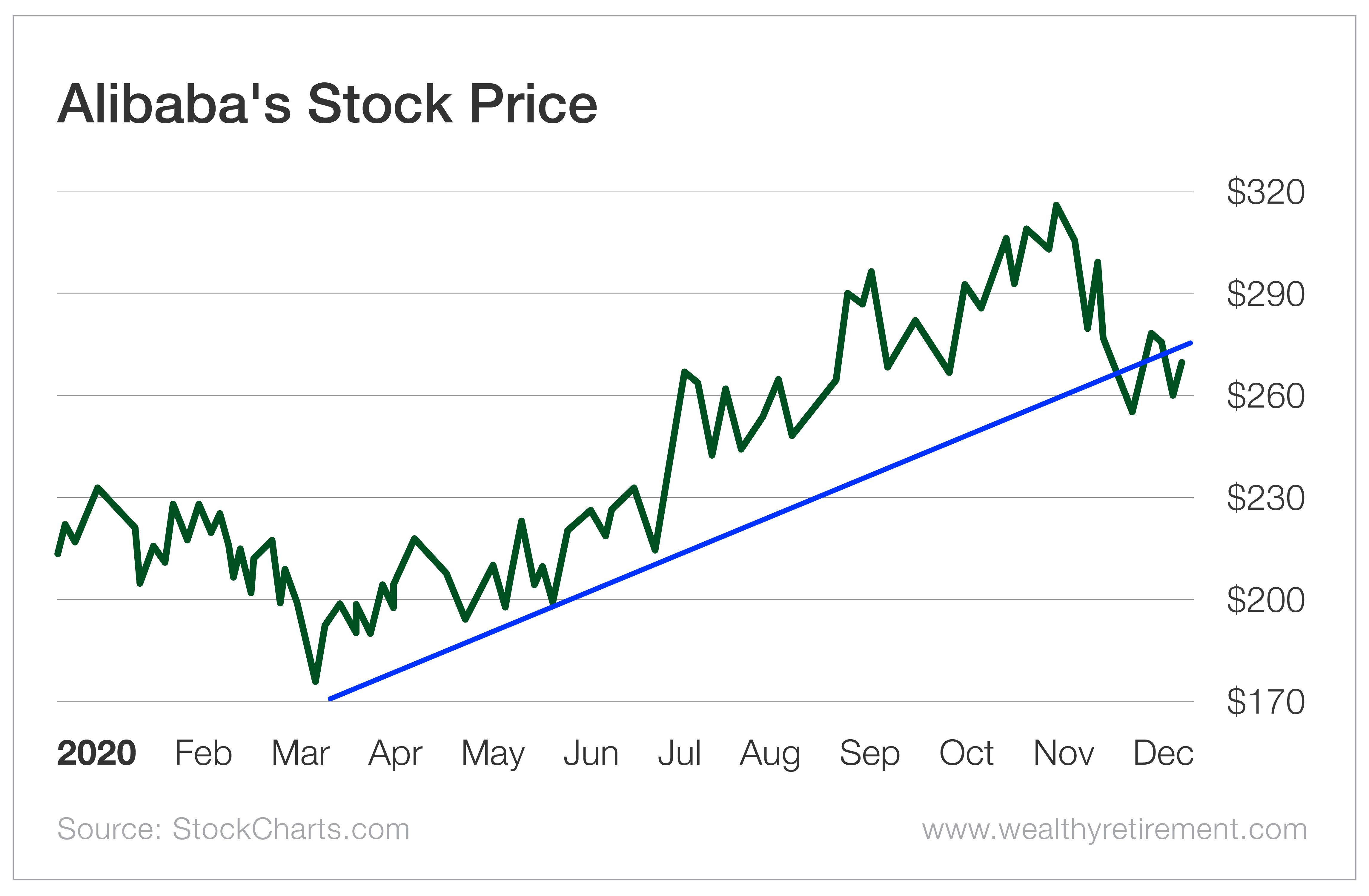 You can see that starting in late March, the stock started to move higher. Let’s say that in June, you were looking for a good entry point.

If you drew a trend line, which is a straight line connecting the lows of the stock, you’d see that it’d be best to buy the stock when it came down to the trend line because in the past, it had bounced off that area of support.

(Support is a price level where investors and traders come in and buy the stock, “supporting” it.)

In late June, you could have bought the stock at $240 and eventually made money. But if you waited until the stock came back down to its trend line, you would have done even better…

You’d have bought it at around $210 and ridden it higher for months, as the stock didn’t break the trend line until November.

When a stock breaks a trend line or other support, that is a sign that the psychology around the stock has changed.

We don’t necessarily know if it’s because the company’s earnings are down, the CEO was arrested or a new competitor has emerged – and to be honest, we don’t care. We just know that the psychology of investors has changed, and we need to think about getting out.

Let’s say in October, you were interested in Alibaba. You could have bought it at $310 and then watched it fall all the way to $250, taking a sizable loss.

If you waited for the stock to come back down to the trend line, you’d have bought it at $270. Then the stock did in fact break the trend line, signaling that the uptrend that had been in effect since March was over. That was a sell signal, and you’d have gotten out with a small loss instead of a large one.

This was just a very simple example. There are many, many ways to use technical analysis.

Twenty-two years ago, I was told, “Go learn some technical analysis.” I’m still studying it every day. I can’t imagine making a trade without it.