It crossed the 30,000 mark for the first time ever last month. While the number itself is symbolic, the rally we’ve seen in recent months has been nothing short of incredible.

The Dow is up 63% in just nine months since the March bottom. And that blistering rally has a lot of folks questioning what happens next.

That’s not a wild prediction, either. It’s simply a bet that history will prove to be correct once again.

You see, the 30,000 level is a major breakout. And when major breakouts happen, more gains usually follow. In fact, 100 years of data show us more outperformance is likely from here.

That means Dow 40,000 could be the next stop. And you really want to own stocks now.

The Dow has made an incredible move higher in recent months. Again, it’s up 63% since bottoming in March.

That kind of rally is amazing for a major index. And it’s even more impressive given what has happened in the economy and around the world during that time.

Now, you might think that the rally has to cool down soon… or that a pullback is likely after such a strong run higher. You might even think that hitting the 30,000 milestone is itself a warning sign of a coming decline.

History says that’s not the case. Instead, buying after new highs is a good thing.

Since 1920, the Dow has continued to outperform after hitting a new 52-week high. And as the chart below shows, we have this exact setup today. Take a look… 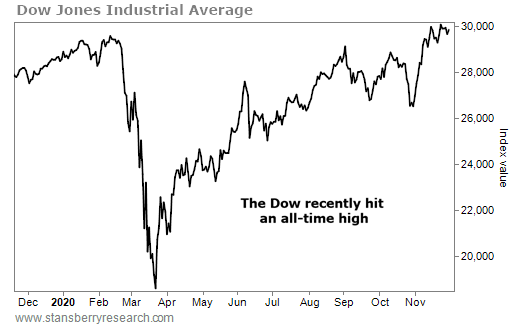 This rally has been strong. The Dow is back in uncharted territory as it hits new all-time highs. But this breakout doesn’t mean the rally is over…

Buying after similar new highs has led to winning trades 74% of the time. And history shows that at times like these, you can expect to outperform in the months ahead. Take a look at the table below…

The Dow has returned about 6% a year since 1920. But it performs even better after new 52-week highs like today’s…

Similar cases have led to a nearly 5% gain in a typical six-month period. And they can lead to an 8% gain over the next year. That’s significant outperformance.

Those are the gains you might normally see after this kind of setup. But if the trend continues like it is right now, the gains could be much higher… The biggest move after one of these instances was a 48% gain. That would be more than enough to eclipse the 40,000 level in the Dow.

I’m not betting that will happen in the next year. We can’t know for sure what’s going to come next for U.S. stocks. But the smart bet isn’t on a crash… It’s on higher highs from here.

The Dow has plenty of room to run. And 40,000 could be the next stop. Either way, you want to own stocks now.