Markets have been breaking out around the globe – even ones that most U.S. investors ignore…

The big catalyst was the positive vaccine news we’ve seen in recent weeks. We now have not one, but two potential vaccines with a 95% efficacy rate in early testing. And on Monday, trial results came out for a third candidate, too.

A successful vaccine would give us the first hope of a post-pandemic world. It would be a huge win to help stop the spread of COVID-19 and help strengthen our economic recovery.

Simply put, this means we could actually – finally – start getting back to normal. And that’s exactly what the investment world – and everyone else – wants to hear.

As the rally kicked off in global markets, one stood out among the rest…

Japanese stocks recently hit their highest level in roughly 30 years. This is an often-forgotten market. But you don’t want to forget about it today.

The recent breakout is a big one. And based on the momentum alone, history shows more outperformance is on the way.

Most U.S. investors stick to the U.S. in their portfolios. This “home-country bias” causes us to ignore investments from overseas.

Japanese stocks definitely fall into that category. But given what’s happening right now, ignoring this market is a bad idea.

The Nikkei 225 Index is the benchmark index for Japanese stocks. It holds a basket of Japan’s largest and most important companies.

Importantly, the Nikkei has been on an absolute tear for almost eight months. The broad Japanese index is up roughly 60% since March.

Now, though, this rally is starting to heat up even more. The Nikkei has been on a one-way move higher since the end of October. And earlier this month, the index broke out to a three-decade high. Take a look… 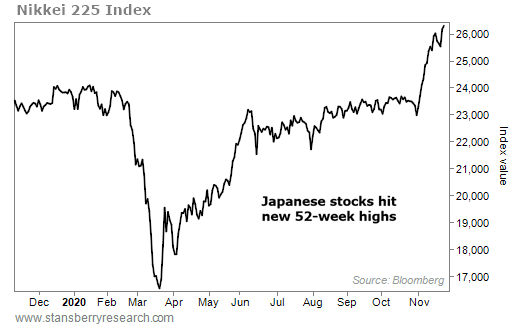 The recent rally sent the Nikkei 225 to its highest level since 1990. And even better, history says this strong uptrend is a sign of more gains to come.

Since 1980, similar breakouts have led to winning trades 74% of the time. And they can lead to real outperformance. Check it out…

The Nikkei hasn’t been a standout performer over the last 40 years… with a typical annual return of 3.3%. But buying after a big move like today’s can significantly increase your upside potential.

Similar instances have led to nearly 4% gains in three months, 5% gains in six months, and nearly 8% gains over a year. That’s much better than a measly annual return of 3%.

If you want to take advantage of this setup, you can do so easily with the iShares MSCI Japan Fund (EWJ). It’s a simple fund that tracks the Japanese market.

Simply put, Japanese stocks are breaking out in a big way. The Nikkei recently hit its highest level since 1990. And more upside is likely over the next year.

This is a market that many U.S. investors ignore… But you shouldn’t make that mistake today.