Not that long ago, I believed that the best store of value for most folks was a simple mixture of cash and U.S. government bonds…

Whatever funds investors might want to access in the short term would be in cash. Then, the rest could generate safe, sturdy income in longer-term U.S. Treasurys.

I’ve always been averse to holding too much of your portfolio in cash for two reasons.

First, the opportunity cost – every dollar hidden under your mattress is one not generating excellent compounding returns in the stock market.

Second, cash is not a perfect store of value given inflation.

This is especially important to understand right now… And with the coronavirus pandemic still wreaking havoc on our lives and the economy, it means every investor should own at least a little of one specific asset today.

For a variety of (mostly sound) reasons, our central government and the U.S. Federal Reserve employ policies that intend to generate modest inflation in our economy each year.

That means the purchasing power – or value – of cash declines substantially over the long run. In fact, since 1913 (the year the Fed came into existence), the dollar has lost more than 96% of its purchasing power. 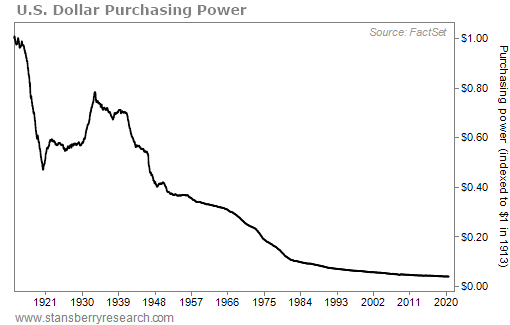 As for U.S. Treasury bonds, their attraction over time has come not only from their relative safety, but also from the interest payments they provide that generally exceed the rate of inflation.

Specifically, from 1980 to 2019, there were only a couple short instances where the yield on the 10-year U.S. Treasury note was not greater than inflation (as measured by the U.S. Consumer Price Index, or “CPI”)…

This meant that you could generate a real rate of return on a safe store of value. And it would be in excess of the purchasing power declines brought on by government-organized inflation. But as you can see, unfortunately, that’s no longer the world we live in…

Today, the global economy is in a recession. Central banks around the world are printing trillions of dollars of paper currencies. Debt levels are soaring. And the yields on those government debts have fallen to near zero, even going negative in many countries.

So with government bonds no longer providing any real rate of return, investors have been searching for other stores of value.

Gold has been a precious, durable, and trusted store of value for centuries. And in a world where bonds provide no yield – and where it’s easy to print a near-limitless supply of new dollars but difficult to produce new nuggets of gold – the precious metal should really flourish.

But here’s something that might surprise you… Bitcoin will likely do even better over the long run.

Bitcoin is a new and improved digital gold. Just like gold, it’s a precious, durable, and increasingly trusted store of value. But on top of that – as I shared last week – the creation rate of bitcoin will never increase, and its total supply is finite.

Thus, I can see bitcoin becoming for millionaires what fine art has become for billionaires – when they aren’t making any more, only those who are willing to pay higher and higher prices will be able to buy and own a real Picasso or Matisse (or bitcoin) for themselves.

Governments want to control those types of exchanges, after all. And giant financial firms like Visa and Mastercard have already built payment networks that are ubiquitous, trusted, and near-universally adopted.

But to be an incredibly desirable and portfolio-enhancing asset, bitcoin doesn’t have to fulfill that promise. Instead, it need only fulfill its inevitable use case as a digital store of value.

And in a post-pandemic world where government stimulus debases currencies and government bonds yield zero or even negative rates, I believe bitcoin will prove to be the ultimate store of value among all assets… digital, precious metals, or otherwise.

This Stock Could Double in Less than 3 Years

Trade This Stock for a Potential 100% Return by mid-March

History Shows Buying These Stocks is a Good Idea

Upgrades and Downgrades for Wednesday, 1/27