A couple of months ago, we celebrated that at 90 years of age, Warren Buffett had made the greatest single stock market investment in history.

Over a period of two years, Buffett had turned a $35 billion initial investment in Apple (Nasdaq: AAPL) into more than $120 billion.

That is the biggest single win in the history of stock market investing.

It was no secret that Buffett was gobbling up shares of Apple hand over fist from 2016 through 2018.

We all should have been paying attention and doing the same thing.

We may have missed that trade, but not to worry…

The Oracle of Omaha’s next big trade is here, and it is a no-brainer for investors to join him on.

Every Few Years, There’s an Investment Buffett Really Loves
For 20 years, I have been a student of Warren Buffett.

I’ve read every one of his Berkshire Hathaway (NYSE: BRK-B) shareholder letters that date back to 1965 multiple times. Same thing for the letters he wrote to the investors in his Buffett Partnership that ran during the 1950s, where he put up astounding investment returns.

I have a file on my computer that contains the transcript from every annual meeting dating back decades.

If there has been a book written about Buffett, I’ve read it.

You get the point. I’m familiar with how the man invests.

And Buffett’s recipe for success has not changed much over time.

He is incredibly selective when buying stocks. His portfolio is concentrated, and he waits until he is certain that he has a great investment opportunity before he deploys his hard-earned capital.

Then, when he buys, he usually buys big.

Berkshire Hathaway’s third quarter earnings report was just released. In it, we learned that he is buying one stock more aggressively than any other he has purchased since unloading $35 billion into Apple…

Why Buffett Has the Ultimate Edge
For the first time ever, Buffett is buying back a ton of stock in Berkshire Hathaway.

I’ve written previously about how terrible most companies are when it comes to buying back stock.

That means most companies are buying back shares at the worst possible time: when they are expensive. Then they have no cash to repurchase when their shares are undervalued.

This is the greatest capital allocator in the world.

Buffett has written repeatedly about how powerful share buybacks can be for shareholders when a company uses them selectively. He understands more than anyone when it is time to repurchase shares.

And right now, he is sending us a table-pounding sign that he believes his company is tremendously undervalued.

In the third quarter alone, Buffett repurchased $9 billion worth of Berkshire shares. That brings the total so far in 2020 to $16 billion. 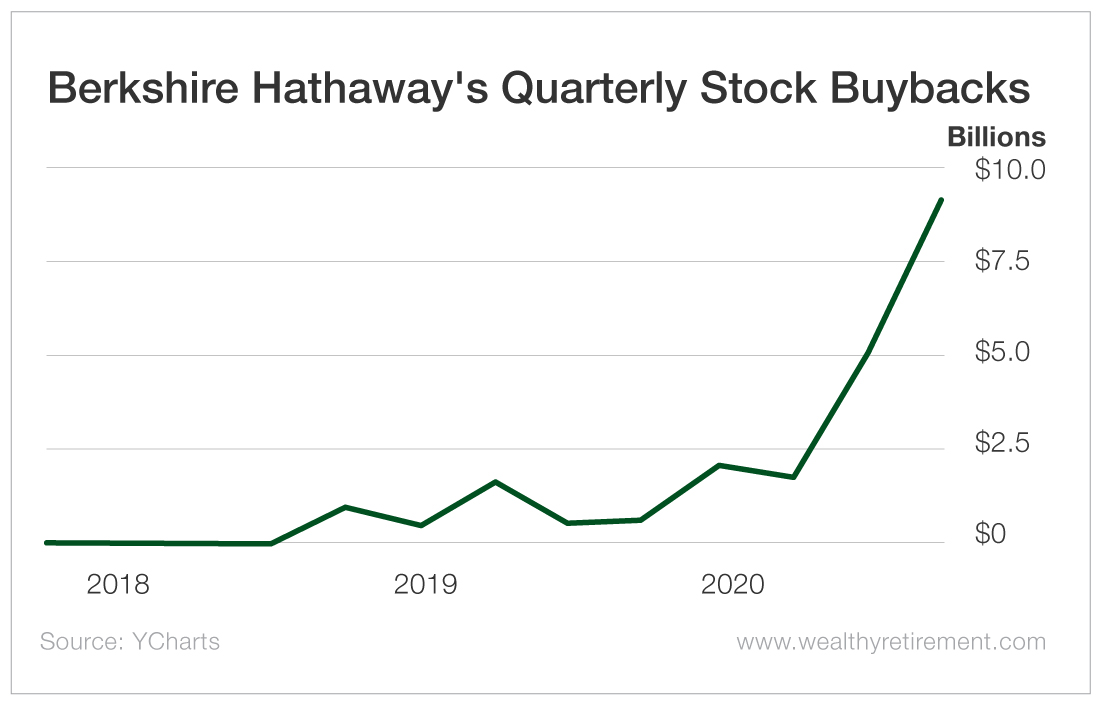 At no point in his 50-plus years at Berkshire has Buffett ever bought back shares at anything close to this rate.

What bigger buy signal could you ever want than the greatest investor ever, for the first time ever, aggressively buying the company that he knows better than anyone else on the planet?

Thanks for the stock tip, Warren…