Berkshire Hathaway (NYSE:BRK-A)(NYSE:BRK-B) issued its third-quarter earnings report recently, and for the most part, there weren’t too many big surprises.

For example, the company’s earnings were up because of strong stock performance, Berkshire’s operating businesses are generally performing well, and while the company’s cash hoard declined a bit, it wasn’t by a huge amount.

Generally speaking, we don’t get a glimpse of what stocks Berkshire is buying or selling until it files its latest 13-F with the SEC, which isn’t due to happen for a few days (it is required 45 days after the end of the quarter, which means we’ll see it by Nov. 14).

But we did find out one stock purchase Berkshire made during the third quarter: Berkshire Hathaway. And it bought a lot of it.

During the third quarter, Berkshire bought back nearly $9.3 billion of its own stock. That’s the most Berkshire has repurchased in a single quarter ever, and by a wide margin. This was on top of the $5.1 billion worth of stock Berkshire repurchased in the second quarter, which was the company’s previous single-quarter buyback record.

Berkshire not only reports the number of shares bought back and the total price it paid, but it also breaks it down by month and the average price it paid per share. Here’s a month-by-month breakdown for the third-quarter buybacks: 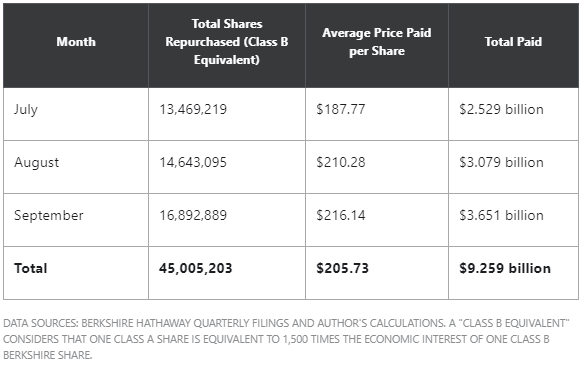 What does this mean to investors?

To put it mildly, this is an aggressive buyback. Berkshire bought back just shy of 2% of its outstanding stock in the third quarter, after an already aggressive total in the second quarter.

If you aren’t familiar, Berkshire modified its buyback plan a couple years ago to authorize the team to buy back shares at any time Warren Buffett and vice chairman Charlie Munger agree that the stock is trading for a significant discount to its true value.

Here’s the key takeaway for investors: Look again at the chart of buybacks, and specifically the prices Berkshire paid to buy them back. Two of the best value investors of all time apparently felt the stock was very cheap at those prices.

Particularly interesting is that as Berkshire’s stock price started to rise throughout the third quarter, Buffett and Munger didn’t pump the brakes — they bought back more at the higher prices.