They were the hot topic as the COVID-19 crisis got going. Legendary investor Warren Buffett dumped all his airline stocks – and regular folks followed. But now, the plight of airlines is old news.

There has been no shortage of other events for people to follow. The presidential election has pushed airline headlines aside.

And the COVID-19 health crisis is ongoing.

That makes it easy to assume that the state of the industry is the same: terrible.

To an extent, that’s true. But now, something is happening that you need to be aware of.

It’s easy to overlook – but it’s also incredibly important. That’s because it gets to the core of how markets work.

The reality is that there’s a “secret recovery” happening in airlines. And understanding this pattern is crucial for investors.

We’re now eight months into COVID-19 in the U.S… Yet airlines still exist.

So far, the major carriers have avoided bankruptcy. And we’re starting to see an uptick in key air traffic metrics.

Don’t feel bad if you missed this. Most people have. And as investors, believe it or not, that’s what we want…

You see, there’s a recipe that goes into great investment opportunities. That recipe is finding investments that are “cheap, hated, and in an uptrend.” My colleague and mentor Steve discovered this early in his career, and it’s still true today.

This is where we are in the airline industry. Investors have focused on the bad news. They only see the event that damaged the industry.

In big shake-ups, the bad news can feel overwhelming. And eventually, investors throw up their hands and walk away.

At that point, the market is more than hated… it’s abandoned. But that’s when you find the potential for the biggest turnarounds.

You can see this happening in the airline industry through the U.S. Global Jets Fund (JETS). It’s an exchange-traded fund that holds America’s top airlines.

JETS tumbled 62% from its peak in February to its bottom in May. That’s not surprising given the circumstances. But since then, the beginnings of a “secret recovery” have taken hold.

Southwest Airlines (LUV) is the darling of the airline industry because of its debt structure. Its stock is up more than 65% since bottoming in May.

In fact, it has recently crossed above its 200-day moving average. This simple measure means that the company is in a definable uptrend.

JETS is on the rise, too. It’s nearing its 100-day moving average. But you don’t have to rely on chart reading to see which way the wind is blowing.

The Bureau of Transportation Statistics has numbers that show signs of a recovery are underway. Take a look… 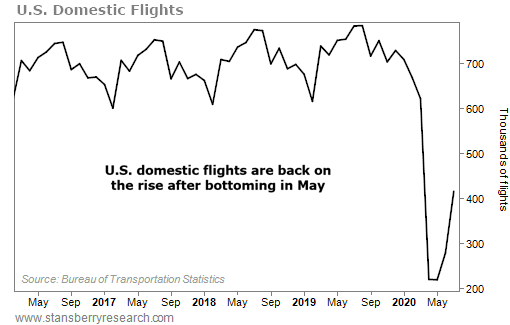 U.S. domestic flights fell off a cliff as COVID-19 took hold. The chart shows that. But it also shows that the number of flights is roaring back.

The government provides another stat that backs this up. It’s called “revenue passenger miles.” This is how the industry measures miles traveled by paying passengers.

The Revenue Passenger Miles chart looks the same as the one above. That’s what we want to see. It tells us that there are people flying on those planes.

All of this together makes for a pretty darn compelling “secret recovery.” And it’s situations like this that can lead to the greatest returns.

Now to be clear, I’m not telling you to rush out and buy airline stocks. There are still tremendous risks in this sector. Bankruptcies are still possible… And rising cases of COVID-19 loom large in the U.S. right now.

Still, it’s good to know that the data on the sector tells a much different story than the general consensus.

The consensus view is that the airlines are dead… But in reality, a “secret recovery” is underway. That makes this a trend we should pay attention to today.